The Case of the Smuggled Chinese

IMMIGRATION officials here would welcome a visit from the Canadian Bar Association subcommittee that presented a stinging report on the Immigration Department last September. They think they could show the lawyers that out here on the edge of China problems keep turning up that are not in the book.

They’re sure, for instance, that the committee had Hong Kong in mind when it charged that “Canadians” are prevented from returning to Canada by officials who refuse to accept their birth certificates as proof of nationality. This sounds bad, and if has certainly happened in Hong Kong many times. One such case involved the client of a member of the Bar Association subcommittee.

However, her case was not as simple as she may have led her lawyer to believe. She was a young Cantonese, and she came in with the birth certificate of a Chinese girl who had been born in Canada but had çome back to China as a small child.

The birth certificate was genuine enough. The question was: Who was its rightful owner? The woman who ^presented it couldn’t answer any questions about her family. She didn’t know where her father had come from in China, where he was now, when he had first gone to ;4fcnada -in fact she didn’t know *hing about him. The Immigra'^epartment had spent some , finding out the correct answers hese and other questions, and the applicant didn’t know them vas turned down, onths later she turned up again, time applying for admission as ife of a Chinese legally resident añada. There was no doubt

about her right to immigrate in that category she had her young husband with her, he was incontestably Canadian and her application was granted. But before issuing her passport the immigration officer asked her what her real name was, and why she had presented a Canadian birth certificate the first time.

Once she was assured that she wouldn’t be barred from Canada now, she told her story readily enough. She had bought the Canadian birth certificate in Canton for nine hundred U. S. dollars.

But why? If she was entitled to go to Canada as a wife, why pretend to be a Canadian?

Perfectly simple, she said. To come all the way to Hong Kong to marry her and take her back to Canada, her fiancé had to spend about $1,300 on a return ticket by air. Since the birth certificate cost only $900, they’d have been $400 ahead if the plan had worked out as they expected.

IT ISN’T always as cheap as that. Chinese who need a Canadian birth certificate urgently sometimes pay three times as much.

A few months ago two Chinese employees of the Sino-British Corporation in Hong Kong embezzled $260,000 in Hong Kong dollars and disappeared. Later one of them was picked up in Winnipeg, where he had gone as the “son” of a Winnipeg Chinese. In return for a promise of leniency he told the whole story of his entry into this country.

The embezzlers each had paid $2,700 for complete sets of papers certifying that they were the twentyfive-year-old sons of two Canadian Chinese, Continued on pane 28

one in Winnipeg and one in Vancouver. As a matter of fact they were twentyeight; the parents of one lived in Canton and the other’s whole family including wife and children were in Hong Kong. For a share of the $2,700 the two Canadian Chinese were willing to apply for them as sons; other Chinese were willing to sign declarations that they knew the families; and professional immigration agents in Canada and in Hong Kong would handle it to make sure nothing slipped up.

As a matter of fact it was because she tried to save the agent’s fee that the young bride-to-be failed to get in as a native Canadian. The agent would have supplied her with a verbatim transcript of the questions asked by immigration authorities in Canada, together with the correct answers.

Not long ago officers of the U. S. Immigration Service raided the offices of one such agent in Hong Kong. They found, and turned over to Canadian authorities, several complete booklets of questions and answers prepared for Chinese who had applied for admission as native Canadians, and who in fact had been admitted months before. The applicant is supposed to memorize the whole booklet; then he is sure of being able to give the right answer to every question the immigration officer puts.

This same raid brought proof of something both Canadian and American authorities had suspected—that the real destination of many phony Canadian immigrants is the U. S. The U. S. officers seized a file of correspondence about two brothers who had gone to Canada as the sons of two different men, one in Windsor and one in Toronto. The file included correspondence not only with the fake fathers in Canada but also with the boys’ real grandfather, who lived in New York and to whom the boys were destined.

Incriminating items like that are rare; normally the agents leave nothing to chance. U. S. officials recently started taking blood tests as added proof of identity—if a man claimed parents who had Type A blood and he himself had Type O blood, obviously he was a fake. No sooner had the U. S. introduced this system than Hong Kong agents began to give blood tests of their own. Now, when a Chinese buys a set of immigration documents, he can be sure the blood types of all “relatives” mentioned in the papers will be the same as his own.

Agents can offer a wide selection of birth certificates and other documents to their customers because, of course, the papers are made up on a wholesale basis, not designed for any one immigrant. The agent in Canada recruits a Chinese father, gets from him a complete set of the information he has given to the Immigration Department about himself and his “child” and sends the whole package to Hong Kong. It can then be sold to any Chinese whose age and circumstances fit the documents; he memorizes the questions and answers, and he’s ready to go.

COMPETITION between Hong Kong agents sometimes produces curious results. One such case is puzzling the Hong Kong immigration office now, as it has been ever since 1948.

country of which he is a citizen by birth.

The only trouble is, there are not one hut three applicants all claiming to be Ng Chue Yue. One has a birth certificate issued in Victoria in 1932, bearing the proper seals and signatures and the photo of a cute little Chinese boy. Another has a birth certificate issued at Victoria in 1950, giving the same name, place and date of birth. Both documents are obviously genuine, the second apparently a true official copy from the same records as the first. Each of these birth certificates is accompanied by an impressive set of affidavits from leading Chinese citizens, one set in Vancouver and the other in Windsor, Ont. Both sets claim to know the boy and his father intimately.

The third applicant also has a birth certificate, but he produces a woman who says she is his mother; that she lives in Vancouver; that this is indeed her dearly beloved son; and that she wants him to come back home to Canada.

Knowing how easily documents can be bought and sold, the Canadian immigration officers decided that the man with the real live mother was probably the true Ng Chue Yue. They were all ready to give him a passport and let him set off for Canada. But, just at the last minute, one of the clerks in the office noticed something familiar about the man’s appearance. She dug into the files, found that in 1949 the same man—with a different father and mother—had applied for admission to Canada, not as an immigrant but as a native Canadian. Why?

So far, they haven’t found the answer to this question and the question of Ng Chue Yue is right back where it started in 1948. Meanwhile the lawyers for all three Ng Chue Yues are impatient and indignant with the bureaucratic delays preventing their client, or clients, from entering Canada.

THEORKTICALLY, at least a quarter of a million Chinese are eligible for admission to Canada as somebody’s son or daughter.

They’re admissible up to the age of twenty-five by order-in-council, and up to twenty-one without any special procedure. This means that all of the approximately 40,000 Chinese who were in Canada twenty-five years ago can claim to be parents of admissible children.

Most Chinese made about three trips home to China during that 25-year interval, and the trips averaged two years each in duration. This means each trip could account, theoretically, for the birth of two or even three children. Averaging it out at two and a half children per man per trip, you get a theoretical potential of 300,000 immigrants.

In fact they are coming at a rate of about 180 a month, a flow that has been fairly steady for the past five years. Each year, of course, the birth date of the oldest admissible “child” falls twelve months later in 1955 the 1930 crop will he the oldest, in 1956 the 1931, and so on. On the other hand, by the time the last “unmarried child under twenty-five” has entered Canada, the first to arrive will be old enough to go back to China, get married and bring in their wives.

What with one thing and another, it looks as if Canadian Pacific Airlines can count on full bookings for their eastbound flights across the Pacific for a good many years to come. ★ 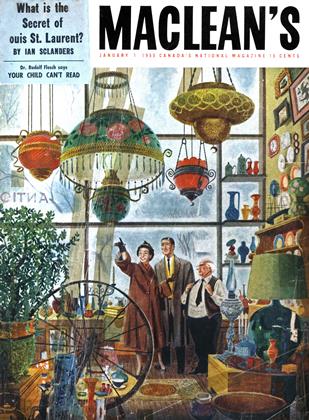