TRIAL: A hard-hitting realistic drama which shows with disturbing clarity how political racketeers skilled in the black arts of showmanship can flourish under the protection of the very laws they despise. Don M. Mankiewicz adapted his own novel for the screen. The expert cast includes Glenn Ford, Arthur Kennedy, Dorothy McGuire, John Hodiak, and an actor named Juano Hernandez whose portrayal of a Negro judge presiding in a hate-filled court is something to haunt the memory.

PETE KELLY’S BLUES: Jack Webb’s first movie since Dragnet offers the tight-lipped actor-director as a Prohibition-era jazz bandleader whose personal devil is a gangster (Edmond O'Brien). Jazz fans, except the ultra-cool school, will enjoy the music, and the film is well worth seeing as well as hearing in spite of several contrived and incoherent touches. With Ella Fitzgerald, Peggy Lee.

THE PRIVATE WAR OF MAJOR BENSON: A coy, moderately amusing comedy about a tough soldier (Charlton Heston) in a school for boys. Tim Hovey, as a six-year-old private, is prominent among the cadets.

TARZAN’S HIDDEN JUNGLE: A beaming ex-lifeguard named Gordon Scott makes a likeable but implausible debut as apeman No. 1 1 in a series that has prospered without interruption since 1918.

TO CATCH A THIEF: Boudoir shenanigans and rooftop skulduggery are the main ingredients in moviemaker Alfred Hitchcock’s latest. It’s hardly one of his best, but it’s not half-bad — and the French Riviera, in VistaVision, is a sight to behold. With Grace Kelly, Cary Grant.

ÎHow to Be Very, Very Popular:

The King’s Thief: Sword opera. Fair. Lady and the Tramp: Cartoon. Good. Land of the Pharaohs: Spectacle and drama. Excellent.

Love Me or Leave Me: Biographical

Not as a Stranger: Drama. Fair.

Out of the Clouds: Drama. Fair. 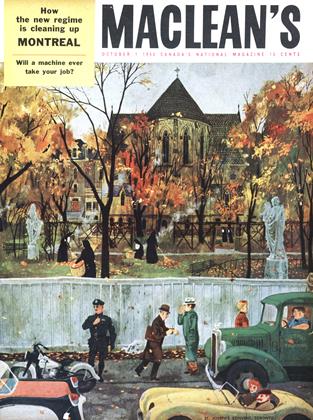