THE GREAT ADVENTURE: A wildlife film from Sweden, directed and photographed by Arne Sucksdorff in a manner that marks him as a universal poet of the modern sound camera. Without such all-toofamiliar devices as whimsical music and a punning patronizing commentary, he gives us the story of a year in the lives of a couple of farm boys and in those of the wild animals that surround them. Highly recommended for customers of all ages.

THE BIG KNIFE: Overwrought and arty though it is in its less beguiling moments, this is an interesting melodrama about a power-drunk Hollywood producer (Rod Steiger) and a rebellious film star (Jack Palance) whose destiny he wants to control completely.

THE LEFT HAND OF GOD: A hard-boiled adventurer (Humphrey Bogart) masquerades as a priest while trying to escape the clutches of a despotic Chinese warlord (Lee J. Cobb), and slowly a nearmiracle occurs in his own soul. Rating: fair.

PASSAGE HOME: Some excellent acting and a rousing storm at sea fitfully enliven this sluggish British drama. The plot is the one about a lone woman and thirty sailors afloat in tropical waters.

SEVEN CITIES OF GOLD: Except for one unfathomable ‘‘mystic’’ incident which never is explained, this is a good widescreen outdoor drama—with strongly religious overtones—about the founding of the first mission in early California. With Michael Rennie, Anthony Quinn.

THE VIRGIN QUEEN: Bette Davis (under a red fright-wig) portrays Elizabeth the First, with Richard Todd as the dashing Sir Walter Raleigh, in a corny but enjoyable story of Tudor England.

Above Us The Waves: Submarine war. Drama. Good.

Female on the Beach: Drama. Fair. Footsteps in the Fog: Drama. Poor.

Lady and the Tramp: Cartoon. Good. Love Is a Many-Splendored Thing:

Night of the Hunter: Drama. Fair.

Not as a Stranger: Drama. Fair.

Out of the Clouds: Drama. Fair.

The Ship That Died of Shame: Sea fantasy-adventure. Fair. 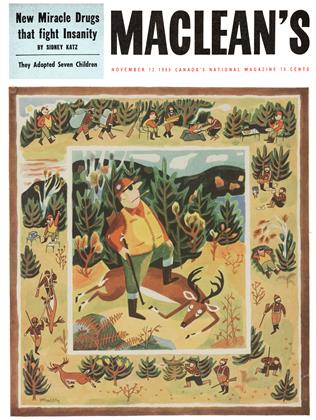