HEALTH the dead insurance duck it seemed is not to quite he at the federal-provincial conference last month. Nothing can be done at the moment except missionary work, but a very little more missionary work may be enough to tip the scale and bring health insurance to Canada.

Since Ontario’s Premier Leslie Frost has already demanded a healthinsurance plan, the “substantial majority” of the Canadian people is already assured. Saskatchewan and British Columbia have their own insurance plans in operation, Alberta has something very like it, and they with Ontario include more than half of all Canadians. All that remains, therefore, is to convert two more provincial governments to get the “substantial majority”.

Manitoba and Newfoundland look like the best bets. Manitoba is already embarrassed by the political competition of its prairie neighbors— the CCF provides “free” hospital service, Social Credit has its “dollara-day” plan, and the Manitoba Liberals are wondering how long they can go on with nothing to match these exploits.

As for Newfoundland, an Ottawa official remarked that “Joey Smallwood never put the brakes on any car he ever drove.”

In both cases, and indeed in the other Atlantic provinces too, the obstacle is money. Ottawa has never

offered more than sixty percent of the cost, and that was part of a package deal which the provinces never accepted. The present outlook is more like a fifty-fifty split, and provincial governments blanch at the thought of paying for health insurance, even at half price.

“Paul Martin (federal Minister of Health and Welfare) has more control of my budget than I have myself,” said one provincial treasurer over a morning coffee. “The day he announces health insurance, I’ll have to announce an eight - percent sales tax.”

But the missionaries of health insurance hope to convince these timorous treasurers that health insurance needn’t be as costly as they think. Talk about “a billion a year” for medical services has scared a lot of people needlessly. It is true that Canada spends nearly a billion a year for all medical services, and would spend more if all were tax-prepaid, but no one suggests that a good health-insurance scheme would have to cover all costs and all risks.

Hospital expenses are the biggest risk for the average person. Best proof that hospital insurance is not unbearably expensive is the fact that Saskatchewan, a “have-not” province which was nearly bankrupt in the Thirties, has had it for more than ten years and made a great success of it. No political party in Saskatchewan would dare suggest abolishing the hospital plan.

Saskatchewan is a lot richer than Newfoundland but no richer than Manitoba, and Saskatchewan has carried hospital insurance with no federal help at all. With Ottawa putting up half the money, it shouldn’t be too difficult for others. ★ 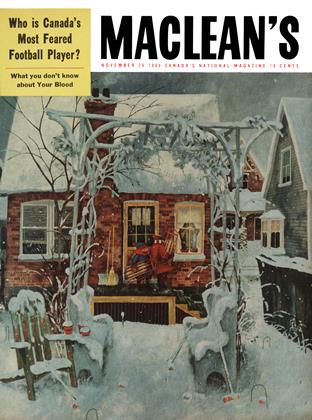