servative Association, thinks he ran across a new political issue in the recent by-election campaign in Toronto-Spadina.

Spadina had been Liberal by big majorities since it was created in 1933; its capture by a Conservative on October 24 was the biggest upset in federal politics since the war. Spadina is one of the two ridings regarded as Jewish fthe other is Montreal-Cartier) but in fact the Jewish vote is a twenty-percent minority in Spadina now. Tn the main, Jews moving out have been replaced by New Canadians moving in. It was among this group of recent European origin that George Hees heard a new complaint against the Liberal government.

“Time after time we’d find them furious at the Immigration Department for keeping people out,” says Hees. “You’d hear a man say: ‘I’ve been trying to get my brother into Canada. They won’t tell him yes or no, but there’s a guy on my street hasn’t been here half as long as I have, and he got his brother out long ago.’ ”

Senator David Croll, who was Liberal MP for Spadina, says this complaint had little or no effect on the actual vote. Croll knows the

polls where recent immigrants live, and he says they stayed solidly Liberal. He thinks the people who complained to Hees must be such recent newcomers that they wouldn’t yet have a vote at all.

But if they don’t vote now they

soon will. The political angle introduces a new twist into what was already an old argument between Immigration Department officials and the RCMP. The argument turns upon the security screening which prospective immigrants to Canada must go through before they leave Europe.

Security screening is conducted by the RCMP. Just as the Health and Welfare Department lends Immigration some fifty doctors to see whether applicants for visas to Canada are medically fit, so forty-three RCMP men in plain clothes advise Immigration whether each would-be immigrant is politically fit.

In the view of men whose job it is to keep the flow of immigrants moving at an orderly pace, this screening system takes too long, works too rigidly according to the book, and bars too many people. As a rule it takes six weeks to three months to get a visa to Canada, but delays of four and five months are not uncommon. Desirable immigrants sometimes miss the last ship they can take in the current year farm workers, for example, are not brought in much later than midsummer lest they be unemployed through their first Canadian winter, so a man who misses a ship in July is stuck until the next spring.

Many if not most of these delays are caused by security screening. In the first half of this year 8,112 immigrants came to Canada from Germany; at the end of August 5,399 cases involving about 9,000 persons,

more than the total for the first six months, were undergoing security examination in Germany.

Of course Canadian policemen have no facilities of their own for getting information in foreign countries. They depend entirely on what they get from local police agencies, and in Germany

these are peculiarly numerous. Enquiries about each prospective immigrant are sent out to about seven different agencies—U. S. intelligence, British intelligence and a variety of federal and stete German police forces —and the immigrant’s file is then at a standstill until answers have come in from all of them.

subversive organizations in Canada, and they know how much can be done by even a small number of Communists if they work as a team—for example, in operating a Communist section of the foreign-language press in Canada. The Mounties will not, and earnestly believe they should not, pass any individual until they have taken full advantage of every source of information they can find.

Immigration officials have no quarrel with this in principle, but in practice they think it’s absurd. The trouble is that the same degree of care is not and

cannot be applied in all countries. In France, in The Netherlands, in Italy there is only one police force with which the Mounties can check, and in these countries there is no large backlog of security cases. France and The Netherlands were allies, of course, but Italy wasn’t--Italy was a Fascist enemy country, has a large and powerful Communist Party, and is incidentally the homeland of Lucky Luciano and the late AÍ Capone. Canada has only two RCMP security officers in Italy; in August the cases they had on hand included 2,750 persons, and 12,026 people had come here from Italy in the first half of 1955. In Germany there were seven times as many Mounties, counting the headquarters staff at Karlsruhe; they passed only 8,112 immigrants and had a security backlog of 9,000.

To the immigration men, this proves the RCMP is going to vast trouble and expense to stop up one hole in a sieve.

Actually these comparisons arc not quite fair because Germany does prestmt special problems. Germany is not only an ex-enemy but a divided country, half of which is controlled by a present enemy. Many applicants for entry into Canada are refugees from East Germany, whose recent record cannot be checked at all. Even at best, security clearance would probably take longer in Germany than in other countries. But it would obviously not take so long if the Mounties were content with one or two sources of information instead of exhausting all seven in every case.

Immigration people also complain that the Mounties’ rules for exclusion are too rigidly applied. Theoretically, of course, the Mounties do not exclude anybody—they merely advise the Immigration Department, which takes the responsibility. In practice, no immigration officer actually on the spot can overrule or ignore an RCMP recommendation. To have a man admitted whom the RCMP have not recommended, someone has to be able to carry the case up to cabinet level.

A few weeks ago, for instance, RCMP security officers refused to pass a highly skilled German worker who was urgently wanted for a particular job in a Canadian plant. The Canadian employer happened to be a friend of C. D. Howe, minister of defense production, and Howe took up the case with Immigration.

It turned out that the German applicant had been a member of the Nazi Party before Hitler came to power in 1933. This stamps a man as a "voluntary” Nazi, and normally is enough to keep him out. In this case, though, there was nothing else against the man—he had served through the war in the ordinary German Army, not the SS, and when he became a voluntary Nazi he was only nineteen years old. The report was sent back to the RCMP with an enquiry whether this really was all they had against him, and if it is he will probably get his visa. But not many immigrants have friends who are friends of C. D. Howe.

Immigration’s side of the argument got a boost a few months ago when a senior official of the Treasury Board, whose job it is to check on government expenditures, made a routine inspection tour of Canadian missions abroad. He took careful note of security procedure at Canadian immigration offices, and he was not impressed. As a result of his observations the Civil Service Commission has sent overseas one of its experts on organization and methods, to see whether administrative routines can be accelerated and the backlog cut down that way.

Nobody really expects, though, that a mere reform of office routine will

make much difference. The root of the difficulty is a policy question—whether the security of Canada really requires this exhaustive canvass of every source of information, or whether a partial check should he deemed sufficient in the interest of speed, convenience and compassion. This can only be settled between the minister of justice, Stuart Garson, and his old friend and fellow Manitoban Jack Pickersgill, minister of citizenship and immigration.

TWO ISSUES AGO this column had an item about the by-election in Temiscouata, Quebec, which was won for the Liberals by Jean-Paul St. Laurent, younger son of the prime minister. It quoted Conservatives as saying "the most effective of all Liberal tactics were the large parties—teas, cocktail parties, picnics -at which the prime minister himself would drop in unobtrusively and go about chatting and shaking hands.”

Jean-Paul St. Laurent would like it known that he himself did not use these tactics at all. He was careful, he says,

to run his own campaign in Temiscouata with no intervention by his father; he wanted to win the seat on his own, not merely as the prime minister’s son, and he is convinced that he did just that. As for parties, "we had one tea party, no cocktail parties and no picnics.”

On re-enquiry, Temiscouata Conservatives still insist that a big factor in the Liberal victory was the prime minister’s appearance at social gatherings which he doesn’t ordinarily attend. The St. Laurent summer home at St. Patrice is in Temiscouata County, but normally the PM leads a rather secluded life there. Last summer he accepted invitations from local politicos, and the local Conservatives made resentful note of names, dates and places. They say lie had a terrific impact, especially in old Conservative circles which had supported the Liberal maverick, Jean-François Pouliot, but could not be relied upon to support a new Liberal MP. They complained at the time to their own party headquarters that this intervention violated the spirit of the tradition against major party leaders taking part in by-election campaigns.

However, Conservatives admit that the parties they have in mind took place before Jean-Paul St. Laurent won the Liberal nomination. Guest of honor was the new senator, Jean-François Pouliot, who had been Temiscouata’s MP for nearly thirty years; Jean-Paui St. Laurent wasn’t even invited. ★ 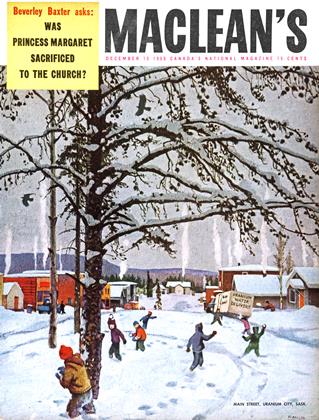