GUYS AND DOLLS: Producer Sam Goldwyn, scripter-director Joseph L. Mankiewicz and a lively cast have come up with a handsome and funny wide-screen version of the famous Broadway hit. It’s over-long at two and a half hours but liberally loaded with laughter and sentiment in the appropriate Damon Runyon tradition. With Marlon Brando, Jean Simmons, Frank Sinatra, Vivian Blaine.

BIG FAMILY: One of Russia's better celluloid exports. It tells of a prolific clan of shipbuilders and their overlapping problems, professional and personal alike.

MY SISTER EILEEN: Two Ohio girls invading Manhattan (Betty Garrett, Janet Leigh) are the central Figures in this fair remake of a 1942 musical, but the real star is Jack Lemmon as a high-minded wolf.

QUEEN BEE: A vintage item for the Joan Crawford Fan Club, but a bit of an ordeal for non-members like me. She appears as the self-adoring psychotic empress of a wealthy tribe of moderns.

THE ROAD TO DENVER: The story (good brother versus bad brother) is fairly weather-beaten but there are a number of redeeming fresh touches in this unpretentious western. With John Payne, Skip Homeier.

THE VIEW FROM POMPEY’S HEAD: Such deficiencies as a rambling and gabby script and a somewhat synthetic ending fail to dislodge this elegant high-society drama from the category of better-thanaverage films. Adapted from Hamilton Basso’s novel, it gradually discloses a long-hidden tragedy among the aristocracy of a proud Southern town. Richard Egan, Dana Wynter, Cameron Mitchell, Sidney Blackmer and Marjorie Rambeau are in the skillful cast.

5 Against the House: Drama. Fair. 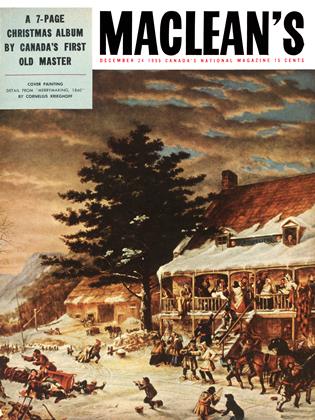