BEST BET THERE’S NO BUSINESS LIKE SHOW BUSINESS: The story (two warmhearted troupers and their stagestruck children wind up in merry unison after various family crises) is almost as old as the California hills. But Irving Berlin’s fine songs and a passel of flavorsome performances (Ethel Merman, Dan Dailey, Mitzi Gaynor,

THE BEACHCOMBER: Robert Newton, in a screen role originated by Charles Laughton in 1938, is hammy but often quite funny in a farfetched farce about a drunken bounder and a prim spinster (Glynis Johns) on a tropical island.

THE BELLES OF ST. TRINIAN’S: Ronald Searle’s cartoons about a deplorable school for girls inspired this wacky English comedy — repetitive in style but highly enjoyable nonetheless.

The stately headmistress and her bookie brother are both played by Alastair Sim.

CREST OF THE WAVE: The suspense is too artificially prolonged as a dogged American (Gene Kelly) helps British naval scientists in testing a super-power torpedo.

HANSEL AND GRETEL: A charming puppet fantasy for children, based on the Humperdinck opera. Canada’s Anna Russell supplies, with gusto, the voice of the witch in the gingerbread house.

SO THIS IS PARIS: Everybody is ferociously “gay” in a Tony Curtis musical about three sailors who invade naughty Paree. A couple of the big numbers are fairly lively.

THREE RING CIRCUS: My own non-enthusiasm over the antics of Dean Martin and Jerry Lewis is as pallid as ever after sitting through this Big Top charade, but the boys' diehard admirers seem to find it chucklesome.

TROUBLE IN THE GLEN: A sickly-sweet little girl with a mincing voice is among the several drawbacks to be noted in this British comedy-drama about a stubborn laird (Orson Welles) and his defiant neighbors in a Scottish village.

YOUNG AT HEART: A remake of Four Daughters (1943), with Frank Sinatra in the old John Garfield role as a self-pitying musician. Sinatra and Doris Day sing appetizingly, but the story is sometimes hard to swallow. 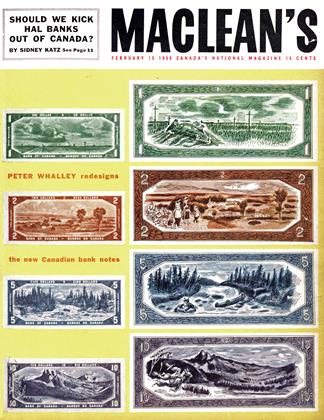