ANY HISTORY book will tell you parliament’s annual wrestle with the estimates, the fat blue book that itemizes the Crown’s expenditure for the coming year, is the most important of its tasks. Control of the public purse is the-very cornerstone of constitutional government, the basic right for which the Long Parliament chopped off King Charles’ head.

In practice, though, the scrutiny of parliament is the merest once-over compared to what the estimates get before parliament ever sees them. The real watchdog, the one that doesn’t bark but does bite, is a six-man committee of cabinet called the Treasury Board.

The Treasury Board always has the Minister of Finance as chairman, it always has the Minister of National Revenue as a member, and it has a staff of about forty professional hardhearts whose skill is saying “No.” Even in the days of fat surpluses, even with easy-going Doug Abbott in the chair, the Treasury Board was a formidable inquisitor that the average bureaucrat regarded with resentful apprehension.

This year the Treasury Board has two new brooms—a new chairman in Walter Harris, a new secretary in John Deutsch, Assistant Deputy Minister of Finance who used to chart economic policy before he was assigned to chart economies. Harris is a country lawyer who came up the hard way, Deutsch a frugal farmer’s son from Saskatchewan. Both have long felt that government spending could be tightened up.

They happen to have taken charge just as the economic climate changed in Ottawa, and the big surpluses of Abbott’s time gave way to the first

postwar deficit. The result has been the toughest screening of expenditures since R. B. Bennett ¡.put the civil service through the ^ringer nearly twenty-five years ago.

Not that the tough screemjg had much to do with the $153-Wllion reduction from last year m this year’s estimates. Of that, $149 millions came out of the defense budget, and defense is the one department that the Treasury Boar^ hasn’t really tackled yet. There may not even be any cut in actual spending on defense—-the amount voted for the current fiscal year was $1,908 millions but the amount spent of that appropriation will be only $1,705 millions when the fiscal year ends on the thirty-first of this month. That’s seventy millions less than the “reduced” defense budget for 1955-56.

The Treasury Board’s achievement was to cut the civilian departments down by a net four and a half mil-, lions, a sum that may seem a drop in the bucket but was squeezed out like blood from a stone. This is the kind of economy that affects jobs—in other words, the kind that hurts.

TO HEAR SOME of the laments around here these days, you’d think the sidewalks of Ottawa would soon be cluttered with former civil servants selling shoelaces. You would also think that efficiency and the public interest had been sacrificed to a miserly thrift, and that the work of years was being cast away to save a few measly pennies.

It is a bit of a shock, therefore, to find that the government’s payroll of full-time year-round civil servants, which went up by 9,000 since 1953 to its present figure of 140,000, is now authorized Continued on page 75

This doesn’t mean that the savings are all phony and the laments all lies. Personnel requirements are still going up because the five-day week is spreading through the civil service, district by district and department by department. Civil-service salaries have been increased, none too soon to keep them anywhere near in line with other salaries. A few “developmental” departments such as Northern Affairs are still, even in these times of economy, being allowed to expand. Allowing for these more or less uncontrollable increases in manpower and wage costs, you find in the estimates a real tightening and squeezing of staffs in all departments. But even these don’t have to result in actually throwing people out of work.

An example of what happens when a department is told to economize is the International Service of the CBC, which had to cut $657,000 from the $2.4 millions it got for the current year.

On paper, the carnage is frightful. From a total establishment of just over two hundred, no fewer than fifty jobs have had to be lopped. One European division, the Finnish, has been abolished. Scandinavian, Dutch and Italian services have been cut to half or less, and the French and English services reduced. Jobs in the newsroom have disappeared as four daily newscasts in English have shrunk to one. Total reduction in salaries is $206,000, not counting a drop of $130,000 in fees to performers.

Yet, strangely enough, less than a dozen people will be left without employment when the March 31 deadline arrives—perhaps none at all. At this writing there are still optimists who hope to find a job either inside or outside the CBC for every displaced man and woman.

The search for jobs began last fall when it became known that the 1955-56 estimates would be sharply cut. Normal staff turnover took care of some, and of course there were no replacements from outside. Transfers from one division to another were made whereever possible; the vacated jobs ceased to exist. All those in jeopardy were warned to look out for other employment, and the corporation itself kept an eye open too.

This has been the pattern in all departments where cuts have occurred. Normal turnover in the civil service runs around fifteen percent a year. Even the Treasury Board didn’t propose that replacements should be cut off altogether—Ottawa learned long ago the drawbacks of hiring by fits and starts—but it did insist that more transfers should be made within the service. This can be very annoying to department heads who know whom they want, and who must take instead the leavings of some other department,

but it’s hard to provt jt will seriously affect the efficiency o.f the Canadian government service.

SOME OLD HANDS around Ottawa, far from feeling alarmed lest the cuts have gone too far, are cynical enough to doubt that the new economy trend will ever go far enough to make much difference. The trouble is, they say, that there is simply no incentive to economy in the government service.

That may sound like a harsh criticism of bureaucrats, but it is not. Any man worth his salt thinks his work

is worth doing; he’d like to expand it, and he can easily convince you that it should be expanded in the public interest. Finance officials are notorious tightwads, since they’re the ones who have to find the money, but it was a senior Finance official who remarked the other day that “the government could usefully spend five hundred millions more than it’s spending now each year, doing things the people would like to have done.”

It’s a matter of judgment how much of this “useful” service Canada can afford. Naturally the men who are

doing each job are biased in its favor.

But even when the job’s usefulness has declined to the vanishing point there is still a strong human temptation to let it go on. Cutting it out means disturbing people, perhaps even dismissing people and leaving them jobless. No humane man likes to do that if he can avoid it, and it, the civil service he usually can avoid it.

A textbook example of this reluctance to be too harsh with obsolete staff is the Physical Fitness Branch of the Health and Welfare Department, a branch that will cease to exist on March 31.

Health and Welfare didn’t want Physical Fitness in the first place—the unit was dumped on the department in its infancy. Last year the department itself, not the Treasury Board, decided the time had come to repeal the Physical Fitness Act and discontinue the principal functions of the branch. This repeal cut off a set of grants to provinces, and saved the federal treasury $150,000.

But having gone that far, the department couldn’t be quite hard-hearted enough to abolish the whole branch at one blow. Its staff was still plugging away at work that had always been accepted as useful. The department worked out a scheme whereby the staff of eleven would be reduced to eight (three had left anyway) and its budget cut from $75,000 to $50,000. In another year this would go down to $25,000, and in the third year disappear altogether.

At this point the Treasury Board intervened to say “No dice.” Since parliament had repealed the Physical Fitness Act, paidiament presumably •wanted the functions discontinued now. The new $50,000 budget was rejected and the branch abolished.

However this didn’t create any actual unemployment. The decision was made last fall, and this gave the department time to look around. By March 31, except for those who have left for other jobs or for matrimony or retirement, every Physical Fitness staffer will be working somewhere else in the Department of Health and Welfare.

If this happened to a branch that nobody wanted, you can imagine how hard it is to dislodge a service that the deputy minister thinks essential to the public welfare. Most of them think that of all the services, however lowly, that they have in their charge.

On top of the pressure of humane sympathy is the pressure of politics. Jobs are held by voters, and even the six ministers on the Treasury Board itself are all politicians.

“They’re Jekylls and Hydes,” said a veteran bureaucrat gloomily. “I’ve often had a minister call me to ask, for his own department or his own riding, a favor which he himself had refused to another department the day before.”

In the light of all this you can realize what an achievement it was to cut $4.5 millions out of the civilian estimates. You can also realize why the cynics don’t expect the trend will last. ★ 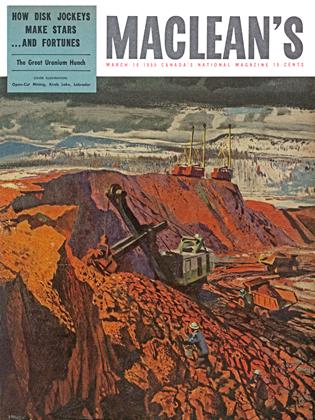