WE DON’T KNOW who we feel more sympathy for—the American temperance organizer who was reported by the Winnipeg Free Press to be in town “taking port in a two-day program of alcohol education” . . . or the New Brunswick motorist who noticed with disgust, as he drove along, that he was wearing only one of his low-style spat rubbers, the other obviously having fallen off during his last stop. He was so fed up he threw the other one out the car window, then found the original rubber under the car seat when he got home.

And we don’t know who we feel more admiration for—the Saskatchewan sheep raiser who rigged a scarecrow to scare off coyotes, mounted it on a light two-wheel cart and harnessed it to his ram so it would follow the flock ... or the demure little old lady in New Glasgow, N.S., who paused in the doorway of the church to fish in her purse for her communion card to hand to the elder. As she handed it over she discovered it was a forgotten ticket for a horse race in a neighboring town, but she didn’t quiver an eyelash as she marched on down to her pew.

The only dress that would satisfy the Toronto girl shopping for a semi-formal was the one on the mannequin in the window, so the proprietor of the shop naturally got it for her and she went away happy. He didn’t bother to put another dress on the mannequin for a while until he noticed that his window was provoking a lot of laughter from passersby, and it wasn't till then he realized the utterly nude model supported a card at its feet reading "Festive but not formal."

This woman in Nelson, B.C., had heard about the rivalry between two other interior towns, Penticton at the bottom of Lake Okanagan and Kelowna, halfway up the lake. She had no idea just how far things had gone, though, until she visited Penticton and dropped into a hardware store to try and buy her son a pocket compass. Didn’t have one in the place, the clerk said, but her look of disappointment only brought a shrug. “What would we want with a gadget that does nothing but point to Kelowna?” he demanded.

We’ve heard of patients paying off the doctor with roasting fowl and sacks of potatoes, and we’d heard that prairie farmers aren’t too happy about prices these days. We never would have believed things had come to such a pass, though, if we hadn’t seen with our own eyes an Alberta woman’s receipt from the Medicine Hat General Hospital after she’d settled a bill for $246 . . . “Received the sum of two husband and forty-six dollars . .."

After all these years it’s refreshing to hear a new twist on the sad but too often true story of the groom who loses the ring at the last moment. This Montreal chap forestalled trouble by arranging with his jeweler to borrow a duplicate ring to carry just in case something went wrong. Nothing did, though—till the new bridegroom showed up at the jeweler’s a few days later to return the spare, put his hand in his pocket and . . .

Morning after a heavy snowfall one Toronto motorist couldn’t quite make his car rock its way out of the drive. Striding down the street just then came a six-foot-two-hundred-pounder, brief case in hand and subway bound. The motorist hailed the citizen and asked if he’d mind having a bit of a heave at his car, which was one of those lightweight English models. “I couldn’t think of it,” was the blunt reply, but at the motorist’s taken-aback look the big man explained.

“Look back there,” he said, waving towards a feminine figure shoveling snow a few doors along the street. “That’s my little wife and she loves me. Hasn’t let me touch a shovel since she read one of those magazine articles warning that big lugs like me are always dropping dead at forty-three from overexertion. Now if you think I’m going to let her see me pushing your car out of a snowbank and shatter such a tender dream you’re crazy.” ★ 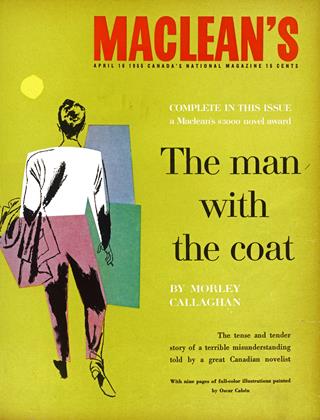