atmospheric scenes of Shakespearean productions of a century ago are enough to earn a solid recommendation for this massive CinemaScope item, although it kicks history around quite a bit. Richard Burton strongly impersonates the renowned actor Edwin Booth, with Raymond Massey in fine eye-rolling form as his halfmad father. Slender, pretty-boy John Derek is less successful as Lincoln’s assassin, John Wilkes Booth.

THE ATOMIC KID: Mickey Rooney earns some chuckles but finally loses out to a weak script in a farce about a survivor of an A-bomb blast.

DESTRY: A routinely competent remake of a western comedy-drama about a peace-loving deppity sheriff and the saloon queen who yearns for him. Audie Murphy and Mari Blanchard are in the roles played better in 1939 by James Stewart and Marlene Dietrich.

THE FAR COUNTRY: The real McCoy, historical and geographical, might have been a lot more interesting than the glib distortions which abound in this fatuous gold-rush western. With James Stewart, John Mclntire, Walter Brennan, Ruth Roman.

THE LONG GRAY LINE: Famed director John Ford’s tribute to the United States Military Academy at West Point. It’s a leisurely, sentimental biography of an Irish immigrant (warmly played by Tyrone Power) who was father-confessor to future generals for fifty years. Not much action, but plenty of chuckles and tears.

SITTING BULL: Corn is still corn, no matter how wide you slice it, and there’s a load of it in this CinemaScope western. Actor J. Carrol Naish, with faint N’Yawk accent, plays Sitting Bull.

The Sea Shall Not Have Them: British war-at-sea drama. Fair.

So This Is Paris: Musical. Fair. 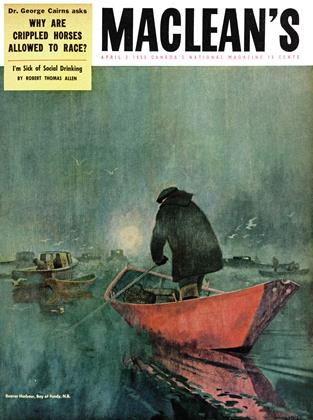