Among the Saints and Sinners Beverley Baxter May 28 1955

THERE IS a club in London called the Saints and Sinners. It was started by a few newspapermen, music-hall comedians and bookmakers. The idea was to hold lunches at irregular intervals and, at Christmas, raise funds for charity.

The lunches were held in a sort of smugglers’ room of the Albany Club which is much frequented by gentlemen who make books at race meetings and shout the odds to the innocents. There were invited speakers at the luncheons but heaven help them if they were pompous and dull. No one was safe with that crowd.

Unhappily the club prospered and it became rather a smart thing to attend the monthly luncheon when guests were permitted and oratory flowered from the head table. Cabinet ministers, famous barristers and peers turned up as guests. Even Douglas Fairbanks, who is a knight but cannot call himself “Sir” unless he renounces his American citizenship, lent his social glory to the club from time to time. For some reason the club elected me a member-—but we shall let that pass.

Then, through some rearrangement, the Albany Club could no longer house us. I forget the reason but it is of no matter. So we moved to the Dorchester in Park Lane, but in the transition lost something of our character. The comedians and the turf accountants seemed to fade away and, instead, the Saints and Sinners became a gathering of important men plus a certain number who looked more important than they were.

Each year we have an annual dinner to which guests are invited. This year the chairman of the club was Arthur Christiansen, editor of the Daily Express, and so many were the guests that we took the big banqueting room of the Dorchester.

Understandably the comedians were not there because they were performing at the theatres. As a matter of fact there were peers, baronets, civil servants, editors, novelists and politicians. It could hardly have been more respectable if we had invited the House of Lords en masse.

In response to the card of invitation all of us wore dinner jackets— all but one. The solitary exception was the Rt. Hon. Aneurin Bevan. This night he was in a lounge suit, even as when he was a cabinet minister he wore a similar costume when dining at Buckingham Palace.

He is quite logical about it. “You wear your livery as a Tory,” he once said to me, “and I wear my livery as a socialist.”

My job at the dinner was to propose the health of the guests but I must confess to being somewhat pleased that Bevan was not on the list of the speakers.

As luck would have it the first speech of the night was by the Rt. Hon. Sir Hartley Shawcross, QC, Attorney-General in the Lahor

Government from 1945 to 1951, and probably the highest-paid barrister in Britain.

It is necessary to my tale that I should tell you a little about Sir Hartley. As a boy at a public school (and in England the public school means the private school) he became a socialist. He was destined for the Bar and after he had passed his law exams he joined Sir David Maxwell Fyfe (now Lord Kilmuir and the present Tory Lord Chancellor) in Liverpool.

Maxwell Fyfe had married an adorable creature named Sylvia Harrison who had a somewhat feckless, attractive brother named Rex who was determined to go on the stage. Today, of course, he is a great star.

I have a suspicion that Sylvia was not very enthusiastic about the debonair young Hartley Shawcross who had joined her husband.

could deny that Shawcross was goodlooking (he still is) nor could they deny that he had a voice like a cello.

But why was he a socialist? His parents had been sufficiently well endowed with the world’s goods to send him to a public school. No douht David Maxwell Fyfe said to his wife: “My dear, you cannot run British politics on one party.” But Sylvia probably had an answer to that.

Now let us leap several years in one jump. It is 1945 and the postwar general election has swept us Tories out of office and installed the Labor Government with a clear majority. And what a majority! We Tories who survived the holocaust were little more than a decimated platoon.

Mr. Attlee formed his government and, when the list was complete, we discovered that Mr. Hartley Shawcross, KC, who had never previously been an MB, was Attorney-General, complete with the knighthood that automatically accompanies the post of attorney-general.

In no time Shawcross had made a deep impression upon the House. His voice had a sort of soothing authority, his manner was one of languid elegance, and he had a first-rate brain. But we did not warm to him for he seemed detached from the normal MB. He had the aloofness of a man who walks alone, but we respected him for the quality of his mind.

General election 1950! The socialists won, but with only a tiny majority. Shawcross is once more AttorneyGeneral but in a short time is made Bresident of the Board of Trade. He takes the transition perfectly. Obviously a man of outstanding gifts and personality.

General election 1951 ! Labor was out and we were in but by a perilously small majority.

It was almost impossible for any of us Tories to carry on any of our normal outside occupations. 1 resigned as dramatic critic of the London Evening Standard for the simple reason that I could not get out of the House of Commons to attend the first nights at the theatre. Most of us were in that kind of predicament.

And what did Master Shawcross do? He calmly returned to private practice at the Bar and proceeded to earn an income of anything from twenty thousand to thirty thousand pounds a year. For weeks at a time we never see him in the House although he is still an MB. He takes practically no part in the life of parliament.

Forgive me for the length of time 1 have spent on this portrait but it is an essential background to what happened at the Saints and Sinners dinner.

Shawcross was the first speaker when the food and wine had ministered to our physical comfort. His voice was more like a cello than ever hut the music that came from it was not particularly sweet. With icy contempt he attacked Nye Bevan by inference and by direct accusation. He implied that the Bevanites were an irresponsible menace not only to parliament but to the country.

The rest of us who had to make speeches felt that we were merely filling in. Shawcross had deliberately chosen to decry and ridicule one of his own party in the presence of a host of Tories.

When our speeches had come to their inconsequential end the chairman of the dinner did the only possible thing. He said that we had among our guests a lion accustomed to roar and that, with the permission of the gathering, he would invite the lion to do his stuff.

With much dignity Bevan thanked us for our hospitality. Then, summoning an elaborate courtesy that would not have deceived a Scotland Yard detective, he said: “In the course of his speech Sir Hartley remarked that he would have liked to make a speech on a more political theme. I think I can help Sir Hartley.”

That was only Bevan’s beginning. Warming to his task he taunted Shawcross, insulted him, lampooned him and then dismissed him as if he were not worth even contempt. After twenty years in public life I am not easily shocked but I found the whole thing embarrassing. Certainly Shawcross had asked for it hut Bevan might have made it a duel instead of a brawl.

Will He Rule the Masses?

To my surprise, the gathering was with Bevan although he was behaving like an angry fishwife at Billingsgate. Berhaps the Tories there looked on Shawcross as a renegade who joined the socialists to gain the palm without the dust. Bersonally I believe him to be a sincere socialist and I see no reason why men from any walk of life should hesitate to join a left-wing movement if they sincerely believe in its philosophy and policy.

When the affair was over, a few of us sat down at a small table for a nightcap and a final appraisal of what was happening in the Labor Barty. One of our party, a man of fine mind and mature judgment, said: “This has always happened in left-wing movements anywhere and everywhere. The intellectual, like Shawcross, is attracted to socialism because it appeals to the sentimentalist and the idealist. There is something splendid and even uplifting in the idea of raising the common people to be equal masters with the bosses.

“Eventually the intellectuals sicken of the very thing they believed in. Remember that Sir Oswald Mosley was a rich socialist who eventually became a fascist. Whether Shawcross knows it or not, his speech sounded like that of a neo-fascist.

“Bevan is at least consistent. He advocates the rule of the masses, assuming, of course, that he will rule the masses. But before we condemn Shawcross too much for his performance tonight let us at least concede that it was a brave speech even if it was embarrassing to his audience. The story of socialism never alters. It begins with goodwill to men and ends up in some form of autocracy with anything but goodwill in its heart toward anyone.”

That ends my story of the strange dinner that took place in the heart of London’s West End. As we entered the banquet hall each of us had to choose a white or red carnation indicating whether we were saint or sinner. Bevan at least chose the flower of sin.

Yet I believe that what we saw that night was more significant than a mere brawl between two left-wing leaders. Unless I am hopelessly wrong in my deductions the Labor Party will be badly defeated in the general election which is underway as you read these lines.

If I needed any reassurance on that point, the dinner of the Saints and Sinners gave it to me that night, if 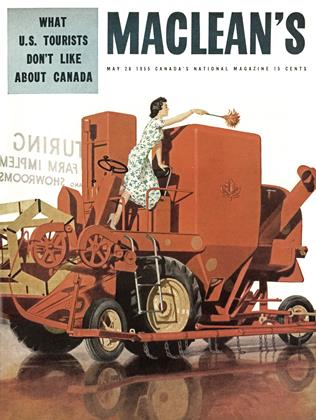