THIS special issue celebrating the fiftieth birthday of Canada’s two youngest western provinces was just going to press when we ran across one we’d never heard of before, as recorded in the Ottawa Journal’s story about a recent capital conference attended by delegates from all provinces “except Newfoundland and Prince Albert.”

Nothing has changed so much in fifty years as prices, and our sympathies in this Prairie Year go out to the editor of Calgary’s Farm and Ranch Review who recently paid $6.50 to have his shoes resoled and heeled . . . and to one of his subscribers who the same day received a money order for forty-one cents for a cowhide sold to a Calgary tanner.

They say production has increased through the years, too, though sometimes we doubt it. The Farm and Ranch, which is just as old as Alberta, recently republished this letter received from a rancher reader years ago:

I was never a believer in outrageously long hours, but I have always adhered closely to the principle of starting in good time in the morning; to have all the men who worked with me start off promptly at five o’clock. The first hour of the morning was spent in choring and the next half

hour for breakfast, so that by 6.30 we were able to begin the day’s work . . . We aimed to have our work done by 6 o’clock and seldom later than 6.30. Our help then had the evening to themselves for recreation and rest.

Unexpected adventure still lurks in the Saskatchewan north woods, as tourist bureaus like to assure their camper clientele. The fellow from Tiger Hills, Sask., had taken his Vancouver friend fishing in Angling Lake in Prince Albert National Park. They parked their car in a small grove of poplars, right beside a tree bearing a sign CUT NO TREES, and hiked on to their cabin. Next day, returning to their car, they discovered a beaver had neatly cut down the very tree, chawed off about

three feet of the butt and hauled it away, leaving the notice still intact on what was left of the fallen poplar.

Saskatchewan’s Golden Jubilee Committee has published Saskatchewan: The History of a Province,

and done a fine job of it, too, we understand. We must say we’re disappointed that the title isn’t as colorful as Saskatchewan’s history

deserves, and as it might have been had they chosen either of two other titles suggested by committee members: From Sodbusting to Socialism, and (obviously from a member of another party) Grits, Guts and Gumbo.

Several Calgary Parade scouts were so delighted by the local stationery store’s advertisement of Mother’s Day gifts — “hip flasks, cocktail shakers, poker chips” — that they clipped and rushed it to us by first mail. But their laughter will fade as they read this sad letter received from a self-described “nice elderly widow, mother and grandmother . in Edmonton:

I live alone and about once in two years I buy a bottle of brandy—you know, just in case of a bit of weakness. Recently I had such a purchase in the bottom of my shopping bag. When I boarded the bus for home a nice young boy about eighteen sat by me. We talked a bit; I liked him so much and he said I reminded him of his mother. We got off at the same stop, it was slippery and wet and I fell. Billy gallantly helped me up but my bag was dripping, and my Scottish soul outraged at the thought of seven dollars wasted. So I blurted “I’ll bet my brandy’s broken!”

The dear boy dropped my arm as though it burned him, and strode off. Left to toddle home alone I found the bottle was not broken after all, just dirty water dripping. But I'm still so humiliated and ashamed that I’ve stuck that horrid bottle, unopened, into the darkest corner of my closet, and am seriously contemplating joining Alcoholics Anonymous.

And don’t anybody go away, this semi-centennial year, saying the west has lost its rugged individualism. R was just the other day the Edmonton Journal carried a personal ad: “Middle-aged couple wish to rent secluded roof for sunbathing.” 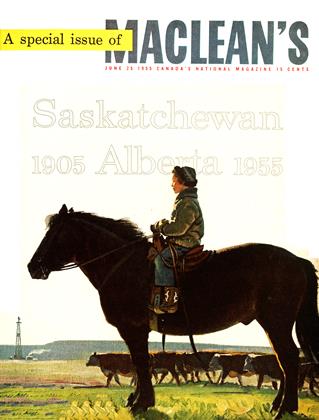