THE WORSHIP of youth has never been a British characteristic.

Over here they like ancient monuments, old inns, medieval churches and crumbling open fireplaces. Even in the theatre the pretty young starlets gaze with envy at actresses in their seventies like Sybil Thorndike and Edith Evans who are a sellout as soon as it is known they will appear.

In well-to-do families the children are packed off to boarding school at the earliest possible moment. From time to time the parents visit them and, of course, there are the holidays when the families reunite.

We have no parallel here to the American phenomenon where middle-aged parents sit on the veranda and watch with adoring eyes as the younger set live out their soda-pop romances and behave as if the present as well as the future belongs to them. In short, it is the venerable oak which the English adore and not the sapling.

All of which may be a partial reason for the development of a very unpleasant feature of present-day life in Britain. I refer to the plague of the Teddy boys.

No one seems to know how or when this curious cult began. One might think that it grew from the high spirits of undergraduates at Oxford or Cambridge but this is not so. Those great universities are guilty of many youthful divertissements but not this one.

Five minutes by car from my house in London is the salubrious neighborhood of Camden Town. It was there in a wretched boardinghouse that young Charles Dickens lived when he used to make his weekly visits to his father in the debtors’ prison. Camden Town has plenty of pubs and although it possesses little beauty as a neighborhood it adjoins the stately grandeur of Regents Park.

To reach my North London constituency I always drive through Camden Town and a few months ago, to my surprise, I became aware of a new cult which seemed centred there. It consisted of young men in pairs or trios looking rather self-conscious about their apparel.

Their trousers were pipe narrow in the legs. Their jackets were like duffel coats without hoods. Their shirts were white and their black bow ties were like string. But stranger still, their hair was coal black and pompadoured. In short, they had reverted to something like the Edwardians and looked as if they had stepped out from the pages of Punch at the turn of the century.

At first they were few in numbers and no one regarded it as anything more than a caprice of youth. Perhaps even it was an expression of our old friend the inferiority complex. Here were young fellows in their late teens trying to attract attention which their personalities would have never achieved by any other means.

Personally, I felt a slight sympathy with

them. Their jobs and their homes were drab and they possessed neither the qualities nor the personality to rise above the dull uniformity of life in crowded London. And, after all, the dress of the male in modern society is consistently unadventurous.

At any rate the cult caught on and spread to other parts of England. And still the people smiled. In fact it spread to the female of the species and we began to hear of Teddy girls as well.

Rut unfortunately the new Edward ians were not content with walking in the streets in the evening, earning the amused glances of the crowds. They began to form gangs and would meet in a body at this or that dance hall. Fights broke out, especially when they ran into young ex-servicemen who took a low view of their pompadoured juniors.

From that to raiding genuine youth clubs was an inevitable step. The police courts began to see them, alt hough the magistrates contented themselves with telling the youths to go horne and stop making fools of themselves.

Then one night in Camden Town it happened as it was bound to do. Four Teddy boys surrounded a young waitress. With about as much delicacy as a chimpanzee would show in the mating season, they began to force their attentions upon her.

Out for his evening walk was an elderly Cypriote and his wife. He was a man of fine character, with a heart that was more chivalrous than strong. He intervened and told the boys to stop molesting the girl. Whereupon one of the Teddy boys hit him on the forehead. The old man fell like a log and did not rise. The Teddy boy had a knuckle-duster on his hand—and the old man was dead.

One of the boys shouted in horror, "What in hell made you do that?” Then they ran like frightened animals.

Slowly, methodically, the police began their enquiries and in the process undoubtedly made a useful survey of the Teddy-boy population in that area. The next day the four boys, with their parents, wisely gave themselves up to the police. They have been

remanded in custody and I can carry the story no further.

I doubt that it will be considered a hanging matter even if the blow is found to be the cause of death, for the reason that the boy responsible did not premeditate nor intend to kill. He was simply playing the role of the tough Teddy boy. Nevertheless he will not see the green of the grass nor walk the streets of London for many a long year. Rut the woman whose husband he killed will live out her time a lonely creature with only memory and grief as her companions.

I wish it were possible to state that this foul affair was an isolated incident but that would not be true. Before me is a copy of this morning’s Daily Express. And one of the news items deals with a case of violence by Teddy boys in the regency town of Rath.

Rath ... of all places! It is the most sedate and decorous place in all England. Wandering about its crescents and gazing at the splendor of its houses one would not be surprised if the portly Prince Regent, himself, appeared in his coach.

Rut yesterday a Teddy boy was jailed there for six months for assault. Three other boys were placed under a curfew order—for one year they must be in their homes by 9 p.m. They were also fined varying sums up to twenty pounds which should dispose of their pocket money for a while; Two of them, sixteen and seventeen respectively, were given additional fines for having knuckle-dusters in their possession.

I commend the Bath magistrates for inflicting a punishment on them which, with the curfew order, includes ridicule with the curbing of their liberty. When these posturing young idiots become nothing more than a rather tasteless joke then their swollen vanity may begin to decline.

Inevitably the magistrates and other men in position of authority are trying to find the source of this curious manifestation of vanity-sodden youth. Mr. Basil Henriques, who sits as magistrate and chairman of the East London Juvenile Court, attributes it to the parents.

He admits that there is no one cause for a child going off the rails. Rather it is a combination of influences. On the other hand he places the primary source of the trouble with the parents. Where there is a low mentality in the parents then a boy must have remark-

able qualities to rise above the level set by his elders. The son of happy parents seldom goes wrong. Such wisdom may not have the depth of Solomon’s but there is obviously a basis of truth in it.

To me, however, there are other and more potent causes than home environment. I believe that films are the most potent influence of all.

For example, an American picture called The Wild One arrived here a few months ago. It starred that admirable actor Marlon Brando as the head of a motorcycle gang of youths who raided small towns, picking up the girls, roaring into the saloons, and making war against other motorcycle gangs. I detest censorship and thought the British censor was foolish not to let us see it. The great American experiment is always before us and we like to see it in all its manifestations.

By a curious chance, however, I saw the film in Berlin. It had been dubbed into German with such skill that it seemed that Brando was actually speaking; there was not the slightest disparity between the sound and the moving of the lips. And how did the Germans take this pictorial demonstration of life in America? They howled with laughter—jeering, derisive laughter. Perhaps it brought back memories of the Hitler youth movement. But I think not; what they were laughing at was this cruel, imbecile picture of American life.

It is true that in Hollywood films of violence the bad man usually comes to a sticky end, but is it any wonder that juvenile crime in the U. S. is growing at a terrible pace? Nor can we doubt that the films have played their part in producing the Teddy-boy movement in Britain.

1 hate the death penalty and have twice in parliament helped to lead the movement to abolish it. I assure you that it is not out of sympathy for the murderer but for society which stoops to the level of inflicting violent death in the name of the law. But since hanging is still the law 1 must confess that I shed no tears when a Teddy boy in Clapham and another in a different part of London were executed for gang murders. The only pity is that the gallows may glamorize them in the eyes of those who wear the livery of their crazy cult.

Fortunately, there is a partial remedy. The Teddy boy eventually comes under conscription and you can just see a British sergeant-major licking his lips as he sees the arrival of the youth with the black pompadour who has probably been spending a pound a week on his hair.

It is not easy to write on this subject with a detached mind, but we who constitute ourselves the judges of our juniors should search deep for the causes that have produced this curious manifestation. Undoubtedly the combination of inferiority complex and unsatisfied vanity, plus drab surroundings and limited hopes of advancement, must have a lot to do with it. Nor can we deny the false values of many crime films and the adulation of stars who would never have been heard of except for the microphone, the make-up expert and the publicity machine.

This Teddy-boy insanity will pass but not until there has been some dreadful happening which will shock not only the adults but the young people themselves into a sense of shame.

I am sorry to write such a London Letter as this but perhaps it may constitute a warning beyond these islands that even though youth be impatient of discipline and contemptuous of the wisdom of the years, it can be corrupted by its own hungry vanity and its inexperience of life. ^ 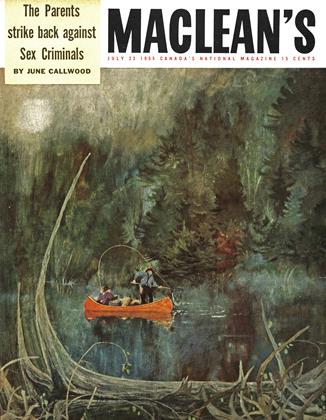