My Summer by the Sea

THERE are times when every man must face decisions that not only affect himself but the immediate members of his family. It happens to us all, and it is a wise wife who recognizes that on these occasions her husband is not only lord and master but specially endowed with vision and judgment.

The roles of husband and wife are like those of General Montgomery and Field Marshal Alexander when they planned the Battle of El Alamein. Alexander was responsible for the strategy and Montgomery (when he remembered) was in charge only of the tactics. In drawing this comparison you will realize that the husband is in charge of the overriding strategy and the wife has to work out the details. There would be happier marriages if it were more widely realized.

at the seaside. Our daughter Meribah, who was inadvertently left behind in Vancouver the previous summer, was coming home for her birthday. Her brother Clive would have leave from his job on Lord Beaverbrook’s London Evening Standard. The old man—that is, the author of this London Letter would keef) the house open in London and divide his time between the metropolis and the seaside.

We found a delightful house at Cooden Beach, a tiny residential settlement with one hotel, one golf course, one estate agent, a railway station and a few neighbors with houses that also gazed at the sea. There was a certain nostalgic appeal to me because Cooden Beach is only three miles from Bexhill where in that old-fashioned war of 1914-1918 I trained as a junior officer under Brigadier Critchley—now unhappily blinded and later in the war convalesced at Earl De La Warr’s country house in Bexhill which had been given over for the recuperation of Canadian officers. It may be of mild interest that Lord De La Warr owns Cooden Beach as well, and holds the position of Postmaster-General in the government. But, being a peer, he has no real political future and therefore we shall allow him to disappear from this London Letter.

As OC strategy I sent the family down to establish itself, and in order not to denude our London house of staff I hired a very small man as chauffeur, golf caddy and bottle washer in such spare moments as he was not taking my Sealyham Disraeli for a swim. I must confess that at the end of the holiday he looked even smaller than when I hired him.

When the family had settled in and arranged such mundane matters as establishing friendly relations with the butcher, the baker and the general storeman I went down to join them for a week end from Thursday to Tuesday. The week end was invented by the English but they are apt to stretch it a bit. By confining my stay from Thursday to Tuesday I felt that such an example of devotion to duty could not pass unobserved by the neighbors.

Up to my arrival the summer, even for an English summer, was unspeakable. England had become a sodden mass of murky swamp. Talk about the monsoon! It would be a mere drizzle compared to the English rain in the summer of 1954. My family seemed to be slightly impatient about the weather and talked to me as if they had been marooned on a tiny island, not only surrounded by water but drenched with it.

How odd of them to take that view. On the night I got there a full moon had appeared and there was not a wisp of cloud in the sky. It was sheer magic. So bright was the moon, so clear was its radiant beauty, so sparkling was the gleaming diamond reflection on the rolling

waters, so lonely was the intermittent blinking of a lighthouse that I felt a sense of absolute rapture.

The lawn of our house was like the deck of an aircraft carrier—and there beyond the shore was the ocean in all its restless grandeur. It made me think of the last scene in The Merchant of Venice when Lorenzo and Jessica are waiting for the return of Portia and Bassanio. So glorious is the Venetian moon that the two of them vie with each other in sentences of transcendent beauty beginning: “In such a night. . .” until they hear Portia coming and Lorenzo says:

I would out-night you, did nobody come.

But hark! I hear the footing of a man.

What fools they are who argue that Bacon wrote those plays! How could that brilliant but dark-souled man create such lovely nonsense?

The people in the house on our right were not only friendly hut. pleasantly excited because their bitch had just delivered herself of six tiny puppies. The maternal instinct is always an impressive thing but I have never seen a mother so bored with her offspring as this particular bitch. We went into appropriate ecstasies but I must confess that our rapture was somewhat lessened when at about six o’clock in the morning the pups began to howl for their breakfast.

Nevertheless, the place was enchanting. How invigorating before breakfast to put on a pair of shorts and splash in the sea while Disraeli chased the gulls in all directions. I felt that only a madman would spend his days and nights in such a monstrous tuberosity as that vast metropolis called London.

And it was then that I took the great decision. We would sell our house in London and have a small service flat which would do when parliament was sitting. But the rest of the time we would live by the sea. Just think of the pleasure of writing on the veranda with the rolling waves splashing against the shore, breathing in the uncontaminated air. My wife was moderately interested but rather shook me by saying: “Certainly, darling. If that’s what you want you shall have it.”

That is one of the worst aspects of the female of the species. They lack logic. They do not understand the necessity of considering every aspect of a case. I had irrevocably determined to live by the sea, but a wife should not accept the idea as if her husband had merely announced that he was going to buy a new grey hat. FI ven Montgomery must have spent some time discussing tactics with Alexander.

The week end passed and on the Tuesday I returned to London. The sun was radiant and the garden was rich in color with summer’s fulfillment. Among my letters was an invitation to the first night of the Old Vic production of Macbeth which had won such acclaim at the Edinburgh Festival.

Then the telephone rang, and it was Walter Wanger, the Hollywood producer who, you may remember, shot a man who was paying too much attention to a lady. She happened to be Wanger’s wife, Joan Bennett. 1 had known Wanger years ago when he lived in London for a time but I had not seen him since he had served his prison sentence.

So Wanger and the lovely Joan Bennett came to lunch in the garden and we discussed his prison film which was being held up by the British censor. The conversation was interesting, vivid

and important. Three times the telephone went as we lunched and instead of cursing I went to it like a lover to his mistress.

It was all very well for Shakespeare to write the lilting verbal music of “In such a night” but here was a man who had decided on murder, who had passed from power to the prison cell, who was sitting in my garden with his lovely, immutable wife whose thoughts were her own.

There was also a message from Lord Templewood, whom you will remember better as Sir Sam Hoare, saying that he was sending me the proofs of his book of political memoirs. The telephone had shaken off its dumb summer silence and the rhythm of London life was slowly reasserting itself.

Whereupon I took a firm decision. I' would not take a house at the sea except for August and September. On the contrary, 1 would keep my town house and live in it except for a winter and a summer holiday. What in blazes is to be gained by gazing at the sea

I Love a Lassitude

The later I sleep in the morning,

The groggier all through the day, And I grant I’ve had many a warning That I’d find myself feeling this way But the frankly deplorable fact is I’m pleased I’m improving with practice.

which is completely unconcerned as to whether you gaze at it or not. Even King Canute couldn’t make any impression on it.

And when the day was over my mind went back to 1919 when as a Canadian subaltern I saw Lord Beaverbrook for the first time. We had corresponded but not till then had I met this vital enigmatic genius who was to alter the whole course of my life. His words at the end of our conversation came back to me, as clearly as if they were uttered only yesterday.

“Hundreds of years ago,” he said, “the hairy Britons stood wonderingly on these shores watching the wind fill the sails of the mighty Roman galleons as they set off for Imperial Rome. London is the Imperial Rome of today and you must make your career here unless, of course, you are content to watch on the shores like the hairy Britons.” Pondering on these words as I sat in my garden I remembered that it was time to set off to the Carlton Club where Murray Chipman, of Montreal, was to dine with me. So I dialed a taxi stand and the following conversation took place:

“Come to 54 Hamilton Terrace.” “To Herrington what?”

I was home again! How could one be such a fool as to think he could leave London of his own free will and spend his days and nights gazing at the disinterested sea?

What puzzles me is that my wife should allow such foolish ideas to get into her head. But that is why we husbands must realize that the gods gave us powers of logic and wisdom, and we should not be too impatient with women who boast of their intuition because they cannot balance argument with argument. if 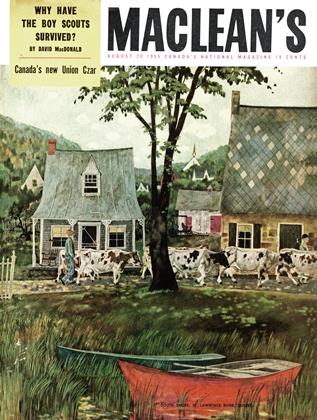