about some bored American sailors in the backwaters of the Pacific during World War II. The locker-room lustiness of the novel and the stage production has been toned down a bit, as you might expect, and one or two comic highlights are weakened by overemphasis, but on the whole this is a vastly enjoyable show. Henry Fonda, James Cagney, William Powell and Jack Lemmon are among those on board.

DAVY CROCKETT: Walt Disney's amiable biography of the renowned American frontiersman is intended chiefly for youngsters, of course, but many a grown-up is likely to get quite a kick out of it too. Fess Parker is our hero, with Buddy Ebsen as his loyal sidekick.

ESCAPE TO BURMA: Robert Ryan, wanted for murder, pitches sullen woo with teak-queen Barbara Stanwyck in a jungle plantation. A strong candidate for eventual labeling as the worst movie of 1955.

LAND OF THE PHARAOHS: Novelist William Faulkner shared in writing this better-than-average widescreen spectacle drama, with ancient Egypt as its locale. Britain’s Jack Hawkins appears as an obsessed monarch who disrupts half the world while building a tomb that will stand to the end of time.

MAGNIFICENT MATADOR: Vivid Mexican atmosphere and a slow and murky story are among the good and bad points of this CinemaScope opus. An idolized bullfighter (Anthony Quinn) and a red-haired playgirl (Maureen O'Hara) are the amorous antagonists.

THAT LADY: Olivia de Havilland and Gilbert Roland are the “names” in this extremely sluggish melodrama about court intrigues in sixteenth-century Spain, but young Paul Scofield as the greying Philip II is the performer I’ll remember. Handsome photography.

As Long as They’re Happy: Domestic farce from Britain. Fair.

End of the Affair: Drama. Fair.

A Life in the Balance: Suspense. Fair. Love Me or Leave Me: Biographicol

A Prize of Gold: Drama. Fair.

The Racers: Speed-track drama. Fair. Revenge of the Creature: Horror

The Wages of Fear: Suspense. Sordid but fascinating. 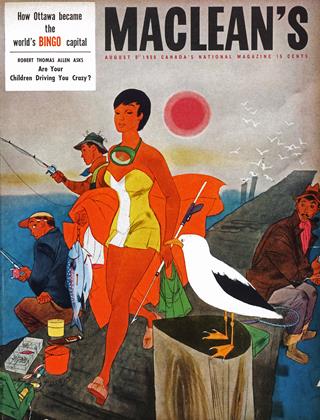