Congratulations on your editorial, Do We Need a Simpler Bible? (July 23) re the comparative value of the King James Version and the modernistic Revised Standard Version. You have seen what many present-day churchmen fail to see—that they should expound the Word rather than expect the words to expound themselves without effort by the preacher.—P. L. Pratley, Montreal.

• I quite agree with you. The beautiful and stately English of the King James Version should not be broken down to suit the language of the present day—including, I suppose, "Okay,” "You bet” and so on!—Mrs. H. M. Wheeler, Moncton, N.B.

• . . . Would you hide the beautiful message behind a cloak of outdated idioms and words that have lost their original meanings? . . . How many people would attend the theatre if all plays were still written in the language of centuries ago?—Ross Andrews, Strafford ville, Ont.

• ... I agree with every word you have written, and after ten years with United Church headquarters I cannot understand their complete endorsation of the Revised Version , . . As Dr. Hilda Neatby says, "We stand today on the shoulders of giants” and most assuredly the giants did not acquire their knowledge by easy methods. The language today has been reduced to "Hi” and "okay”—even by people who consider themselves well read. —Emily M. Shields, Toronto.

• The recent report of the American Bible Society indicates that your judgment about the King James Version is also the judgment of the whole American nation.—George Beare, Toronto.

• . . . Would you have us all speak in the same way the Bible is expressed? You might try an article in Maclean’s written that way and find the reaction.

The object of the Bible translation and revision is to enable us to reach a better understanding of the message of God and not to teach us English. —Stuart Doak, Shawinigan Falls, Que.

«... Although I do not believe the magnificent language of the King James Version needs improving I am ready to contend that some of the sermons preached today are sadly in need of great improvement.—Samuel Horrocks, Westlock, Alta.

• ... St. Paul said in First Corinthians, "I would rather speak five words with my mind, in order to instruct others, than ten thousand words in an unknown tongue.” He put clarity and understanding ahead of the euphemistic and obscure. Our

children should not need a translator to explain words and phrases long since meaningless in contemporary life.— Gordon McLaren, Prince George, B.C.

• The Revised Version has lost all the beauty of the English language. We can only hope it doesn’t become the standard Bible.—Florence L. Rathbun, Lindsay, Ont.

A Look at Atomic War

I thought Not This August was intriguing and informative. It’s interesting to have some idea of what could happen in the event of an atomic war. People who protested against this fictional effort may as well say, "We’re afraid to face the future; please, no more horror stories—they give us nightmares.” Compared to the Frankenstein movies people enjoy, Not This August was a bedtime story.—Frances Capp, Highvale, Alta.

Should We Help the Railways?

In Fred Bodsworth’s article, Are the Railways on the Ropes? (July 23) one question was conspicuous by its absence. How long must the taxpayer subsidize a corporation that gives so much free transportation and big pensions?—H. Kershaw, Nelson, B.C.

A Hero of Our Own

I feel that it is time someone protested against this current Davy Crockett craze. Surely Canada has her own

pioneers who were brave and colorful. As far as I am concerned and, I suspect, thousands of other Canadians, I never heard of this man. Can’t we find and promote a hero of our own? —T. W. Faraker, Vancouver.

When Bernhardt was the Rage

In his London Letter of July 9, Beverley Baxter stated: "As far as

London was concerned there had been no visit from the Comédie Française from 1870 until February 1939 . . .” Mr. Baxter seems unaware of the visit of the company again in 1879; they played at the Gaiety Theatre in June and July. Bernhardt and Coquelin were the stars in this visit. Henry James describes the visit as giving him "an immense lift out of British air,” and he smiles at the many members of London society who turned the visit into a social event. Bernhardt became a vogue and she was regarded as a celebrity rather than as an artist. James suggests that this adulation aided her in her decision to leave the

Comédie and to go to America.—James M. Nelson, London, Ont.

• The British have accused Americans of just about everything—now we are responsible for "The Teddy Boys” (London Letter, July 23).

The average American has a great distaste for the sickening attitude that England can do no wrong but Americans can do no right. Most Americans would love to see us get out of Europe —and England. Why try to help people who make us responsible for everything that goes wrong in their country? —Elbert Dugan, Huntsville, Ala.

Who Likes the Plumber?

In reference to your article, What’s So Dumb about the Plumber? (July 23), I feel that plumbers should still be called plumbums, as the Romans called them several thousand years ago. I am sure that any high-school student could answer the simple questions this

particular plumber had on his examinations. Plumbers must really be dumb if it takes them five years to learn so little.—George Brake, Summerland, B.C.

• In the summer no one’s glummer than the plumber ;

But when colder weather comes then he may laugh!

He takes a week to stop a leak That could be done in just about an hour and a half.—M. B. Scott, Hamilton, Ont.

Were You Pulled from the Thames?

Stanley Fillmore’s flashback, The Morgue that Sailed from Springbank (May 28), brings back long dormant memories of the stories I heard of this disaster in my boyhood.

It is also a coincidence that in April 1911, thirty years later, my chum and I while canoeing on the Thames had the good fortune to save three young men whose canoe overturned at the same spot where the Victoria disaster occurred. We never learned the names of the three fellows we rescued; perhaps one or more of them have survived the years and may read this and make themselves known. It would satisfy a long-standing curiosity.—A. H. Francis, 42 Prospect Ave., Port Arthur, if 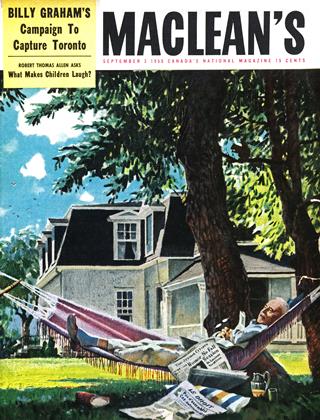