PICKS THE BEST AND WORST

Click to View Article Pages
PICKS THE BEST AND WORST

PICKS THE BEST AND WORST

HOLLYWOOD IS STILL spending far too much time and money tinkering with big-screen gadgetry as it enters 1956. No end is yet in sight for the technological upheaval that began in 1952 with 3-D and gained impetus with CinemaScope in 1953. Like book publishers worrying more about type sizes and dust jackets than about the words printed between the covers, some of the studio chiefs still appear to be under the impression that a story not worth filming at all by oldfashioned methods will somehow glow with magic on a wide wrap-around screen. Other and worthier stories are often being weakened, rather

THESE WERE THE 10 BEST

than strengthened, by big-budget elephantiasis of the imagination.

In spite of all this, there is plenty of reason for robust and clear-eyed optimism about the future of the motion-picture industry. In Canada neighborhood and subsequent-run movie houses have lost—only temporarily, they hope—a lot of regular customers to television, but outstandingly good double bills are still flourishing at the box office. Downtown, the larger first-run theatres usually fare poorly with third-rate attractions but have been packing ’em in with superior productions, sometimes for extended runs of a month or longer.

Best of all, 1955 brought Marty—a low-budget, ordinary-screen, black-and-white movie about two non-glamorous city dwellers (Ernest Borgnine, Betsy Blair) who fall in love at a dance hall and discover in each other the understanding and tenderness normally reserved for gorgeous girls and handsome heroes in screen romances. The ¡emergence of this humane and perceptive film and its vast public acceptance during a year of continuing wide-screen frenzy has given a healthy indication that both the industry and the public can still respond to the better things.

Marty won the Grand Prix at the 1955 Cannes Film Festival in France—a highbrow distinction that occasionally has been the kiss of death to a picture competing in the popular market place. Almost everybody seemed to like Marty, though, except that some of us complained mildly about one or two contrived touches in author Paddy Chayefsky’s otherwise marvelously faithful dialogue. Months after North Americans in droves acclaimed the production at the ticket windows, Britons were doing the same. Gavin Lambert, one of the best and toughest of the London Critics, saluted it as an "intimate and unusually

attractive film . . . something rare in the American cinema today: a subtle, ironic and compassionate study of ordinary human relationships.’’

Two films from Britain (The Dam Busters, The Divided Heart), one from France (The Sheep Has 5 Legs) and one from Sweden (The Great Adventure) are included in my personal-choice list of the Ten Best Movies of 1955. The other five are from Hollywood.

the world’s most expert documentaries. The longpostponed arrival of regular Canadian entertainment features appeared not much nearer than it did a year ago. But Canadian screen actors, as always, did well in London and Hollywood. To my taste, one of the year’s most skillful supporting-role performances was that of Arthur Hill as an earnest young Canadian test pilot in The Deep Blue Sea, a wordy but civilized specimen from Britain. He got his start at King Edward High School in Vancouver.

THESE WERE THE 10 WORST

“A corny jungle epic, involving Robert Ryan and Barbara Stanwyck, who has a way with elephants."

5. BRING YOUR SMILE ALONG

10. PEARL OF THE SOUTH PACIFIC

WORST PERFORMANCE BY AN ACTOR:

Liberace in Sincerely Yours.

WORST PERFORMANCE BY AN ACTRESS:

Lana Turner in The Prodigal.

by Frankie Laine in Bring Your Smile Along.

GILMOUR ACCLAIMS THESE 1955 SHOWS AND STARS

BEST CANADIAN FILM: To Serve the Mind, a documentary about psychiatry, produced by Tom Daly and directed by Stanley Jackson for the National Film Board.

BEST SCRIPT ADAPTED FOR SCREEN: Marty, by Paddy Chayefsky, from his own TV drama.

BEST DIRECTION: by William Wyler, in The Desperate

MOST PROMISING NEW DIRECTOR: Delbert Mann, who did Marty — veteran in TV, new hand in Hollywood.

BEST PHOTOGRAPHY IN BLACK-AND-WHITE: The Desperate

BEST USE OF CINEMASCOPE SCREEN: by director Elia Kazan and camera chief Ted McCord, in East of Eden.

SHAPELIEST LEGS (SENIOR DIVISION) : those of Joan Crawford in Female on the Beach.

MOST INTERESTING LOVE SCENE: the watching-the-fireworks episode between Cary Grant and Grace Kelly in To Catch a Thief.

her screen debut as the gushy TV hostess in It’s Always Fair Weather.

Among other performances Gilmour especially enjoyed

David Wayne as the goggle-eyed visitor, Frank Sinatra as the bachelor wolf, Celeste Holm as the marriage-minded violinist—all in The Tender Trap, although this pleasant comedy strikes me as being too long and repetitious. . . Dan Dailey as the ulcer-ridden TV huckster, who wants to be an artist, in It’s Always Fair Weather . . . Arthur Kennedy as the Communist-line lawyer, Juano Hernandez as the Negro judge, in Trial . . . Michael Redgrave as the mild, compassion-

ate and stubborn English scientist in The Dam Busters . . . William Powell as Doc, Henry Fonda as Mister Roberts, in the latter-named comedy . . . Gordon MacRae as baritone Curly in Oklahoma! ... Jo Van Fleet as the unhappy Cal’s brothel-boss mama in East of Eden . . . Peggy Lee as the sad torch-singing gun moll in Pete Kelly’s Blues . . . Jean Simmons as the Save-aSoul Mission cutie in Guys and Dolls; also B. S. Pully, Sheldon Leonard and Stubby Kaye in same musical as tough Runyon softies . . . Bette Davis as fiery Bess of England in The Virgin Queen . . . John Mills as the polite little English privateeye in The End of the Affair . . . Jack Lemmon

as the wholesome wolf in My Sister Eileen . . . Julie Harris as the madcap English playgirl in I Am a Camera . . . Lillian Gish as the guntoting old spinster in The Night of the Hunter . . . Charles Coburn as the college president in How to Be Very, Very Popular . . . Edward Andrews as the folksy rackets chief in The Phénix City Story . . . Robert Ryan as the smooth, complicated hoodlum in House of Bamboo . . . Yvonne Mitchell as the war orphan’s mother in The Divided Heart . . . Todd Duncan as the baritone Negro prisoner in Unchained . . . Fess Parker as Davy Crockett . . . Estelle Winwood as the fairy godmother in The Glass Slipper. ★

THESE FILMS WERE AMONG 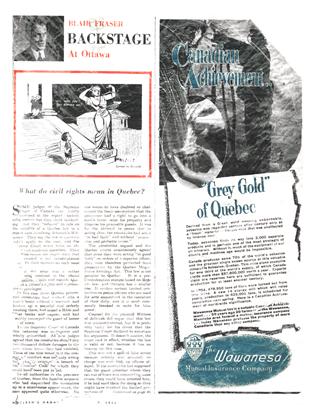