Reach for the Sky: Based on Paul Brickhill's biography of Wing Commander Douglas Bader, this overlong but solid and stirring British film offers a superb performance by Kenneth More as the legless daredevil who became one of Hitler’s scourges in the Royal Air Force. A compassionate nurse (Dorothy Alison) helped him overcome his infirmities.

The Ambassador’s Daughter: A romantic comedy, transparent in plot but gaily and persuasively done, with handsome Paris backdrops. Olivia de Havilland, John Forsythe, Myrna I oy and the late Edward Arnold are all pleasantly involved.

The Black Sleep: Until its ludicrously overdrawn climax, this isn’t too bad a specimen of the old-fashioned science-fiction horror yarn, with Basil Rathbone as a mad surgeon.

Bus Stop: Considerably expanded from the single-set stage play, Hollywood’s version of the William Inge comedy has the spectacular Marilyn Monroe in scanties and a likeable cowboy newcomer (Don Murray). The picture may make a fortune for its owners but its comic style is often uncomfortably broad and nudging. Rating: fair.

Fa Strada: A sombre but often deeply touching Italian tragedy about a surly primitive (Anthony Quinn) and the half-witted peasant girl (Giulietta Masina) whom he enslaves.

Private’s Progress: A military farce from Britain, much funnier than most of its competitors in this congested category.

The Bad Seed: Suspense and horror. Good until weak ending.

The Birds & the Bees: Comedy. Fair.

The King and I: Music-drama. Tops. The Ladykillers: Comedy. Good.

Ihe Man Who Knew Too Much: Crime and suspense. Excellent.

On the Threshold of Space: Factual science thriller. Good.

Somebody Up There Likes Me: Crimeand-boxing biography. Good. 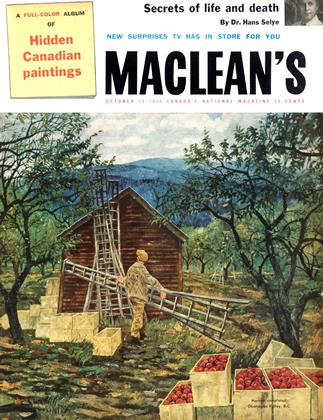