Re your article on Albert Horsley, or Harry Orchard, How Harry Orchard Murdered Twenty Men (Sept. 15): I wish to say we were both born and grew up here. He had a good mother and father, and led Wednesday-night prayer meeting here for several years. I am eighty-five now and remember him well. I have been in nearly every place in Idaho he was, knew plenty of people there who knew him, visited him in the pen at Boise, know all about his western career. He killed twenty-seven men, not twenty.

That is one article you should never have printed. It would be much better to allow such characters to rest peacefully in their graves.—s. w. MONTGOMERY, VVOOI JR. ONT.

• I was living at Lewiston, Idaho, at the time of Harry Orchard's trial . . . and I worked with men who had been imprisoned in what was known as the bullpen in the Coeur d’Alene district. These men were penned up by the mine owners for months and finally turned loose and told there were no charges against them. According to these men, the mine owners were the first offenders. They were determined to break the union at all cost, regardless of the means they had to take.

While these men did not approve all that was done, they still contended they fought with the same tools that were used by the mine owners.—o. ROY ROBISON, CHINOOK, ALIA.

What’s So Smart About Marathons? you ask (Sept. 1). Granted there are a lot of foolish marathons, but I thank God we have red-blooded Canadians who are will-

ing to face up to supreme challenges and strive to overcome them.

Marathons inspire millions to participate to some extent in sports, and heaven only knows we need something to get our kids away from the TV sets long enough to develop a few MUSCLES.-CORDON C. ROWAN, TORONTO.

For memories, radio is tops

Hugh Garner’s article. Remember When We Raved About Radio? (Sept. 1 ), brought back beautiful memories of days when radio was really something we all had to sit and listen to. All who read this article will have memories that TV cannot equal.—c. BUTLER, VANCOUVER.

• Garner refers to Boake Carter as the only U. S. commentator with a British accent. Years ago Carter described his feelings upon becoming an American citizen. The gist of his words was that for the first time in his life he felt free.

Carter was tin Englishman born on foreign soil, his father being in the British diplomatic service . . . He is now dead. I BELIEVE.-STEPHEN YORK, TORONTO.

What it takes to he an MI)

I read with interest Dr. Sidney Smith’s article, Does More Money than Brains Go to College? (Sept. 15). I was struck particularly by his statement that the

shortage of manpower in the healing professions was fairly acute.

I wonder if Dr. Smith has ever read a questionnaire that an applicant to medical school is required to fill out. If not, he might be interested to know that it contains such queries as: How tall are you? Religious denomination? Have you ever attended a summer camp? Name the sports in which you have taken part . . . Have you any hobbies? Was there a cadet corps in your school? . . .

I fail to understand what materiality can attach to a candidate's religion or hobbies, or what bearing his having tittended a summer camp, or drilled in a cadet corps, can have on his becoming a good, bad or indifferent doctor—unless of course the doctor of the future will be cal led upon to play “catch" with his patients, or perhaps go on long hikes.— HELEN ALLEN,TORONTO.

A queen has rights

Doesn't Carl Zeimer, of Edmonton, know that Elizabeth, being Queen of Canada, has every right to visit our country (Mailbag, Sept. 15)? How can "her presence on Canadian soil constitute infringement of our national sovereignty”? —E. M. DAVIDSON, ST. LAMBERT, QUE.

Congratulations on your most interesting and informative account of the Baltimore slum-clearance plan in the Aug. 4 issue (A Blueprint to Stop Our Cities' Decay). Although I do not speak officially for Toronto’s United Action for Slum Clearance. I am quite sure my pleasure in reading your excellent article is shared by the entire committee.

It is very encouraging to see that what the UASC is striving to set in motion in Toronto has been undertaken so successfully elsewhere, under somewhat similar circumstances. Here is concrete proof that not only is there need for slum clearance but that there is a need for citizens’ concern with the PROBLEM.-MRS. E. R.

I finished reading Bluebell Stewart Phillips' article. We Adopted a Family of Criminals (Sept. I ). in tears—tears of happiness in knowing what a worth while and wonderful life Bluebell, her husband and family have lived. Bluebell gives all ol the credit for their work to her husband, hut having known Bluebell as a little girl and up until she left home and was married. I am sure no little credit should also be hers, and that, without her. the husband's mission would not have been so REWARDING.-IVY E. BOWMAN, REGINA.

• I hope some of the folks who favor capital punishment read the article.— WILLIAM S. BOWER, OSGOODE. ONI.

How many whips in a whippoorwill?

I have just read the paragraph in Parade (Aug. 18) about the call of the whippoorwills. Eleven - year - old Eric's camp counselor who said these birds call eighty-eight times, no more, no less, has not made the acquaintance of this bird in Manitoba.

For years I owned a cottage on the shore of I.ake Winnipeg. How the whippoorwills whipped! Often 1 have listened and counted. The number of whips varied

—sometimes only a few. and sometimes a great many. The greatest number I counted was a hundred and TWO.-GER-

Father Charles Lanphier should give exact instances of "hot-rod evangelism" presented by the CBC or any radio or TV station (What Will Fowler Say About TV?, Sept. 15) . . . Who is being slurred —the Salvation Army. Baptists, Mennonites. Methodists, Adventists, Jehovah's Witnesses. Pentecostal believers?

Millions of people have lived better lives because of preachers like Billy Sunday. Billy Graham. Oral Roberts and many other live-wire outlets for evangelical NEWS-SPREADING.-HAZEL M. SLACKHOUSE, GALT, ONT.

No bid from Prince Charming?

Re Eva-Lis Wuorio's article, Men Are loo Much Trouble to Marry! (Sept. I ): It's possible that her hatred of mankind is brought on by the reason that no Prince Charming wants her in the first place.-G. DOUCET, SAINT JOHN, N.B.

• Tell Eva-Lis Wuorio to go back to her native Finland. She will find men there who make wonderful husbands. I know, for 1 married a Finn, although a Canadian one, and can speak from practical EXPERIENCE.-MRS. L. W. KUNELIUS, CALGARY.

• I greatly enjoyed the article by Miss Wuorio on why she prefers single blessedness, and was amused with the apologetic title you men gave it: For the Sake of Argument. Don't kid yourselves, hoys— the gal meant what she said! Women are persons nowadays and can afford to he choosy—or didn’t you know?

However, 1 personally wish that your very capable and charming writer would marry, if only to change her name. I can't ever seem to pronounce it. I know a fine chap, name of Smith . . . Not in the market MYSELF.-GEO. IE WILLIS, VANCOUVER.

The road hack to the farm

In The Desperate Plight of the Small Farmer (Aug. 18) Prof. W. B. Baker says the trend away from the farm is inevitable and healthy if the cities can provide jobs for the ex-farmers. Personally I’m from Missouri. If the boom-and-bust cycle of our system of distribution holds lo course, it may only be a year or two until the cities wished half their present populations were on the FARM.-A. W. MACHIN, MANNVII.l.E, ALIA.

• The article is belated—approximately thirty-five years. For the farmer the Depression commenced in 1920 . . . The conditions depicted arc not confined to rural areas. The once-popular western town is also adversely affected. Already the exodus has commenced.—.). H. POYSER, ROBLIN, MAN.

Edmund Carpenter’s article, Let’s Stop Huckstering Religion (Aug. 18), was worth a year’s subscription. It is past time that the public rebuke high-pressure salesmanship of the things of the spirit.— A. ERNEST SHERRATT, MAYERTHORPE, ALTA.

• Billy Graham does not say man can find a solution for his problems within himself, nor within the Bible as a hook, hut in God, who reveals Himself through the Bible.

Carpenter is not dogmatic but suggests man’s inner conflict may be reflections of larger conflicts in the world outside. This is an old line—if man’s environment was right, he would be right. It didn’t work in the Garden of Eden, and hasn’t been proven SINCE.-REV. C. E. DUNKING, OORMEEY, ONT.

• Can Carpenter point out to mankind a better way?—t). .). BOYO, BAYHEAD, SCOTLAND.

• The statement that Dr. Peale's book, The Power of Positive Thinking, has outsold everything except the Bible, is proof of its worth. A million read his hooks and pamphlets. Can they all be stupid and gullible?-A. MARION FOX, TORONTO.

• Timely, intelligent, clear and dignified. 1 should like to hear more from Dr. Carpenter on the positive, constructive side of this subject of religious thinking and living, and how to communicate the same to other people in this DAY.-REV. A. E. MILESON, BRIGHT’S GROVE, ONT. ic 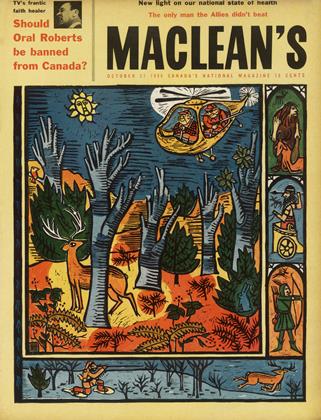