A Vancouver traveling man writes us from Prince Rupert that he’d just got in from Kitwanga, one hundred and fifty miles northeast of there on the CNR, where he called on the manager of the Hudson’s Bay store. In the middle of his interview the store manager excused himself to serve an elderly Indian customer, and when he returned it was a moment before the traveler could get the manager’s mind back on the business at hand.

“You know, I don't suppose that would happen too often anywhere in Canada,” the Bay man observed with a bemused smile. “I just cashed that chap’s oldage pension, and with part of it he bought diapers for his newborn son.”

The fear of hell may have lost a lot of ground with parents trying to din moral values into their young, but not with one mother in Gowganda, Ont. Trying to impress on her three small children that greed for money was wrong she told them that people who live only for money go to the bad place when they die, where they are thrown into a big pit and have dollar bills pushed down their throats until they choke. This certainly seemed to have a sobering effect on the children but after a reflective pause six-year-old Jean observed wistfully, “You know, mummy, I think that would be a nice way to go.”

A Toronto woman who took her two children on a pilgrimage to the House of Commons during a week-end visit to Ottawa, reports getting an unexpected insight into matters of national concern. The guide who toured them about, along

with several other family groups, gave them a lot of fascinating details about how the library had been restored to look exactly as it had before the fire of a few years ago, even to putting the old gaslight fixtures back in place. Our spy heard a little girl ask her mother, “Do they really burn gas, mother?” which drew one of those looks parents wear when they wish their young wouldn’t display their ignorance. “Sssh!” she hushed the child. “Of course not, dear—not until the pipeline comes through.”

Page 5 of a recent issue of the Ottawa Citizen carried a story from Sudbury, Ont., telling how a runaway train of twenty-five freight cars loaded with coke for the mines piled into a standing diesel engine, injuring no one but upsetting three cars. We don’t know why the same story appeared in condensed form on page 19 of the same issue, but we suspect

some censor had been at it because in this version the freight cars were loaded with soft drinks.

A fellow in Lunenburg County, N.S., tells us he can’t remember a year when the price of new potatoes climbed as high as it did this season. One roadside stand down there had them listed at sixty cents a peek.

A precocious three-year-old in St. Vital, Man., who frequently turns up at the corner store on errands for her mother, recently arrived asking for a quart of milk. She handed over the money and started home, but the heavy bottle al-

most dragged her down. Finally she did put it down, dragged it over to the curb, removed the cap, poured half the contents into the gutter, and trotted easily home with what was left.

Any season is open season on parkers to a city cop, of course, but one fighting game bird almost got away from a Hamilton constable recently. About to

issue a parking ticket as the woman driver walked up to her car he attempted to chide her gently. She refused to discuss the matter and climbed into her car. When he tried to hand the ticket to her she rolled up the window and locked the door. When he made to slide it under the windshield wiper, she started it wiping—and drove off. She didn’t barricade her mail box, however, and the summons finally caught up with her. 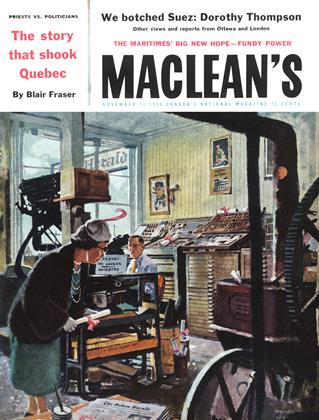