There is an old saying that coming events cast their shadow before them—but it is not always so. Certainly there were few of us, even in the House of Commons, who had any warning that Britain might join a customs union of western Europe.

The first inkling I had was from Sir Robert Boothby who sits in parliament for the Scottish (herring industry) constituency of East Aberdeenshire.

I had dropped in at his flat near Sloane Square and found him using a terrifying new type of telephone. It had no earphones and no mouthpiece. Boothby just talked toward it and the voice at the other end came back for all to hear.

Boothby signaled me to sit down and partake of such liquid refreshment as was available and then addressed the machine with these words: “Pretty soon you will see the government putting out feelers for a West European customs union with Britain joining in.”

“Won’t that cause a devil of a row?” asked the other voice. “Yes and no,” said Boothby. “Max Beaverbrook will kick up a great stink, but you will find that a lot of the old imperialist gang are having new ideas.”

A few moments later the telephone conversation ended and Boothby wandered about the room delivering to me his ideas on this new conception of Conservative policy.

“Britain has always played a dual role,” said Boothby. “She is an imperial pioneer but she is also a European power. That has been the source of her greatness and also her tragedy. To preserve her island kingdom she had to ensure the balance of power in Europe. So in turn she bumped off Napoleon, the Kaiser and Hitler. It had to be done. Otherwise she would have been stripped of her colonial possessions, and we would have enjoyed—I use the word in its technical sense—the lowest standard of living in the Western world.”

Boothby is a brilliant fellow with an ironic gift that always makes him a big draw when he speaks in the Commons. Unhappily for his own career he is of such an independent mind that when he does address the House there is equal apprehension on both sides. Probably he caught that spirit of defiance from being parliamentary secretary to Winston Churchill in his rebellious 1920s.

But in spite of Boothby’s great experience I cannot think that the West European Free Trade Union will come into being without a bitter campaign against it in Britain. It is true that there is no Joe Chamberlain to beat the imperial drum, nor is there a Leo Amery to proclaim the glory of our far-flung empire. But Chamberlain and Amery have many political descendants even if the fire lit by their spirit is burning low.

Many years ago our old friend Lord Beaverbrook conceived the policy of Empire Free Trade and ran a violent campaign across Britain to try to force its acceptance on Premier Stanley Baldwin and the Tory party. I was the editor of the Daily Express at that time and bombarded Baldwin with all the high and low explosives that we could produce from our armory of words.

“Why not extend NATO to trade?“ says Chancellor Macmillan and argues for a union of oíd enemies

Empire Free Trade! A free exchange of commodities and manufactured goods in a world-wide combination of British nations protected by a tariff wall! This was our dream.

It was probably too late. Such a plan could have been accomplished in Joe Chamberlain’s day but the twentieth century was developing its own ideas.

Canada, loyal Canada, with her scented prairies, her expanding economy and her physical and psychic affinity with America, was not likely to think that her economic future lay in an imperial trading unit. New York had become the financial Mecca of Canadians, and London was reduced to a distant shrine.

It is truc tiltil there were Canadians who saw danger in the growing power of the Yankee dollar but Britain, weakened by the wars, could not finance the leaping development of the dominion.

In my many journeys home to Canada 1 have seen the failing struggle of British manufacturers to hold their own against the overwhelming pressure of American imports. With the tragedy of the second war the weakened sterling economy had to find its markets away from the dollar continent.

Meanwhile the map of Europe was demanding the concentrated interest of the British. Hitler in his maniacal war had brought Russia from a backward giant to an immense power.

With the defeat of Hitler the Balkans came under the despotic rule of the hammer and sickle. Austria was already truncated and made impotent. Germany was partitioned into East and West. From the soul-crushing horror of German occupation the French nation was rising slowly to a new discipline and determination.

The crude carve-up of a defeated Germany had produced a showpiece for the world to see. The Iron Curtain created two Europes—the East and the West.

The British imperialists said: "Leave Europe to itself. Our eyes should be turned across the seas to the dominions and the colonies. That is where our strength lies.” Bui Britain had neither the spirit nor the means to lead the scattered commonwealth and colonies into a united future.

I do not know when or where the idea ol a West European customs union was horn. To some extent it had been talked about in the Strasbourg parliament where, periodically, foreign statesmen gathered for pleasant companionship, but no one took it as a practical measure.

As far as Britain is concerned there can be no doubt that Chancellor Harold Macmillan is the chief protagonist of the scheme. In doing so he undoubtedly realized the extent to which the plan would be attacked by the imperialists, but controversy has surrounded Macmillan throughout his political career.

He is a man of high intellectual attainment and possesses what is sometimes called “a sense of the centuries.” As a soldier in the first war and a minister in the second he saw the rise of Germany from the despair of defeat.

Therefore I imagine that after Hitler’s defeat when the stricken continent began to regain something like normal life and vibrated with a new vitality, he said to himself: "Why not harness Western Germany to the Atlantic powers? Why not extend NATO to trade and not keep it merely for defense?”

Perhaps he realized the necessity for a strong France now removed from the threat of a Kaiser or a Hitler. Then why not make France and Western Germany equal partners in a free-trade customs union? From that to the proposed inclusion of Great Britain was but a logical step. Let the union of West Europe and Great Britain be welded in peace and not wait for war.

This summer I motored with my family some fifteen hundred miles, beginning at battered old Boulogne and driving through those French towns and by those French rivers whose names spelled death to a generation. We stayed by the lovely waters of Lake Garda in Italy, we conquered the Alps in our car and we slept in Switzerland becau*e there is not much else to do there except count the mountains.

Again and again in our travels I had the feeling that we ourselves are Europeans. Canadians yes—but far back we were Saxons, Celts or Normans. I was conscious of the unity of West Europe on this visit as if it were a country instead of a continent.

Yet three times in living memory Europe has fought a war which by its very essence was a civil war. When Germans, Frenchmen and Britons kill each other it is not war so much as fratricide. And now comes a move that the nations of Western Europe, including the United Kingdom, should enter upon an economic alliance that would bring about the free exchange of goods and commodities. The origin is European, but can Britain in her island isolation declare that she is not of the continent and can therefore only participate in the union of those English-speaking nations that pay tribute to the crown?

It is not an easy question to answer. Hitler once said contemptuously that the British had an empire held together by moonbeams. But now we are considering a practical trading partnership with nations far remote from the moonbeams of the British connection.

Surely the British colonial territories would profit by such a service since the market for raw materials would not only be vast but unhindered by currency difficulties. Presumably there would be a considerable pooling of technical knowledge which would also be of mutual value.

But above all there would exist a political unification of Britain, West Germany, France, Italy and the Benelux countries. Such a unit must by its very character build a protective dam against the thrusting tide of communism.

Nor need such a trading community be a threat to the United States. This is an era of huge amalgamations and it is better for giants to trade with giants than with pygmies. I firmly believe that the British commonwealth must prosper from such a formation. The rising standard of living would create an everexpanding demand for the raw materials in which the colonial territories abound.

But above all it could give to Europe a stability against which no maniac dictator could rouse his mesmerized people to aggressive war.

I know that my friend Max Beaverbrook will castigate me for these words and that he will charge me with being a renegade. But science has so dwarfed the size of the world that progress, peace and stability can only be sustained by an amalgamation of nations so powerful that war would only be undertaken by a madman and with no possible hope of victory.

With a rising standard of living even the wheat of Canada’s prairies would be in full demand again. Therefore on that imperial note 1 give support to the idea of a West European customs union believing that under wise leadership it can strengthen the bonds of peace, enhance the living standards of the underprivileged, and gradually release the genius of the scientists to the betterment of a peaceful world instead of concentrating on the mass destruction of humanity, -fc- 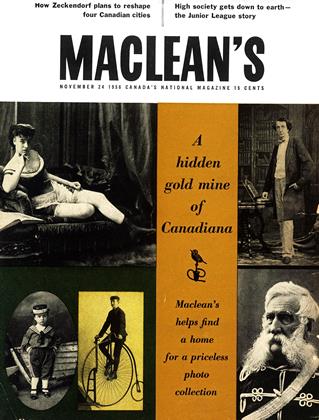