To those of us who sit in the British House of Commons the memory of the Suez intervention by France and Britain will linger to the end of our days. For a time at the height of the crisis it seemed as if the crowds in the streets might get out of hand, but fortunately the good humor of London’s mounted police and the imperturbability of their horses won the day. It is true that Mr. Aneurin Bevan complained to parliament of the use of police horses but no one paid much attention. To the British a horse is almost a sacred animal.

Inevitably at such a time the British people are moved by emotionalism rather than reason. We all remember how they cheered Neville Chamberlain on his return from Munich and stormed Downing Street and its environs to cheer and weep and w'ave. It is quite true that now the word “Munich” has become a synonym for “cowardice” and “indecision,” hut crowds are like that. But when Sir Anthony Eden and the French government intervened to prevent the spread of the Israel-Arab war, the indignation of the British public was at boiling point. No wonder we had to order out the mounted police.

I have always known that Anthony Eden was tough but the strain that he was under would have broken a man of iron. Day after day he had to face the socialist opposition, which was not only inflamed with wrath but was spurred on with the wild hope that there would he a break in the C onservative Party and that the Queen would send for Gaitskell to form a

government and thus save civilization. There was not a day’s respite for the prime minister. Parliament even took the unprecedented step of sitting on Saturday. But at least we MPs had Sunday off while Sir Anthony’s twenty - four - hour ordeal went on.

Nor was he spared the dagger thrust from within his own camp. The tall, good-looking, well-groomed Anthony Nutting, minister of state for foreign affairs, chose this moment to resign as a protest against Eden’s policy. Not even the rather foolish smoke-room joke, “Out of Nutting nutting comes,” could hide the harm that the resignation had done to the prime minister.

But that was the only defection. The British Lories are pretty tough and like all political parties they number some out-and-out careerists in their ranks, but they rallied firmly to Eden in this crisis.

Sir Anthony, however, was faced by a much more powerful opponent than the melancholy Nutting. Not long ago I described the antigovernment campaign ot the Daily Mirror mass-circulation group. The attacks at that time however were mere malignant pleasantries compared with the onslaught against Eden when he sent out forces to the Middle East.

I do not know what Eden is made of but the strain must have been unbearable. Yet each day as he rose to speak to the House he never faltered for a word and was never thrown off his guard by an interjection or a howling chorus of, “Resign, resign!” Opposite him was Hugh Gaitskell, the leader of (he opposition. He was merciless bul he was not unfair. Beside him was his chief lieutenant. Aneurin Bevan, who once described Gaitskell as a desiccated adding machine. But for once Gaitskell was not worrying about his chief subordinate—the whole socialist pack was united in pursuit of the fox.

Meantime the public were taking a hand. True to the good old British habit, they were writing to their MBs, urging us to get rid of Sir Anthony before he brought any further disgrace to Britain.

If you will forgive a personal reference, let me put on record that the letters from my constituents were ninetynine percent hostile to the government. That is a big percentage, but you must remember the people who write to the press do so because they want to protest. Otherwise, why write a letter? In my north-I ondon constituency there is a local weekly newspaper called the Palmers Green Gazette (the district of Palmers Green is included in the borough of Southgate). At the height of the ArahIsrael drama I sent this letter for publication in that paper:

Í have received many letters from my constituents, urging me to denounce Sir Anthony Eden and to dissociate myself from the government's direct intervention in the Middle East. 1 here is no reason to doubt the sincerity and deep anxiety which prompted these letters. In turn. I trust that they will not doubt that my opinions are just as sincerely held.

For many tragic years the League of Nations and then the United Nations have supplied a sop to the conscience and an excuse for inaction. In the case of the United Nations the veto was introduced to make certain that the wobblers would always have their way. That was why President Truman acted first against the North Koreans' thrust and then presented UNO with an accomplished fact.

Russia has been bedeviling the Middle East for the last two years. Russia was behind Nasser's seizure of the canal. Russia would have intervened on Egypt's side in the lsrael-Egyptian war. America could not act because as usual she was on the eve ot an election. Only France and Britain dared to face the facts of life and to act.

Sir Anthony Eden, who was himself a brave soldier and who lost a son in the Second World War, had the courage for the occasion. He sent our troops to intervene between the Arabs and the Israelis. In short, he did what the United Nations should have done and what, because of the veto, would never have been done. Because ot his realism and courage he has been vilified by a malignant section of the British press and howled down by the socialists in the House of Commons and by the mobs in the street. I hat was to be expected. But now he is also being condemned by kindly well-meaning people who believe that a nation's conscience and a nation's security should be left to an international body in which Russia, the murderer of nations, has the power of veto.

I support Sir Anthony Eden in every action that he has taken. And in doing so I believe that I have interpreted the true spirit of Southgate.

My only purpose in asking the readers ol Maclean’s to read that letter is to show the relation of a Tory MP to his British constituents at this period.

There is such a hatred of war and such a revulsion against young men being killed or maimed in conflict with a small power like Egypt that the conscience of the nation cries out against it. Every Conservative MP in Britain is faced with that revulsion from his well-meaning constituents. Yet I have no doubt that the eventual verdict will be in Sir Anthony’s favor.

War in the name of peace

Russia wanted an Israel-Arab war, knowing that the Western powers were committed to the security and survival of the state of Israel, which was created by the victors of the 1914-1918 war at the behest of the United States. With such a war Russia could threaten the West and give aid to the Arabs, and all in the name of peace. Afterward Russia could assume the role of protector of the Arabs and the controller of Middle East oil resources. Understandably, the decent ordinary

British folk would ask. "What does oil matter compared to the lives of our young men?” That is a cry from the heart and it would rouse a response from normal people everywhere. But sometimes a question can he answered by a question: “What would happen to the livelihood of the people of Britain and Western Europe if the Middle East and its oil wells passed under the control and armed might of Russia?”

Undoubtedly Russia's timetable was completely upset by the risings in Poland and Hungary. The bravery of the martyrs in those countries may well have saved us all from a third world war. Nor do I use those words lightly. That is the opinion of the inner political circles of Britain and France. By ending the IsraelArab war the British and French gave the United Nations a chance to act with a giant’s strength.

Out of it has come the opportunity — perhaps the last opportunity — for the United Nations to become an instrument of real authority instead of a mere debating society that by its weakness gives encouragement to the wicked and dismay to the virtuous.

As far as Britain is concerned. 1 believe that this country will yet proclaim Sir Anthony Eiden as a man of great heart and strength of purpose who dared when others dithered. it 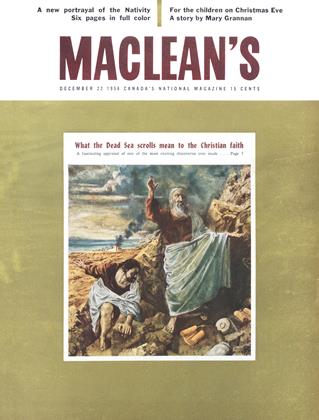