If nationalism's okay —it's okay for everybody December 8 1956

This year of 1956, now drawing to its fretful close, is likely to be compared in the history books of the future with another troubled year: 1848. For 1848 was also a time of

With the hindsight of history, it’s a simple matter now to separate the bad guys from the good guys in the troubled uprisings of 1848. The good guys were the rebels, the nationalists, the Garibaldis. The bad guys were those who , tried to maintain the status quo—the Metternichs and Hapsburgs.

But at the time, the matter was much more confusing. To most Englishmen, for instance, the Irish undoubtedly were bad guys, though the Italian rebels throwing off a foreign yoke were good guys. Yet both these peoples were seeking exactly the same thing: not freedom as we understand it, but more properly the simple right to be themselves and go their own way— to have their own flag, their own language, their own nation and their own institutions— to make their own mistakes if need be. but free from the dominance of another country.

The same yearning motivates a variety of disparate peoples in 1956. Nationalism is as contagious as the plague and even Canada this year has not been immune from the disease. If there is a difference between the de-

sires and aims of the Poles and the Hungarians on the one hand and the Cypriots and the Egyptians on the other (not to mention the Malayans, Algerians, Israelites and Kikiyu), it is surely one of degree.

Yet the Russians see the Hungarian rebels as wicked counter-revolutionaries and the Egyptian nationalists as heroes casting aside the colonial yoke, while the British see the Egyptians as tools of wicked communism and the Hungarians as freedom-loving patriots.

Many Americans, we suspect, think of the Hungarian and Egyptian nationalists alike as “good guys” and sympathize with the attempts by the Algerians to free themselves of French colonial rule—as much as they sympathize with the Poles who want to get rid of the Russians. But those Icelanders, Okinawans and Japanese who want the Yanks to go home are thought of as troublemakers and radicals of the deepest dye.

How. then, will 1956 appear in the school texts of the future?

History’s verdict is less likely to he complicated by selfish emotions or idealistic aspirations. History will probably report, quite dispassionately, that colonialism’s decline was accelerated by the events of this year which saw parallel upheavals of varying intensity in four empires — the Russian, French, British and American. It will probably report that the political leaders of these empires, while making a great to-do about the aspirations of subject peoples elsewhere, acted with eighteenth-century morality and nineteenth-century cynicism when those aspirations touched their own interests. It will, we venture to predict, report that the attempts to quench the fires of nationalism were remarkably unsuccessful.

And it will add, no doubt, the wry comment that in 1956 none of the politicians appeared to have read the history books. 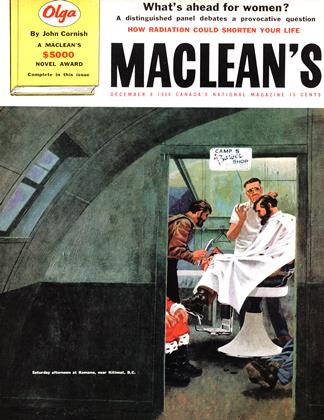