BEST BET PICNIC: William Inge’s enjoyable comedy-drama tells of a rolling stone (William Holden) who quickly gathers more than his share of lavender-scented moss while stirring up the womenfolk of a placid country town. Ace filmwriter Daniel Taradash (who did From Here to Eternity) has creatively adapted the play for the screen, and Broadway's Joshua Logan makes an impressive debut as a movie director, although one or two of the human relationships in the story are rather sketchily explained. On the whole, a dandy show for adults. With Rosalind Russell, Kim Novak, Susan Strasberg, Arthur O’Connell.

GLORY: Margaret O'Brien, now eighteen and lovely, is the charming star of this outrageously corny racetrack yarn. Fine for kiddies.

HEIDI AND PETER: The dubbed-in English dialogue often has a stilted ring, but a pleasant story and magnificent Alpine scenery make this a recommendable item for younger customers.

HELEN OF TROY: A real whopper of a widescreen costume spectacle, with Italy’s stunning Rossana Podesta as the queen with the face that launched a thousand ships. It’s good entertainment despite the presence of every cliché in the swashbuckler repertoire.

TARANTULA: A spider twice as big as a house, and growing bigger by the minute, is the villain in this science-fiction fable. There are a few exciting moments.

Giimour’s guide to the current crop

Cult of the Cobra: Horror. Poor.

5 Against the House: Drama. Fair.

Rebel Without a Cause: Drama. Fair. Running Wild: Crime. Fair.

The Sheep Has Five Legs: Comedy from France. Excellent. 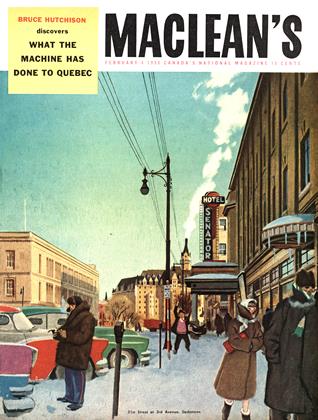