THE PRISONER: Alec Guinness as a bald, subtle and indomitable cardinal and Jack Hawkins as a razor-witted communist psychiatrist are the opponents in an intelligent British film which probes fairly deeply into some of the ideological problems of our times. Customers who insist that Guinness always be funny may be temporarily taken aback to discover him in an intellectual tragedy, but the net result is a movie of uncommon distinction.

DIABOLIQUE: A French horror-thriller bearing the imprint of director Henri-Georges Clouzot, who made The Wages of Fear. Ghoulish but far from dull, it tells of a hateful fellow whose corpse mysteriously vanishes after his wife and his mistress have jointly arranged his murder.

THE LIEUTENANT WORE SKIRTS: Ex-hero Tom Ewell’s trick knee gets him bounced out of the air force; but his adored spouse (Sheree North), who has re-enlisted to be near him, is accepted and sent to Hawaii. Hubby follows her there and soon finds himself in all sorts of complications. The plot is a formula job but much of the movie is amusing stuff in spite of that.

MAN WITH THE GUN: Samuel Goldwyn Jr.’s first try as a Hollywood producer indicates he may have inherited some of his sire's show-business sagacity. Robert Mitchum, looking a lot less drowsy than usual, plausibly depicts a professional “town tamer” who tackles the baddies in a tyrant-ridden western community.

THE SPOILERS: Rex Beach’s corny old novel about Alaskan claim jumpers has been filmed five times in forty-one years. Effort No. 6 can hardly fail to improve on No. 5.

I Died a Thousand Times: Crime and suspense. Poor.

The Man With the Golden Arm: Drugaddict drama. Good.

To Hell and Back: Suspense. Good. Trial: Drama. Excellent. 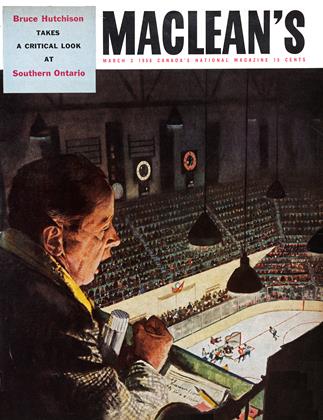