THE COURT JESTER: Danny Kaye and his reliable writerdirectors, Norman Panama and Melvin Frank, join forces in another high-spirited comedy, this one a burlesque of the screen’s own sword-opera spectaculars. As a craven buffoon who becomes the deadliest blade and boldest lover in Christendom whenever he is hypnotized by the palace witch, Danny is in fine fettle. Glynis Johns is the loyal maid who spurs him onward to glory.

DIANE: Handsomely staged, but slow and tedious, this is a melodrama of court intrigue, starring Lana Turner as a shapely power behind the throne of sixteenthcentury France.

FOREVER DARLING: A coy and frantic domestic farce, with one or two quite amusing scenes. A guardian angel (James Mason) helps Lucille Ball and Desi Arnaz save their marriage.

HILL 24 DOESN’T ANSWER: The anguished birth of the troubled state of Israel is movingly chronicled in a tough honest drama about street fighting in Jerusalem. Brilliantly photographed in the actual locale.

THE LAST HUNT: Except for a questionable multiplicity of gruesome close-ups of slaughtered buffalo, this is one of the best westerns in years. Superb widescreen camerawork, believable characters and slowly mounting tension are among its numerous assets. With Robert Taylor, Stewart Granger, Lloyd Nolan, Debra Paget.

All That Heaven Allows: Drama. Fair.

The Court-Martial of Billy Mitchell:

Lady and the Tramp: Cartoon. Good.

Man of the Moment: Comedy. Fair.

The Man With the Golden Arm: Drug-

Man With the Gun: Western. Good.

The Night My Number Came Up: British

The Night of the Hunter: Drama. Fair.

Rebel Without a Cause: Drama. Fair.

The View From Pompey’s Head: Drama. 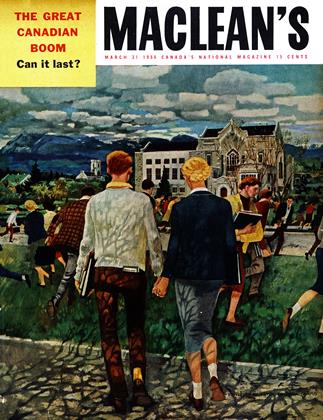