RICHARD III: Sir Laurence Olivier’s earlier Shakespeare films, Henry V and Hamlet, worthy though they were, now look like the work of a skilled apprentice compared with the mature mastery of movie making evident in this superb historical melodrama. A sort of medieval crime comic about a human monster, it is not one of Shakespeare’s best plays; as a motion picture, it grips and fascinates throughout its two hours and forty minutes. Olivier’s title-role performance is a triumph of subtlety and venom, and his surrounding cast is virtually an Honors List of the British legitimate theatre.

THE CONQUEROR: The vast battle scenes are properly spectacular but John Wayne, the weather-beaten old cowhand, was a curious choice to play Genghis Khan, the Mongol tyrant. Typical line of dialogue: “The slaves? Their tongues have been cut out. Speak freely!”

THE LADYKILLERS: Wearing a satanic bucktoothed make-up as the master brain of a quintet of London robbers, Alec Guinness is somewhat less believable than usual in this fast and ruthless British crime comedy. But Katie Johnson is nothing short of perfect as a prim old widow whose gentility terrifies the gang.

THE MAN WHO NEVER WAS: A superior spy thriller, based on Ewen Montagu’s true story about a corpse — with a fictitious “past" and important military documents — which helped the Allies invade Hitler’s Europe.

MEET ME IN LAS VEGAS: A dandy Hollywood musical, probably the best in that category since Seven Brides For Seven Brothers. With Dan Dailey and the gorgeous Cyd Charisse.

THE WOMAN FOR JOE: There are only a few flashes of honest emotion in this sad British melodrama about a carnival midget’s hopeless yearning for a full-grown glamor queen. 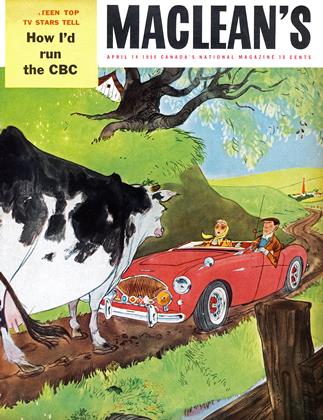