PREMIER Leslie Frost of Ontario, a soft-spoken man with an aptitude for friendly co-operation, has been stepping out of character lately to denounce the Liberal government at Ottawa in ever-stronger language. He has thus raised a question that fills some Conservatives with hope, and some Liberals with glum apprehension:

Will Leslie Frost, for the first time, throw his full strength behind George Drew and the national Conservative Party in next year’s federal election campaign?

For seven years after he succeeded Drew as premier of Ontario, Frost was conspicuously neutral in federal affairs. He took little trouble to hide his belief that Drew had been mistaken in conducting an implacable feud with Ottawa over dominion-provincial relations. Frost suspected, and the 1949 election seemed to prove him right, that English-speaking voters at least are merely bored by clamor about their provincial rights.

Not long after the 1949 campaign was over, Frost came quietly to Ottawa and made peace. He and Prime Minister Louis St. Laurent got on together famously; it was quite obvious that neither had any serious desire to dislodge the other. Frost signed a tax rental agreement of the sort that Drew had denounced as infamous, and was studiously moderate and courteous in all his public references to those nominal enemies, the federal Liberals. They in return were equally gentle with Frost.

The results of this mutual nonbelligerency were spectacular for both parties. In 1949 the voters of Ontario elected fifty-seven Liberals to federal seats, and only twenty-five Conservatives; two years later the same voters elected Leslie Frost and seventyeight other provincial Conservatives, and only eight Liberals. In 1953 the federal Liberals lost only six of their Ontario seats, taking fifty-one to the Conservatives’ thirty-three; last year Leslie Frost and his men again romped home in the provincial field with eighty-three to the Liberals’ eleven.

Hut since the Ontario provincial election last June, Premier Frost’s utterances in public and in private have heen much less friendly to Ottawa.

He has agreed, for example, to join Ottawa in financing the unprofitable section of the TransCanada Pipeline between the Manitoba border and Kapuskasing, Ont. As late as last fall, even some Conservative MPs assumed that this meant he approved of C. D. Howe’s pipeline policy. Since then the Conservatives have been assured that Frost is going along with the federal pipeline scheme solely because he couldn’t persuade Ottawa to a joint public-ownership plan. He has sent them word that he fully approves and supports their parliamentary fight against the pipeline bill.

Much more explicit have been his attacks on Ottawa’s new deal for sharing income and corporation taxes with provincial governments. Ever since the dominion-provincial conference last October at which the new tax deal was announced. Frost has been demanding a bigger share for provincial governments generally and for Ontario in particular. Ottawa, he says, was “wrong in 1945, wrong in 1952 and is wrong now.”

In carrying this particular complaint to the public, Frost has not tried to interest Ontario voters in the principles of dominion-provincial relations. On the contrary, he has simply talked about money. Whenever the opposition, especially the Liberal Opposition, suggests that Ontario should have some service or facility that it hasn’t got, Frost rejoins in effect:

“1 couldn’t agree with you more. If only those stony-hearted Shylocks in Ottawa would let us have the money to which we’re rightfully entitled a hundred millions a year more than they’re giving us now Ontario could have all these things at no extra cost. But as it is, we simply haven’t got the money.”

As a prelude to a federal election campaign, this sort of thing may prove to be extremely effective. Liberal dopesters have also noted with concern that Frost’s Ontario budget, though it comes right after his own provincial election, nevertheless has all the gentle sunny quality of a pre-election budget.

In spite of all these straws in the wind, some Liberals pooh-pooh the notion that Leslie Frost intends to drop his neutrality and intervene in federal affairs. He is sixty-one this year, only sixteen months younger than George Drew, and he has said he has no ambitions in the federal field. What, they ask, has Frost to gain by picking a needless quarrel with Ottawa?

Federal Conservatives have an answer to this. Frost himself may have no federal ambitions, they say, but his followers have. Several provincial members are said to be planning to resign from the Ontario Legislature and run for parliament next year. Others who will remain in the provincial field are nevertheless aware that the major avenues of political preferment. lead to and from Ottawa.

Until now, they have been content with the Frost policy of neutralism because they didn’t think the federal Conservatives had a chance. Now the climate has changed. Whether or not the Conservative Party can win a federal election next year (and few realists think it can, if St. Laurent is st ill Liberal leader) it is obviously gain-

ing strength and just as obviously is the sole alternative to a Liberal government. Whenever the Liberals go out the Conservatives will go in. And when that day comes the new Powers That Be will have no great love for fairweather friends who have done nothing until after the victory.

All this adds up to rather serious news for the Liberals. They expect to lose seats in Ontario anyway, but if Frost throws his full weight into the campaign, they’ll lose many more seats than they had counted on Conceivably it could mean the difference between victory and defeat, although that is improbable. But much less unlikely, and almost as unpalatable, is the possibility that the Liberal government might be left wholly dependent on Quebec for its survival.

SPEAKING OF ELECTION budgets, the one Walter Harris brought in last month is a perfect textbook example of the pre-election year, or John the Baptist, budget. It prepares the way.

In every sense but the political it is a conservative budget. Corporation tax, for instance, is expected to bring $285 million more than it brought last year, but $260 million of this is the unpaid balance of last year’s taxes. The real increase, according to the budget’s cautious estimate, is only $25 million— not much for a country in which boom conditions are still predicted.

Equally cautious, though, was the guess at the rate of the boom itself. The national product went up ten percent last year, but for 1956 no more than a five-percent rise is prophesied. True, this is the ten-year average—but the average includes the fairly sharp recession of 1954. If plans for capital investment are any guide, there’ll be no recession in 1956 but rather a continued expansion at something close to last year’s rate.

Even the conservative estimates in the budget work out to a surplus for the year of $113 million. That’s rather more than two percent of the total tax revenue—enough to be reassuring but not enough to make the taxpayer’s mouth water unduly. If, however, the real surplus should turn out to be twice that much—or even bigger than this year’s surplus would have been if the unpaid corporation tax had been included in the 1955 accounts—then of course a tax cut for 1957 becomes beautifully logical.

The fact that 1957 is an election year will be, of course, entirely coincidental. ★ 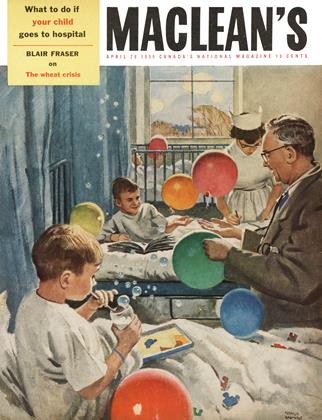