The Swan: Grace Kelly is a beauty engaged to playboy prince Alec Guinness. Apart from its newsy tie-in with the year's most publicized real-life romance, this is an adroit and literate high-style comedy, involving the talents of Jessie Royce Landis as the frantically ambitious mamma plotting to marry her daughter into the royal circle. The film, smoothly directed by Budapest-born Charles Vidor, is based on a stage play by Hungary’s Ferenc Molnar.

The Birds and The Bees: Television’s likable George Gobel appears as a sausage king’s shy vegetarian son and gets mixed up with an enchanting cardsharp (Mitzi Gaynor) in his movie debut. Some scenes are quite funny but an obediently guffawing studio audience is badly needed to make the rest of it seem anything but dull.

The Creature Walks Among Us: The fearsome Gill Man from the black lagoon undergoes surgery and becomes a land-dweller but soon finds himself in trouble as usual. Rating: fair.

Forbidden Planet: One of the better science-fiction items, ludicrous at times but brilliantly staged with CincmaScopic camera magic. The locale is the remote planet Altair-4 in the year 2200. With Walter Pidgcon, Anne Francis, Leslie Nielsen.

Invasion of the Body Snatchers: More science-fiction—and not half-bad until some frenzied overplaying spoils it near the finish. It’s about some gigantic pods which gradually turn all the people in a California town into walking, talking vegetables.

The Harder They Fall: Drama. Good.

The Man in the Gray Flannel Suit: Warand-business drama. Good.

The Man Who Knew Too Much: Crime and suspense. Excellent.

The Man Who Never Was: Espionage thriller. Excellent.

The Man With the Golden Arm: Drugaddict drama. Good.

Man With the Gun: Western. Good.

Miracle in the Rain: Drama. Fair.

Serenade: Lanza sings again! Dandy for Lanza fans; not for me. 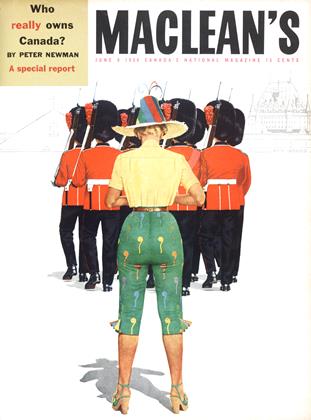