Should we all pay for splendid things only a few can see?

The Stratford Shakespearean Festival troupe, about to become the only Canadian company ever to play at the Edinburgh Festival, nearly had to decline the honor for lack of money to meet the expense of going there. The Canadian government was not prepared to help and the financial problem was made still more difficult by the circumstance that the Stratford Festival is also trying to raise a million dollars for a permanent theatre on the site of its famous tent.

Canada is negotiating, or conducting preliminary conversations with a view to negotiating, the purchase of a painting by Leonardo da Vinci which may cost a million and a half dollars. Several MPs will undoubtedly point out. if they haven’t done so already, that this sum would buy a million bushels of feed wheat or equally vast quantities of salt cod and potatoes.

These disparate events raise a question often asked in Canada, which so far has had but tentative and inconclusive answers: Ought such amounts of the taxpayers' money to be spent on cultural projects, however worthy, which only a minority of taxpayers will ever see? Is it right to require the citizenry at large to help pay for the presentation of classical drama in western Ontario and Renaissance art in Ottawa?

It may help to answer the question if we take a glance abroad.

Dusseldorf, a West German city about the size of Vancouver, last spring opened a magnificent new opera house which cost the equivalent of six million dollars in real terms. Its concert hall is a musician’s dream, an acoustic masterpiece, but it seats only fourteen hundred people at a time. Under no conceivable circumstances could such an enterprise "pay” in dollars and cents—it is a permanent economic burden.

Ten years ago Dusseldorf was a bomb-ruined Hat. It still has problems of housing, of employment. of refugee settlement which to a foreign observer seem appalling. Like all Germany it still has relatively low wages, relatively high prices and hence a spartan standard of living for the average family. Yet Dusseldorf used its scanty building materials, its limited supply of skilled labor and its hard-wrung tax money for a community venture that in economic terms was folly.

This is merely a new edition of an oft-told tale. England had not finished repairing bomb damage when the Royal Festival Hall was built, perhaps the finest concert hall in the world. Vienna was still a captive city on starvation rations w'hen the Viennese rebuilt their beloved opera house within its hollow shell. Apparently the citizens of these nations believed such things of greater national importance than immediate monetary gain.

Stratford has given to Canadian drama not only a well-deserved fame but a standard of excellence that already can be felt in other theatrical ventures across the land. A Leonardo da Vinci painting may do nothing directly for Canadian stature in the world of art, but it too will set a standard before our eyes—make us aware of what the first rate has that the second rate lacks; preserve us from the complacent illusion that every goose automatically becomes a swan if it was hatched in our own barnyard. 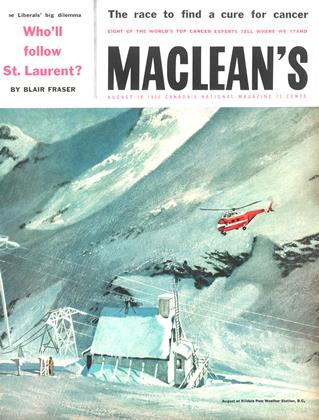