The Killing: Egg-domed Kwala Kwarian, as a muscle-man with an ogre’s sense of humor, stages a one-man riot to distract the police as a prelude to a racetrack holdup. The incentive: two million dollars. The result is one of the year’s freshest and most exciting crime dramas, establishing twenty-seven-year-old Stanley Kubrick as a writer-director of impressive talents.

The Bold and the Brave: Bouncy little Mickey Rooney, whose performances sometimes bore me to pieces, this time is likeable and convincing as a crapshooting G1 in a war story, better than most.

The Eddie Duchin Story: A sentimental biography—quite maudlin in spots but with many pleasant moments—of a popular pianist who became Manhattan’s darling in the 1930s. Tyrone Power competently handles the title role. With Kim Novak, James Whitmore.

Gaby: A romantic tear-jerker, presumably of special appeal to women. Wartime London is the locale, and the lovers are an orphaned French ballet dancer (Leslie Caron) and an aw-shucks Yank soldier (John Kerr). Rating: fair.

The Proud and Profane: A vulnerable widow in the Red Cross (Deborah Kerr) and an arrogant Marine colonel (William Holden) are the love-hate antagonists in this implausible war romance. It’s all expertly acted but I found it hard to swallow.

The Come-On: Crime and sex. Poor.

The Man in the Gray Flannel Suit:

The Man W'ho Knew Too Much: Crime and suspense. Excellent.

The Man Who Never Was: Espionage thriller. Excellent.

On the Threshold of Space: Factual science thriller. Good.

Star in the Dust: Western. Fair.

While the City Sleeps: Newspaper and crime drama. Fair. 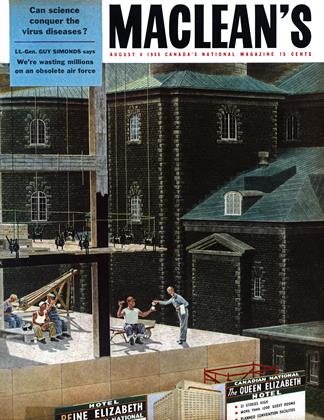