Somebody Up There Likes Me: Ex-convict Rocky Graziano’s real-life climb from the gutter to esteem and wealth as middleweight champion of the world—with the help of a girl who always believed in him as a human being—is convincingly dramatized in Ernest Lehman's screenplay. Paul Newman and Pier Angeli are well cast as the embattled sweethearts. The title, though, is misleading: religious fervor plays an almost-unnoticeable part in our hero’s regeneration. The fight scenes are terrific.

Invitation to the Dance: A three-part, all-dance, no-dialogue opus presenting Gene Kelly as director, choreographer and star. For me, it contains a few delightful moments—but only a few. sparsely strewn amid much that is either pretentious or second-rate. In abler hands, the same format may yet produce cherishable results.

John and Julie: Two English children run away to London to see the Coronation. A predictable little comedy-adventure, good fun for most youngsters and bolstered by newsreel shots of the actual event.

The King and I: Already saluted here but deserving another mention. It’s a glorious musical, by far the best Rodgers-and-Hammerstein show' ever filmed.

Please Murder Me: An idealistic lawyer (Raymond Burr) wins an acquittal for a sexy widow (Angela Lansbury), then learns that she really did kill her husband. What happens next makes this perhaps the year’s most hard-to-believe melodrama. 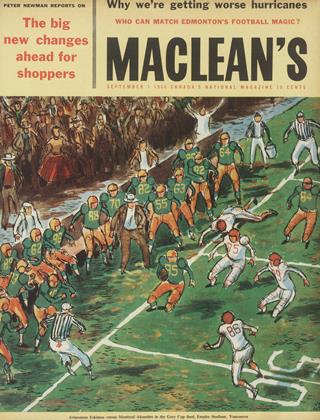