In Hugh MacLennan’s article, It Pays to Pamper Our Children (July 21), I disagree with his statement that only one in a hundred pupils is educable. I say one hundred percent is educable.

A hundred years ago there were no primary schools in Iceland. The land was little known. The few tourists were scholars who had come under the spell of the saga literature. The verdict of these people was that there was no such thing as an illiterate Icelander, that they were all conversant with literature of quality. Such was the reputation of the Icelandic intellect that it was variously ascribed to: diet—fish was said to be brain food; purity of the race—no mixture in a thousand years; they were descended from the aristocracy of Norway. The most convincing explanation was that all Icelanders read and understand sagas, which had the same effect on the Icelandic mind as if every Englishman read and understood Shakespeare.

Although Icelanders were brought to Canada for their literary background, there is little to show today. One Icelander mourned, “They read only what is useful in making money.” That is training rather than education; yet they are the same stock. . . . AMUNDI MAG*

• From Hugh MacLennan’s article; “Suffering does not purify: it degrades. Hardship does not ennoble: it coarsens. Misery does not improve the character: it makes a person concentrate on mean and petty objects (from Somerset M augham).”

From Beverley Baxter’s article (same issue): “Oscar Wilde wrote that out of sorrow have the worlds been built and at the birth of a child or a star there is pain.” Baxter goes on: "Sorrow and suffering can enrich the human spirit and Lois Marshall proves that to be true.”

• I was surprised that MacLennan considers curling an "old man’s game.” In Saskatchewan we have ten thousand junior CURLERS.-LES NICHOLL, PRESIDENT,

Humor in our fiction

Congratulations on your story. When Every Woman Looked Like Regina Lee (July 7). The author not only shows a good sense of humor, but a vivid imagination.— MRS. R. A. HAWKINS, CALGARY.

In your report on rock and roll (What You Don't Need to Know about Rock ’n Roll, July 7), you are very acidy. The way you pick Elvis Presley apart, before you even know him! The way you de-

scribe Bill Haley too! It seems to me you think rock and roll makes juvenile delinquents. If you can’t write good about it, don't write at all!—j. K. RIMELL,

Is the air force obsolete?

II Gen. Guy Simonds really thinks the air force is obsolete (We’re Wasting Millions on an Obsolete Air Force, Aug. 4) then the army and navy should be commanded by curators like any well-run

museum, instead of by generals and admirals. Simonds is a poor student of history if he does not know that air power played the major role in the defeat of Germany and Japan. I doubt if the true force of air power has ever been free from the jealous minds of military and political brass.

The general retreats to science fiction when he conjures up such a vision of guided missiles that do not exist. When and if the age of the guided missile arrives 1 am sure the air forces will not be backward in replacing men with missiles. From a military standpoint the aircraft is a guided missile but men steer it.

I suggest army experts stick to regimental balls and mustache wax and leave the air to airmen.—K. A. BENSON, BRANTTORD, ONT.

Nonsense on our covers

Your cover for July 7 on the photographing of the Fathers of Confederation is the most delicious piece of nonsense I have come across in a long time.—w. P. NVALL. SI. LOUIS, SASK.

• Your cover of July 21 gives a beautiful view of the Capilano suspension bridge, but is spoiled by three young hoodlums throwing paper darts on trees and ledges, creating an eyesore until rain or wind removes them. Mischief can be done in one hour that cannot be undone for a YEAR.-MRS. I ANNY R.

As a Canadian in the United States, I'd like to ask: why won’t Canada grow up? . . . For instance, take the Maclean’s editorial on barring Robeson (Bar-

ring Robeson Helps the Reds). Not content to stick to the subject, you put in a dig about the U. S. handling of the Daily Worker. Then there is Will Dewline Cost Canada its Northland? What would the U. S. want it for?

We came to the U. S. twenty-eight years ago, and in all that time we have never heard any but the most cordial and approving words spoken by Americans about CANADA.-F. W. ALLINGHAM,

On the next Royal Tour

Your editorial, Let’s be Sensible about the Next Royal Tour (Aug. 4), is the best 1 have READ.-MRS. R. M. DAWSON, CALGARY.

• What 1 would like to ask you: aren’t you assuming too much that the Canadians are so keen on seeing the Queen. With due respect to the Queen as a person, her presence on Canadian soil constitutes infringement of our national sovereignty. — CARL ZEIMER, EDMONTON.

How to handle teachers on holiday

I always enjoy Robert Thomas Allen and especially commend his latest, How

to Handle Your Kids in the Holidays. However 1 have a peeve when viewing the problem from the angle of the teaching profession. The object of the two or three months’ holidays is to allow teachers to take further study as well as enjoy a well-deserved rest. I have been a bit disillusioned when I see so many using this period to work in the mills and camps to make money to tide them over the months when no pay cheque is forthcoming. It robs one of the outstanding professions of its dignity. —

A tax for traffic jams

The proposal in your June 23 editorial (How to tame the automobile) for the limiting of automobile traffic in downtown areas has one outstanding drawback. It would be difficult to administer a licensing scheme, as a constant check would have to be maintained on all cars to catch violators.

There is one solution, however, to this difficulty, and that is to discourage downtown parking. This could be done by taxing all parking lots (both public and private) as if they were occupied by buildings of similar structure as the surrounding ones, or by levying a special tax on parking lots. The operators of such lots would then have to pass on these costs to patrons and the increased fee would have the effect of the car tax without its attendant policing problems. Municipal lots would be limited to shorttime parkers only—say. one HOUR.-JOHN 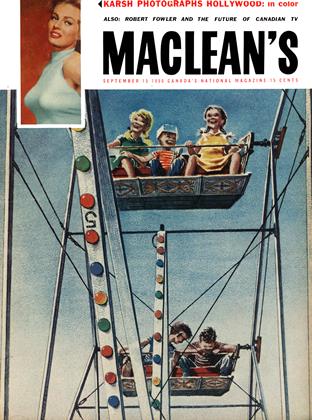