Backstage in the U. S. campaign WITH BLAIR FRASER September 29 1956

Click to View Article Pages
Backstage in the U. S. campaign

Toward the end of the Democratic National Convention in Chicago the followers of Kentucky’s Governor "Happy” Chandler paraded around the convention hall, waving placards such as "Be Lucky, Go Happy” and “Mamie Move Out, Mama Move In.” Before them and behind went seven toothsome drum majorettes and the scarlet-coated brass band of St. Rita's High School, playing in gallant competition with an electric organ that was pumping a different tune through the public-address system. The parade was led by a thin angular man who wore a sunflowershaped hat, a bright red umbrella, white Bermuda shorts, a festoon of cardboard horseshoes and the earmarks of a monumental hangover.

Halfway through the twenty minutes allowed for this ritual James B. Reston, Washington correspondent of the New York Times, emerged from the sweating throng and waved to a Canadian friend.

“Don’t let this turn you into a Fascist, old boy,” he said.

Reston needn’t have worried. To a reporter accustomed to the slategrey sobriety of Canadian politics, an American election campaign is a source of joy and pure envy.

Even to its most delighted observers, though, it is still a bit mystifying. Some American phenomena have swept the world, like Coca-Cola, but the election campaign is strictly a wine of the country. As Windsor, Ont., learns by painful experience every four years, it cannot be exported even across the Detroit River; every attempt at imitation turns out to be tame, self-conscious and tlat.

In its native climate, for some strange'reason, it is just the opposite. From its opening moment, when the Democrats’ imported tenor led in The Star-Spangled Banner and forgot the words, the 1956 campaign like all its predecessors has been authentically, uniquely and bewilderingly American.

The first and hardest thing for the foreigner to grasp is that nobody is being taken in. Like the gambler who. when told he was play-

ing a fixed wheel, replied, "I know, but it’s the only game in town,” the American voter is anything but gullible. He is probably as sophisticated a democrat as any in the world, but he enjoys a show and he enjoys a fight. In an election year he expects his politicians to provide both, and they do — not only between the Democrats and the Republicans but within each party as well.

Hardly anyone, for example, really believed at any time that Governor Averell Harriman of New York had the faintest hope of beating Adlai Stevenson for the Democratic nomination. Few people last fall thought the Ottawa Rough Riders had any chance for the Big Four football title, either. It would have been equally absurd in both cases to suggest that this was a reason to cancel the schedule, or an excuse for making only a half-hearted effort to win.

Backstage in the U. S. campaign continued from page 7

Harriman put on a campaign that must have cost hundreds of thousands, if not millions, of dollars. He rented whole floors in two of C hicago’s largest, most expensive hotels. In one of the gilded salons of the Conrad Hilton a half-hour "documentary” film. The Harriman Story, ran continuously for twelve to fourteen hours a day, often before audiences of two or three people. Fifty Beautiful Girls Fifty (actually fortyeight by my personal count, but I’m sure I must have missed a couple) set out each day with straw hats, bright cotton aprons and large milk buckets full of lapel buttons proclaiming, "Harriman Can Win" and "Harriman's The Man.”

Nobody took this too seriously. It was one of Harriman’s own press agents who suggested that the beautiful dairymaids might be reinforced by a platoon of pregnant women carrying placards announcing "Harriman’s The Man.” But even though they kept their sense of humor, the Harriman forces fought as hard as if their man had had a real chance of winning, and as if his fellow Democrat Adlai Stevenson were a Republican.

Harriman's personal contribution was a feat of physical endurance for a man of sixty-four: a fortnight of eighteento twenty-hour days solidly tilled with greeting and speechmaking, canvassing and cajoling. One afternoon he and his wife shook hands with a crowd the newspapers estimated at five thousand. It took them nearly three hours, but at the end they were still smiling brighth and wringing each hand with the same cordial firmness.

Adlai Stevenson, eight years younger and buoyed up by confidence of victory, had a somewhat easier time at the convention alone, but what was a sprint for Harriman was for Stevenson the first lap of a marathon. Any campaign is a physical ordeal, especially in the United States, but this year the Democrats arc putting their man through a schedule deliberately planned to be grueling. They want to point up every possible contrast between a candidate who is fit and a recent convalescent; Stevenson’s feats of whistle-stop campaigning must be such as would kill any heart patient.

At the very beginning of the race Stevenson was already grey with fatigue, but he gave no sign of minding it. At two in the morning, after his acceptance speech and a triumphal tour of various celebrations of his supporters, he was still relaxed and urbane, chatting easily with one group after another, calling by name even very young and obscure members of the Stevenson team. And when he left the last victory party it was still not for bed but for another meeting, to lay plans for the morrow and the long weeks ahead. Whatever else it may be. an American election campaign is certainly a proof of stamina.

Is it a proof of anything else? Does it alter or even expound the real political situation in the country or the world?

For the campaign as a whole the answer is probably no, in the United States as in other democracies. But for those truly unique assemblies that are the starting point of every presidential campaign—the national conventions— the answer is yes. In spite of all the hoopla and hullabaloo these gatherings mean a great deal.

The candidate himself was a foregone conclusion in both parties, but the manner of choosing him was not. The Democrats in particular went into their convention beset with unanswered questions, and much depended on what answers came out.

In the presidential race the question was not who would get the nomination. but who would have the credit of getting it for him. It was a contest of kingmakers, and also a contest betw'een Stevenson himself and each of the kingmakers in turn. Stevenson won.

Unlike Harry S. Truman, whose personal vanity led him to back the wrong horse, the realists in all factions ot the Democratic Party had no illusions about who the candidate would be. Their hope was to make Stevenson believe he couldn't win without their support, and to exact some price for it.

Stevenson gave them all a cordial friendly hearing. He did not. as he might have done four years ago. go out of his way to draw attention to his disagreement with anybody, but neither did he promise anybody anything. He knew, just as well as any of his hardheaded visitors, that none of them had anywhere else to go. and that eventually he would get for nothing the support that each was trying hopefully to sell.

Southerners had no choice because the only conceivable alternative was Averell Harriman. and Harriman's whole case against Stevenson was the charge that Stevenson was too "moderate" about such southern bugaboos as civil rights for Negroes. They had already tried the threat of bolting into a minority third party such as Strom Thurmond’s Dixiecrats of 1948; till it got them was a grave risk of losing the seniority rights that enable southerners to dominate key committees whenever the Democratic Party organizes congress. Georgia made a defiant gesture against Stevenson by nominating a totally unheard-of congressman named James E. Davis tor president, but the Georgians were not being naïve, they were being sarcastic when they touted him with the placard: "The Lord Save Us, With James E. Davis.”

But if southern reactionaries had nowhere else to go. neither had northern liberals. Harriman was running on an ultraliberal ticket, but even in his own New York State such liberal leaders as Senator Herbert Lehman were Stevenson men. Not only had Harriman no support in the south, he had virtually no support at till outside New York. The real core of the Harriman faction was not the extreme left wing of the Democratic Party, but Tammany Hall and its soft-spoken, hard-boiled boss Carmine de Sapio.

What was true of the presidential race was also true, but in smaller degree, of the battle over the Democratic Party platform. Most of it, ol course, was a melange of empty promises stitched together to please this, that and the other pressure group. But one plank that couldn’t escape the most rigorous public scrutiny w'as the plank on civil rights, which contains the heart of the quarrel between north and south. Republicans could afford to ignore this conflict, since they have no strength in the deep south worth considering, but the Democrats in this crucial respect represent the nation.

Their problem was no mere collision of doctrinaire idealists. Democrats are realists about the election as well as about the convention. They have very little hope that Adlai Stevenson can beat Dwight D. Eisenhower. What they do hope, with good reason, is that Democrats will again elect a majority in both houses of congress.

To do that they must, of course, carry the Solid South. But they must also carry the big industrial cities of the north, where the Negro vote grows stronger by hundreds and thousands every day. The problem was to construct a platform that would win the acquiescence, if not the enthusiasm, of both these contradictory factions.

In spite of the calculated shrieks from liberal ranks, the faction on the defensive was the south, and it was the south that made most of the concessions. Southerners wanted a platform that wouldn’t even mention the Supreme Court decision against segregated schools. I’he adopted platform not only mentions it. but accepts it as the law of the land. Nothing is omitted except the explicit pledge to enforce the Supreme Court ruling. although that too is clearly implied.

If this represented a victory for the northern liberals it wouldn't mean much —the south has repudiated its own party platform for two elections running, and undoubtedly will do so again. The significant thing at Chicago was that the civil-rights plank was the work of socalled moderates on both sides. The south, except for such hopeless backwaters as Mississippi and South Carolina. seemed to accept the equality of all citizens as inevitable-—a concession that even the Civil War did not exact.

Words are not deeds. Nobody "at Chicago was so fatuous as to think that the Democratic convention had achieved a workable compromise in practice of a controversy older than the republic itself. What the convention did show was that the south is fighting a losing battle, and that southerners know it. ★ 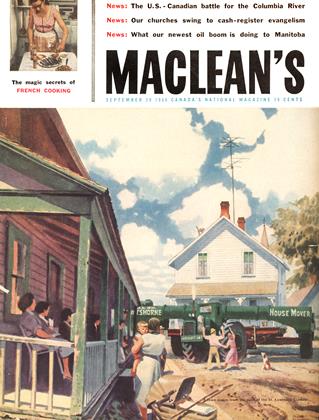