The long propaganda war that followed the short shooting war in the Middle East contains a moral for censors: truth may be painful but it pays in the end.

Nobody out here seems to have followed that precept. People are so mired in misinformation that discussion is almost impossible — no two countries have the same set of "facts.” Deliberately or not they're all nourished on fantasy.

One example is the dispute over casualties in Port Said. I asked the British colonel in charge of information there for the official estimate of Egyptians killed. He lookcd a bit embarrassed — said he didn't know that there was an official figure but he thought about a hundred had been killed, maybe a hundred and fifty. I then remembered the Eden government's statement to the House of Commons, estimating casualties at a hundred dead, 540 wounded.

British correspondents who went in after the landing, when the bodies were still unburied, guessed there were two thousand piled in the cemetery at the edge of town. UN observers haven't yet had a chance to make a full enquiry but they think the reporters’ guess was high. Their own preliminary estimate is a thousand dead—but that is ten times the Eden government’s figure.

This disparity would have been a major propaganda defeat for Britain if Egypt had let it alone.

Instead, the Egyptian press has been full of the wildest stories about the “atrocities” in Port Said. People here believe at least five thousand civilians were killed and sixty thousand are homeless, that sporadic fighting and outrages continued for weeks after the cease fire, and that a quarter or more of Port Said was leveled by shelling and bombing.

Any casual visitor to Port Said can see that this is nonsense. Merchants were conducting a brisk trade in souvenirs with the occupying troops. Most of the city is intact. There’s an area in the eentre flattened by bombs, considerable damage near the waterfront and a block of shanty-town slums completely destroyed by fire. But the contrast between what was said and what is seen tempts the visitor to think of the actual damage as trilling—which, of course, it isn’t.

Another Kilkenny-cat operation in propaganda warfare followed Israel’s capture of the Gaza Strip.

111-advisedly, the Israeli made no mention of civilian casualties in the Gaza refugee camps after the territory had been surrendered. It wasn’t until mid-November that reporters learned from United Nations observers that quite a few people had been killed in a disturbance at Rafah camp, at the south end of the Gaza Strip.

Just how many were killed is still an open question. The UN people who first told the story thought about fifty were dead. The military governor of Gaza, summoned to a hasty though belated press conference in Tel Aviv, said ten had been killed and about twenty-five wounded. Later the UN held a quiet survey to gather names and former addresses of the refugees who had died—when I talked to them they had completed their check of only three out of twenty-four blocks of dwellings—and already they had a list of twenty-nine names.

However, everybody agreed that the Rafah incident had been a riot. Israeli guards had been withdrawn, by some error, several hours before their replacements arrived at Rafah, and the refugees jumped to the conclusion that the Israeli were pulling out of Sinai. By way of celebration they started to loot the warehouse in the camp. Just as festivities were well begun, the replacement guards arrived. and they dispersed the mob with gunfire. UN people who were there thought they were more severe than they needed to be, but at least there was a violent outbreak to be quelled.

If the riot and its result had been announced when it happened, nobody would have paid much attention. As it was, correspondents began to root around Gaza for the facts on civilian casualties, and they came up with some very sad stories.

I spent the better part of a day in a hospital in Gaza, interviewing civilians who had been shot. One was a thirtythree-year-old teacher from a secondary school in the refugee camp at Khan Yunis (where no riots or other disturbances took place). Here is his story as I noted it down:

"At seven o’clock in the morning six soldiers came into my house. I was there with my wife and children, my two brothers and my mother. It was my mother who opened the door. The soldiers came in and asked her if any Egyptians were hiding here. She said ‘There’s nobody here but my sons.’

“They told us to come out. I went out with my hands above my head, saying over and over ‘I am a teacher, not a soldier.’ They said ‘Stand,’ and then they shot me in my right arm with a machine gun.”

He held up the stump of his arm, amputated just above the elbow.

"Ihey shot my brother i^lso, who was twenty-four, and he died. My little brother, only fourteen, was shot in the leg but not badly hurt. He is here in the hospital with me.”

I saw about a dozen such men that day, and they all told the same kind of story—shot without warning or provocation, they said, while they marched to the school house for a “security screening” or waited at home during the houseto-house search for arms. In only one case was there a witness to confirm their stories—a UN observer had actually seen one man shot down as he stood against a wall. Most had no confirming evidence but their own terror and distress, but that was enough to make the American doctors and nurses believe them.

“No ‘Egyptian Jews” have been expelled, says Cairo. The catch: only about 4,000 have citizenship”

I came away from Gaza feeling pretty ill. But I see by the Cairo newspaper this morning a reference, by an Arab refugee spokesman at the United Nations, to news reports of 1.250 killed and 3.000 arrested in the Gaza Strip. The effect, on anyone who has been to Gaza since the war, is an urge to explain that these alleged reports are vast exaggerations. You end up half-defending the very thing that most appalled you.

But to realize the full impact of misinformation out here you have to know too about the trivialities, the little incredibles. 1 came in on the plane from Damascus with a young, intelligent Lebanese who assured me that the Sinai campaign had been won by French and British troops mingling with the Israeli.

"For every four Jews in the line, there was one Frenchman or Englishman," he said. “The Jews by themselves would have been nothing.”

To boil in oil or tar ’n' feather.

derstood battle orders given by unknown commanders in an unknown tongue.

All the Arab countries have prominently featured Syria’s charge that Israeli. French and British troops were massing on the frontiers between Israel on the one hand. Syria and Jordan on the other. The first day this charge was made, Israel asked United Nations observers to go up and see for themselves. The next day they took a busload of foreign correspondents. Neither party, needless to say. found anything at all in a thorough tour of the area. If their report has been carried in any newspaper in an Arab country, I have missed it.

Last week an American reporter here was asked for a summary of what had happened to the Jewish community in Egypt. He is a very thorough, conscientious man, and I happen to know his private opinion that Egyptian policy toward the fifty thousand Jews here has been pretty moderate in the circumstances. Less than ten percent have been ordered or intimidated into leaving the country (without, of course, being allowed to take their assets with them).

But the official version is that no "Egyptian Jews” have been expelled. (The catch is that only about four thousand have Egyptian nationality; the ones expelled, even though they may have lived here all their lives, arc technically foreigners.) So my friend's careful, moderate. balanced and accurate report was stopped by the censor. His magazine therefore picked up a story in London, from the first batch of expelled persons to arrive from Egypt.

All this, after a time, gives to the reporters who live here a feeling of being stilled. Talking to one the other day, I

said something about trying to find out some background facts.

"Facts?” he said. “Man. it’s so long since I have found a fact that I wouldn’t know what it looked like.”

On the news published within Egypt censorship is complete. A censor sits in every newspaper office and reads every line of copy before it is printed. On the positive side, publishers have periodic

conferences with the government on the way the news ought to be played.

But the outgoing censorship, of course, is all the more absurd for being less than half effective. Among the horde of traveling reporters who have been here in recent weeks, most sent only about two stories out of five by direct cable from Cairo. The other three went out in the coat pocket of some departing

friend, to be cabled home from somewhere in Europe.

This particular article, though, is going through censorship here. 1 shall be interested to see. when I get home, how much of it got into the magazine. ★

I This article, airmailed from Cairo, was passed without change by Egyptian censors.—Ed.) 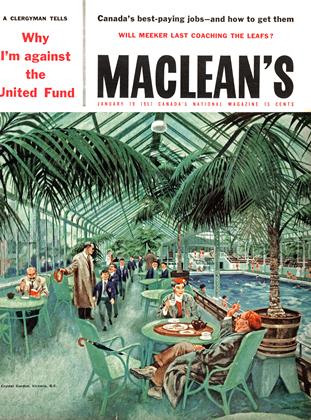