My most memorable meal: No. 12

Click to View Article Pages
My most memorable meal: No. 12

My most memorable meal: No. 12

There were four of us who messed together at Luckenwald prison camp, and we were hungrier than we had ever been in that spring of 1945, because Red Cross parcels couldn’t get through on the wellbombed railways. We talked and dreamed of food, and that first enormous meal in the freedom that was coming. Yet my most memorable meal came before freedom, and was made from prison-camp ingredients. We were celebrating a birthday or something, so we went flat out to prepare a feast. We had potatoes which we mashed and creamed with powdered milk, but, to add that extra touch, I made a gravy by browning some flour, a rare delicacy obtained in trade, in margarine, and stirring in water and salt (there was no pepper). The result was smooth and thick and it did something for the eternal potatoes. It caused an argument, though, for Paget, who was Eton and Oxford, said it wasn't gravy but sauce, since it hadn't been broiled out of an animal. Gravy in such a context was non-U. But the great event was the

pudding, fashioned by J. Ewart Prudham, now deputy treasurer of Scarborough Township. He directed our efforts as we tore immense quantities — about sixteen thin slices—of black bread into minute fragments. Cutting it wouldn’t get the proper effect. Then he tore up some longhoarded Red Cross prunes and raisins, and shredded one heavensent carrot into the mass, bundled it in a ball and wrapped it in some sort of oiled paper. When it was steamed over our homemade chip stove, which burned bits of bed-boards whittled off with a dull table knife, the pudding swelled to an enormous size and took on a rich, fruity flavor. Finally we had a sauce, not a gravy, for the pudding. Harry Bastable, an immense Winnipeg Irishman, grated an American D-ration chocolate bar into powdered milk and creamed it with tender care. Potatoes and gra—beg pardon, sauce—and chocolate-coated pudding. washed down with genuine powdered coffee—that, for some reason, is the meal I remember, more than any of the steaks and plum puddings I have eaten since. 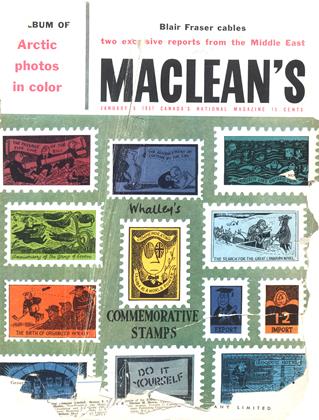