My most memorable meal: No. 31

Click to View Article Pages
My most memorable meal: No. 31

My most memorable meal: No. 31

Being the son of a Frenchman and a chef, memorable meals tend to cloud all my recollections of food with the same bright haze of pleasure and satisfaction. I can remember a chicken stuffed with olives and nuts in a moonstruck garden in Spain when I was seven; later, in France, a saddle of venison that had been meticulously saturated with wine and herbs for weeks beforehand by means of a hypodermic needle; and not long ago I sat down to truite an bleue that I had caught myself from a large green aquarium in the kitchen of Boulestin’s, just off The Strand in London. But for sheer dramatic artistry. in conception and execution, one particular repast literally towers above all the others.

On a brief visit to New York my father took me to meet Gabriel Lugot, the executive chef of the Waldorf Astoria. Our arrival was apparently unexpected, but I soon realized that this gaunt pale Swiss was a master of the impromptu. We drank Pernod in his little caged-in office in the fifth-floor kitchen, and soon after he had issued a few brief orders to his staff, a chef came in to set a small table for three. The pop of a wine cork inaugurated the proceedings, which began with a finely seasoned fish soup. After the first flush of compliments, M. Lugot asked me very kindly whether I intended to follow my father's profession. I shook my head, and my father answered somewhat disparagingly, “Unhappily, no. He wishes rather to be a journalist.”

“But that is wonderful,” said Lugot warmly. “Votre fils, he has a rich and honorable tradition behind him. Boulestin began his career as a writer for the Paris periodicals, and Curnonsky rose from humble beginnings as a journalist in the provinces to become the Prince des Gastronomes. Non, I assure you, Ferry, your son's choice is most logical.”

My father grudgingly conceded that this was possible. M. Lugot smiled, wiped his mouth and abruptly got up. to be joined at the door by my father. Mystified, I followed them through the organized bedlam of rushins: white fmires

and red faces. Lugot buzzed for the service elevator and began to discourse on Balzac, Victor Hugo, Rabelais and Anatole France, and the consuming lust for good and plentiful food that involved them in a glorious cycle: write well to eat well, eat well to live well and write well . . . We stepped out into the fragrant hell of the seventhfloor kitchen and walked to the office of another chef. There, at a table already set, we sat down and continued talking over succulent portions of roast chicken with tiny mushroom-smothered sausages, and a bottle of Puilly-Fuisse—all served by energetic, purple-cheeked sons-chefs who wore on their flushed faces fixed expressions of acute pleasure.

And each course thereafter — a blood-red steak an poivre aflame with brandy and surrounded by Dauphine potatoes and fried endive, later a tossed Greek salad with black olives and thyme, and fruit (each course accompanied by a wine made distinctive because of its body, aroma and province of origin)—we sampled the menu in similar little cubicles off the kitchens on the twelfth, seventeenth and twenty-third floors.

All the while we discussed the relationship between good food and good writing, a relationship documented to the point of extreme erudition by M. Lugot’s civilized and witty conversation. I began to lose track of our ascent after facing a mountain of fifty different cheeses that turned on circular trays for easier selection, and what seemed like a laundry hamper full of crusty brown baguettes.

In the staff lounge we had coffee, brandy and cigars (which, being sixteen, I reluctantly declined), and I remember looking at my watch. We had been eating and talking for four hours, climbing to the summit of this gastronomic Olympus where, looking out of a window, we were on a level with a sweep of clouds over the Manhattan skyline.

It seemed to me then, as I shook hands with Gabriel Lugot. that next to writing, cooking was the most honorable and rewarding profession in the world.

THE ENGLISH-BORN SON OF A FRENCH CHEF, ANTONY FERRY IS A SHORT-STORY WRITER AND TV PLAYWRIGHT NOW LIVING IN CANADA. 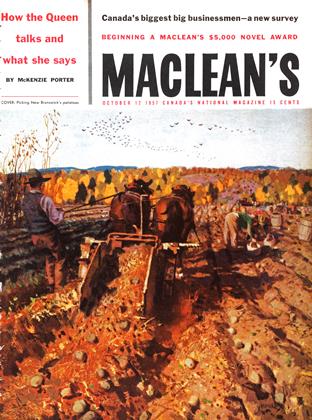