BEST BET LES GIRLS: Three cancan dancers in Paris (Mitzi Gaynor, Kay Kendall, Taina Elg) unofficially represent the United States, Britain and France in the frothy goings-on which help make this one of the year's finest and funniest musicals. M-G-M didn't use much more than the title of the popular book of memoirs written by Constance Tomkinson, daughter of a Nova Scotia clergyman. The results nonetheless are full of charm and sparkle, and Cole Porter's songs are worthy of his name. Gene Kelly is the genial but bewildered dancer-showman who tries to straighten out the girls' romantic complexities. CHICAGO CONFIDENTIAL: Pretending to "expose" labor-union racketeer ing as a sort of red-hot footnote to some of the recent headlines, this turns out to be just another routine cops-and-robbers melodrama.

FORTY GUNS: Barbara Stanwyck is a high-ridin’ woman with a whip again, in a western so portentous and overblown that it somehow seems twice as long as its seventy-six minutes. With Barry Sullivan, Dean Jagger.

MY GUN IS QUICK: Author Mickey Spillane’s copyrighted blend of sex, brutality and mystery is even less impressive than usual in this cluttered story, although Robert Bray does reasonably well as Mike Hammer, the bloodshot private eye.

OPERATION MAD BALL: This fast and lively army comedy deserves a further commendation here, despite a few rather gruesome bits in a morgue. Jack Lemmon, Kathryn Grant and TV’s Ernie Kovacs are amusingly on hand.

THE PASSIONATE STRANGER: Sir Ralph Richardson and Margaret Leighton make more than the most of their scant opportunities in this coy British comedy, which has a story-within-a-story (in color) as its central gimmick.

The Shiralee: Adventure and drama in 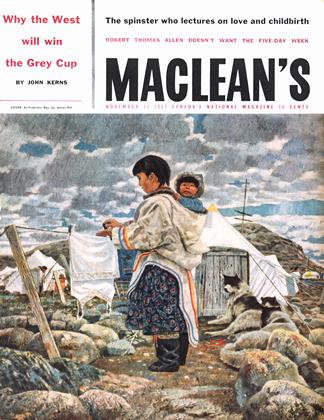