Love in the afternoon November 9 1957

One balmy early-fall day a chap who works high up in the Canada Life building on Toronto’s University Avenue stared out the window after lunch in the employees’ restaurant, wondering whether to go for a noon-hour stroll. Far below he recognized a friend of his, and looked again because this bachelor acquaintance was strolling down the midavenue boulevard hand in hand with a girl. As the fellow upstairs watched, good old Charlie doffed his jacket like Sir Walter Raleigh and spread it on the grass for his girl friend to sit on. Then, eyes popping, he saw Charlie pop a ring on the girl’s finger and the two of them go into a clinch as the traffic roared by unheeding on either side of them. And they were the most surprised couple in Toronto when Charlie’s pal came bounding through the traffic a moment later shouting, “Let me be the very first to congratulate you!”

Parade’s citation for the calmest and most resourceful mother of the month goes to the Winnipeg woman whose young toddler locked himself in the bathroom. Did she panic? No. She just passed cookies under the door, then fed him a glass of chocolate milk through a straw through the keyhole, then shoved a comic book after the cookies, until finally dad came home to effect a rescue.

In the dying moments of a recent football game in Winnipeg the timekeeper raised his pistol in the air, then fired— and down Hopped a wild duck, just like in the cartoons. The most startled person in the stadium was the timekeeper

and the most overjoyed was the sport in the stands who had just returned from the northern marshes with a full bag and a nice sense of timing.

Peaceful Sunday afternoon drives seldom end that way so this Prince Rupert, B. C., motorist only winced resignedly when a tire let go with a loud bang, and pulled into the curb. Inspection of all

four tires, unpunctured, left him scratching his head. When his wife said, “Come on, it was probably a truck back-firing,” he remained unconvinced—to an experienced ear a blow-out sounds just like a blow-out. He was right, too, as he dis-

covered when he opened his trunk and showed his unbelieving wife the tattered spare.

The tight-money policy may have cut into house sales in Vancouver but it hasn’t yet left real-estate agents penniless. A salesman who was on duty recently at a home advertised as “open for inspection” gave the full treatment to one couple who showed up to see the place, but as the tour concluded the husband muttered apologetically, “Thanks a lot but we're really just looking around.” Then he shoved a quarter tip into the salesman’s palm and departed.

Parade scouts all over Alberta are keeping us posted on the reactions of the local citizenry to the Social Credit government’s $20-per-capita oil dividends. One man in Devon, heart of the oil country, was chagrined to discover that when you do collect money from one government another is waiting to take it away from you. He decided to invest his money in a new pair of glasses and drove into Edmonton for the purpose, but when he returned from the optician’s he discovered the capital city had tagged him for a five-dollar parking charge.

Meanwhile, in Leduc another Albertan had a bad moment when he thought he’d waited too long to get in line for his dividend. When he enquired of a young woman bank clerk, “Where do I collect my twenty dollars Social Credit money? she replied, “I’m sorry but we haven’t any left.” Hustling over to talk to the accountant he discovered to his relief it was merely application forms the bank was out of, with more due in any day. ★ 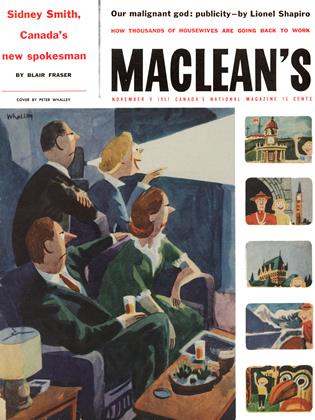