So you have broken out again in a new place — I refer to your observations about Little Rock in your Nov. 9 editorial. I suggest you would be more in order commenting upon the school segregation at home (Roman Catholic and Protestant) rather than intruding upon the domestic affairs of a foreign country.—W. I. W. BULLOCK, LANGFORD, B.C.

* As one born and educated in the U. S. and fully aware of the complications of this vexing question, I was gratified to know that a Canadian has got to the heart of the question in such a masterly MANNER.-M. R. YOUNG, VANCOUVER.

How much is a photographer worth?

Hell’s bells—as a photographer. John deVisser is worth his weight in gold any

Canada’s Biggest Big Businessmen (Oct. 12) by Peter C. Newman is interesting, but the only conclusion I can make is that Canada’s “free enterprise” system is anything but free. When the expansion programs of some companies mean taking over their competitors then there is something lacking in Canada’s anti-monopoly laws. When directors are allowed to sit on boards by only buying a dollar's worth of stock then certainly the spirit of the law is being violated if not the letter. Either Canada must be lacking or not enforcing its monopoly laws to allow such conditions to EXIST.-J. VERNON REED,

I was interested in your article. We’re Being Bullied by the Christians (Sept. 14), by Robert Brockway. There are thousands like me who have bit into the apple of organized religion and found a worm and after tasting the first sweetness have had to throw it away. Like thousands of other poor mixed-up Canadians I flee from chaos and indecision to a simple faith in God and the acceptance of the word of Jesus Christ.

And let me state that most preachers and churches have the gimme's—gimme this, gimme the other, mostly to build a bigger and more imposing church.—

** Dr. Brockway may be mistaken in who is doing the bullying. Jesus Christ spake to multitudes of people, yet there is no record of Jesus or the apostles demanding that anyone else stay and lis-

ten. So anyone using coercion or restraint in this manner would not be following the example of CHRIST.-FREU J. BLACKIE, SOUTH GILLIES, ONT.

^ The Christian churches and heterogeneous sects don’t seem to be aware that, thanks to the good sense and foresight of the men who built Canada, this is not a Christian country though the churches are doing their best to make it appear so. Think of the effrontery and gall of the Lord's Day Alliance in crowding their pagan and narrow-minded views down our throats regardless of the British North America Act and the laws of Canada. In Canada all religions are the same before the law.— w. R. JANES, PARRSBORO, N.S.

Down with the Dance

The Dance of the Bells (Sept. 28) is rather REVOLTING!-MRS. CATHLEEN D. MACAULAY, CYRVILLE, ONT.

Somebody must have changed

I used to have a subscription to Maclean’s but it gradually became repellent, not to say repulsive. Did I change or was there a change of editors? But you always have good old Bax. If you drop him, I won’t even borrow your magazine and then you really will feel the

* Frank Croft’s story made me ponder just why the youth of Canada have to be fed on synthetic heroes when there are in our own archives authentic stories that pale into insignificance the so-called frontier taies. Let’s start to bring our

own pioneers out of the misty past and give them a belated honor they so well DESERVE.-J. B. WIGNALL, HAMILTON.

One fact not brought out is that David Thompson was not an Englishman. His Welsh ancestry probably explains his religious zeal and also the gift of being a good STORY-TELLER-MRS.

The Miramichi was a mirage

Give Baxter correct marks for his remarks (Nov. 9) on the most beautiful 100 miles of river on this continent, the St. John River between Fredericton and Saint John, but give him 500 lines for calling it the Miramichi, also beautiful.—FLOYD FARLEY, CHARLOTTETOWN. P.E.I.

^ Escapes from marriage u* Let’s shame speeders ¿>That fascinating serial

I agree with Dr. Langmead Casserley that divorce is wrong (Oct. 26). But primarily divorce laws should provide an escape from an unsuitable spouse. Cruelty, desertion, drunkenness, irresponsibility, incurable insanity, and habitual crime should have more weight than adultery as grounds. Couples who just can't get along with each other should not be punished for life for making a poor choice. There should be an escape other than hoodwinking the law. I he objective in framing a divorce law should be to provide an escape from an intolerable marriage without making it too easy for the imperfect but tolerable marriage to break

^ Dr. Casserley says, “When there was less divorce there was more adultery.” With more divorce today there is growing promiscuity at ever-younger ages. We have thrown out our moral code, we stampede through life like cattle. Someone is bound to be injured. Maybe, as Dr. Casserley suggests, we’ll get tired of it and return to more intelligent ways.—

^ Would Dr. Casserley hold a man and woman together if he knows that they hold no love for each other, but throw indignities at each other, sometimes in the presence of children? Would he hold them to bring more children into such conditions? Would not divorce be the best solution to an unhappy soul—and sometimes body—destroying marriage?—

^ If married women would stay at home and look after the place they call “home” we would have less senior delinquency and the divorce courts would not be working overtime. There’s an old saying, “A man’s home is his castle.” Now it’s the cocktail BAR.-MAY A. WILLOX, PRINCE ALBERT, SASK.

Then found he was wed to a shrew; There was no divorce Or other recourse,

So he twisted her neck all askew.

The moral above then is plain:

If seeking divorce is in vain;

As said at the start Til death do us part:

You're free at the moment she’s slain.

“Not only drivers are sick”

Your editorial (Oct. 26) says: Let’s Get the Sick Drivers off the Road. Have you considered the sickness of others? Auto manufacturers must be sick or they would not build cars that go 120 mph. Then let us consider motor-vehicle licenses and laws. If it is breaking the

^ Why don’t we fight speeders with the most powerful weapon in our society-— social disapproval? Why not label the car of a first-time speeder with a large “S” above the license plate, to be displayed for, say. one month? An incorrigible speeder would be forced to have his car governed at his own expense so that it could not exceed the legal speed limit. His car would be branded with a large “G," then the knight errant who loves to push his car to the limit would be shamed by a sign informing the world that his charger is not a blood stallion but a mild GELDING.-N. K. SHERMAN, KINGSTON, ONT.

Hric Hutton's recent piece on what kind of TV we're going to have seems to suggest Canadian TV is shot. Your French people have an expression ~~ c’e.st à rire. Hutton says most TV viewers within reach of American TV prefer programs from the south. That has not been my experience. Neither he nor anyone else writing from Canada has made any reference to the fact that many viewers here keep their dials on Toronto, Kingston and Ottawa. And they do so in spite of the fact the pictures are not as clear as those from Watertown, Syracuse, Utica, Rochester.

You state the Mounties are “going on the air” (Preview, Oct. 26) with a 39part series. It will be difficult to present. Some years ago radio presented a series of Mountie dramas. In one Dr. George Kerby was portrayed confronting the condemned murderer of Tucker Peach in a wordy profound bass. To those who knew the doctor it was ludicrous, for he had an eerie falsetto.— ,j. EDWARD HUM-

A vote for ghost patrols

I approve of ghost patrols (Backstage with Furtive Traffic Police, Oct. 26) to aid police in catching traffic offenders. There aie too many reckless drivers who take extreme risks, violate all laws because they don't see anybody around to stop them.—w. KRINKE, SWIFT CURRENT,

Was it necessary for Maclean's to fall prey to reminiscences of Hitler (What I remember of Hitler, Oct. 26)?

For the past decade we have been punished by former Nazis of all stripes who claim to have known Hitler and have bored us with explanations of the why and wherefore of Nazism. To top it all you now come along. Really! — A. AVERBACH, VANCOUVER, if 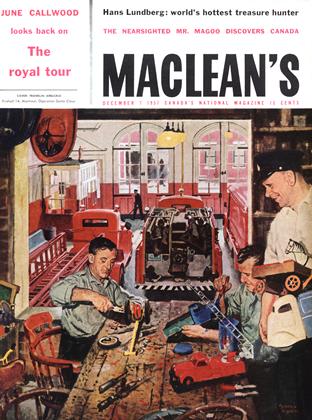