Written 150 years ago by a Hungarian Aesop, they bespeak the gentle wisdom, wry humor and hard realism of an embattled people

Once upon a time there was an eastern potentate who deemed himself happy in the possession of two friends. So greatly did he prize his happiness that he was about to raise a monument to Friendship when hostile forces broke into his realm and, having ravaged the land to their hearts’ content, carried him off in chains. The king did not lose courage, for he was sustained in his captivity by his faith in the sacred ties of friendship.

“My friends are alive and they will rescue me,” he told himself, and waited in all patience for the hour of his deliverance.

But what did his friends do meanwhile? Did they collect an army to deliver their king? Did they offer up their treasures for his ransom? Did they lay their services at the feet of the sorrowing young queen? Alas, they did none of these things. One of them, whom the king had raised to high office, possessed himself of all his remaining treasure; the other, a youth of handsome presence, stole the love of his queen.

Long afterward the king escaped from captivity and returned to his throne. And he set up, as he had intended, the monument to Friendship. What, you will ask, was the monument made of? You could never guess, so I will whisper it to you. It was made of salt! For salt, he said, is firm and shining when the weather is fine, but turns dull and dank at the least threat of rain.

Zephyr, in tender dalliance with a rosebud, bent back its scented petals one by one. “How sweet and enjoyable must be my brother Zephyr’s game with the Queen of Flowers,” rumbled the North Wind to himself. “Why shouldn’t I experience an equal pleasure? What felicity to know oneself the cause of a tender rosebud’s awakening!”

And he swept up to a laden rosebush and began to lavish his caresses on the youngest and sweetest bud. But it paled and shriveled under his touch and soon had pined away.

I never see a young girl by the side of an aged satyr of a husband but I must think of the north wind and a budding rose.

The White Cock and the Red Cock were sworn enemies and they split the entire farmyard into two factions. There were fights over every grain of corn and every shady nook; high words, sneering innuendo, slanderous aspersions and hot altercations were the order of the day. The stork looked on in wonder from his high perch on the barn roof.

“My friend,” he said to the duck, “will you tell me what is the subject of your quarrel? Have you, perhaps, different notions as to the best way of averting for ever all danger from weasel, hawk or fox?”

“Oh, no,” answered the duck, “it is a much more important question which divides us, namely, the question of which can crow loudest, the Red Cock or the White.”

“You fools,” said the stork, “I’ll tell you what. There’s a week-old owlet in an owl’s nest not far off. Go and lay the matter before him; it will not take him a minute to decide the matter for you.”

There was once a Greek youth who made fervent prayer to Hymen to give him a young, beautiful and wealthy wife.

"And what,” asked Hymen, “have you yourself to offer in exchange for all these gifts?”

“A loving heart,” answered the youth.

“Are you not somewhat unfair,” asked Hymen, “to set so high a value on what you do not deem worth seeking in your mate?"

“Let me but have a wife possessing the three • qualities 1 mentioned,” replied the youth, “and I shall do very well without a loving heart. ’

“For my part,” said Hymen, "1 am willing to give you what you desire. But 1 rather fear the vengeance of that naughty boy. young Cupid, if we leave him out of the transaction, for he has more than once before this confounded my nuptial arrangements. I will tell you what you can do. Promise to give him. by way of expiation, a few drops of your blood every day. and I will give you the young, beautiful and wealthy wife you desire.”

A few drops of blood? Why. who could grudge them in return for a wife of such excellent qualities! thought the youth in his lusty pride; and he concluded the bargain and carried home the woman his prayers had gained for him. But soon he began to grow wan and pale, and then he began to wither, until, wasted to a mere shadow, he sank into an early grave.

Unhappy youth, what have you done? From that day on to this. Cupid has taken the life blood, drop by drop, of all who have married without his aid, choosing their wives for their beauty, youth and wealth alone.

“How can you chirp so merrily, you frivolous creature?” said the mouse to the cricket as they met at the edge of the stubble field. “The summer is nearing its end: doesn't it occur to you that any day now the cold and dreary winter may be upon you?”

"I'm glad you reminded me,” answered the cricket. "I'll have to be twice as merry so as to be sure that I'm using every minute. Shall I let my spirits be darkened by cowardly doubts and the trembling fear of what the morrow may bring? Shall I let anxiety deprive me of my dearest pleasures? No, a thousand times no! Those pleasures shall not slip unenjoyed into the everlasting void. I shall revel in them doubly in the knowledge of the doubtful future, whether it takes them from me for ever or restores them to me some day.”

Pygmalion was on his knees before his adored statue, (invoking it with all the passion of his frenzied love. In vain! The beautiful marble remained insensible to his entreaties.

"Try flattering her instead of pleading,’’ advised a passing friend.

Pygmalion took the advice and poured forth a torrent of praise of his mistress' charms; he praised her slender eyebrows, her finely chiseled nose, her flashing eyes, her lovely figure and small round breasts. And. lo. the statue warmed to life, became.tender woman and looked down with heavenly kindness on her kneeling slave. But—the first breath she drew was a sigh.

"Rise. Pygmalion,” she said. "I know very well that you men are only our slaves so long as we lend a deaf ear to your solicitations. What are the flatteries you have lavished upon me but praise of your own handiwork? It is yourself that you love in me, and your own will that you impose on my weakness when you place me on a pedestal above you.” 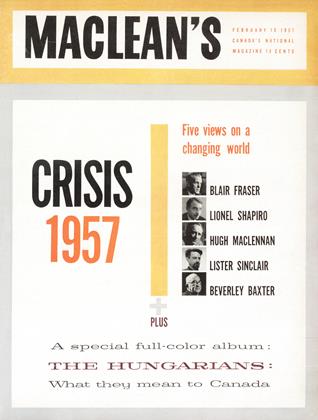