Backstage IN THE MIDDLE EAST

How I was arrested in Egypt BLAIR FRASER February 2 1957

Click to View Article Pages
Backstage IN THE MIDDLE EAST

Backstage IN THE MIDDLE EAST

Dispatches from Egypt often mention people being put under “house arrest,” as the first president of the Egyptian republic has been for the past two years. I never before had a clear idea what this penalty is like, but I know now. I found out about it one afternoon in the Nile Delta, in the course of which I was arrested myself for a short while.

Mac Dale, Canadian trade commissioner in Cairo, had arranged for us to go out to a small village with a Jesuit missionary whom I’ll call Father Joseph. As we set off Father Joseph explained why he had to make this fifty-mile journey.

“My teacher out there is a timid fellow,” he said in a voice like a bugle. “The government closed our school and sealed up the doors, and I am sure they will never get around to removing them. Never. But my teacher, silly fellow, is afraid to open the doors, so 1 must go out myself to tear olf the seals for him and open the school.”

Once we got there the operation took only ten minutes. Father Joseph marched around from door to door, ripping off official and impressive-looking seals of the Egyptian government and throwing them in the ash can. Then after making a brief tour of the mission and chatting with some of the

“We will make a short detour to sec a colleague of mine,” said Father Joseph. “He has a very dry parish, and seldom sees anyone these days, poor fellow. We will cheer him up.”

When we arrived we found out why Father Marcel saw so few people. He is a French national, under house arrest and forbidden to receive visitors. Father Joseph knew this, of course, but considered it no more important than the official seals on the school doors.

Outside the garden wall stood a little Egyptian soldier whose rifle and fixed bayonet were as tali as himself. He told us we couldn’t go in. Father Joseph waved him aside, cowed him with a machinegun burst of Arabic, and opened the gate.

Inside was another little soldier and a blue-clad policeman, also waving rifles and bayonets and also ordering us out. Father Joseph handed them his visiting card and swept past, the rest of us trailing after.

At the house door was Father Marcel himself, a skinny and visibly nervous little man who said at once, “Don’t come in. You mustn’t come in—you’ll only annoy the police.”

“Nonsense, my dear fellow,” Father Joseph boomed. “We have come to cheer you up, and you must give us some tea.”

`It is easier on the nerves, in this part of the world, not to get involved with the police"

Father Marcel, looking far from cheered, led us in resignedly and found us chairs in his office. There was another man there, clad in the nightgown that seems to be Egypt’s national costume, and Father Marcel told him to go out and make the tea.

While we waited Father Marcel talked in a gentle but plaintive voice about the troubles he was having under house arrest. For one thing, he said, they had taken away all his servants.

"What about the man you sent out for the tea?” someone asked.

"He is not a servant.” Father Marcel explained. “He is the secret policeman.”

Quite a while passed, and no tea. Finally Father Marcel went out to see what was wrong, and found the kitchen empty. He made tea himself and brought it back. We had just begun to drink it when the man in the nightgown returned, accompanied by a large man with a thick neck and enormous boots who would be recognized in any country as a sergeant of detectives.

The sergeant declined a cup of tea, sat down and waited. Father Marcel looked less and less cheered. The conversation lagged. As we finally rose to go, the sergeant bustled out ahead of us.

“Follow me,” he said, and roared off on his motorcycle.

At the police station, a stucco pile of enormous size for such a small village, he led us first to an army colonel who took all our names, enquired about our business and then politely bowed us out. Much relieved, we climbed back into our cars. But then a couple of guards ran out and made signs that we were not to go yet.

“Colonel no good," one said. “You see security officer.”

For an hour, that was all. Mac Dale produced his diplomatic credentials and I waved a sheaf of press cards, but it appeared that the guards couldn't read. Father Joseph boomed at them in vain. It got dark and very cold. We stood and waited.

Once the inspector arrived, as he did eventually, all was well. Mac’s credentials were properly impressive, Father Joseph’s voluble explanations acceptable; to cap all, the inspector turned out to be a former pupil of another member of the party. He delayed us only by insisting that a round of Coca-Colas must be sent for from the cafe at the corner.

We were back in Cairo, though, and fed and warmed, before we began to shake off the uneasy feelings that developed as we stood in the dark with our silent guards around us and wondered whether the inspector had gone home for the night. It is easier on the nerves, in this part of the world, not to get involved with the police at all.

I’lie afternoon with Father Joseph was not the first time our attention was drawn to Egypt's small but ancient Christian community. The first was an anecdote told by Brigadier Helmy, the Egyptian commandant of the camp at Abu Suweir, which Canadian administrative troops were operating for the UN Emergency Force.

(though he would no longer consider this a compliment) like the very model of a modern British officer. His mannerisms are an unconscious caricature of the British, and I suspect a good many British officers might feel some sympathy

with the story Helmy told over a pale whisky and water in the mess at Abu Suweir.

"I remember a Christian 1 had in my regiment once," said the brigadier. “He was a corporal. Qne day he came to me

as his commanding officer, and told me he wanted to become a Moslem.

“1 asked him why. He said he had been converted by the beauty of our great religion, that he no longer had any use for his own and, in short, would I please tell him how to go about changing b: faith. 1 said 1 would see about it, and ae went away.

“I asked one of my clerks to dig out the man’s file, get his address, then go find his wife and bring her to me. She came the next day. I asked her how she and her husband were getting on.

“ ‘Very badly, sir,’ she said. ‘He never gives me any money, he won’t help me support our children, and for the last six months he has been going around with another girl and threatening to divorce me. But I told him he can’t divorce me because we are Christian, and divorce isn’t legal for us.’

“I said very well, and told her to go back

home. Then I called in the corporal again, and when he stood in front of me I went and ripped the stripes off his sleeve.

“ ‘That is for telling me lies,’ I said, ‘and in addition you will have 168 hours at hard labor. But think of this: I am just a man like yourself, and you couldn’t even fool me. How did you expect to fool God?’ ”

The brigadier took a long sip of his whisky and water, and then concluded: 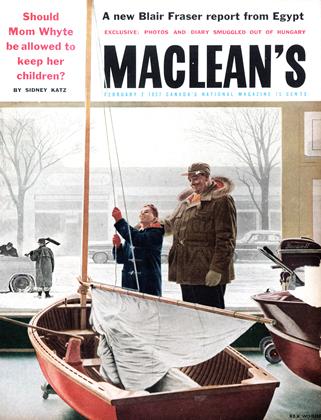