Click to View Article Pages
My most memorable meal: No. 17

It had been a rugged day. First the big bang, and all the doors flying off the hinges, and all the windows vanishing, and all the plaster falling off the walls and ceilings, and the wind coming in; and then standing in the snow toward Armdale with the dusty and bloody multitude, waiting for the second bang — the dockyard magazine — which never came off; and then coming back to the shattered houses and nailing carpets over the gaping window frames, and wedging crazy doors into place, and salvaging blankets from the wrecked bedrooms and dragging chairs close about the kitchen stoves and huddling in blankets as darkness fell.

And it was going to be a rugged night, for there could be no help till morning and now a blizzard was blowing in from the sea to cover the dead and make things tough for the living, including a woman, a teen-age boy and three girls at 53 Chebucto Road. I remember how tough it was because I was the boy and this was my family — my father was with his regiment across the sea.

We were all stunned by the big

bang — the Mont Blanc and her four thousand tons of TNT — but soon after dark the normal senses began to come back and I realized I was hungry and so were we all. I rummaged in the wrecked pantry for bacon, bread and tea. W'ith that we made the strangest meal of my life.

The only light was a candle that flinched and went blue like the rest of us at every gust of the storm. A powdery snow blew in between the carpet nails along the window frames. The food was frigid as soon as it left the stove. My sisters sat hooded in blankets, a mysterious little crew. My mother had a quilt about her. Her forehead and breast had been stabbed by arrows of flying glass and the blood had soaked through the bandages. We were all covered with plaster dust and sat like something by Saint-Gaudens, eating in silence and listening to the wind.

But what I remember best is not the wind or the scene, and certainly not the food. It was the courage in my mother’s face. You had to have that in Halifax on the night of December 6, 1917. jç 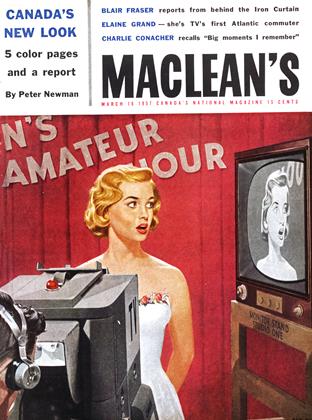