Full of life: A huge hole in her termite-ridden kitchen floor soon becomes the least of Judy Holliday's problems in this genial domestic comedy. She finds a sparring partner worthy of her mettle in Salvatore Baccaloni, who hitherto has restricted his funny business to the world of the opera. He appears as an exuberant Italian stone mason who, with the best of motives, immensely complicates the life of his author-son (Richard Conte) and his pregnant daughter-in-law (Miss H.).

House of Secrets: A competent, rather boyish crime melodrama made in

Britain and France, seemingly with an eye on the American market. The effect at times is somewhat like that of a well-behaved Mickey Spillane wearing conservative tweeds. A resourceful freighter officer (Michael Craig) gets hazardously involved with a gang of counterfeiters, whose dead handyman he acutely resembles. With Brenda de Banzie, David Kossoff.

Mister Cory: Occasional jabs of social satire and a well-judged performance by (he veteran Charles Bickford as a shrewd gambler enliven this Hollywood comedy-drama. Its title-role character (Tony Curtis) is a handsome slum boy who bluffs and charms his way into the big money.

The Wrong Man: Director Alfred Hitchcock forsakes his usual shivers-andgiggles formula to produce a piece of glum honest realism closely based on an actual case. It’s about a blameless bass fiddler (Henry Fonda) who is positively but erroneously identified as a holdup man, and it’s worth seeing, although not entirely satisfying. With Vera Miles, Anthony Quayle.

It’s Great to Be Young: The considerable talents of John Mills (as a tousled, music-loving teacher) and Cecil Parker (as the frosty new headmaster of Angel Hill Grammar School) arc squandered on this loud and corny British comedy. It’s amusing in spots but I found it fatiguing before the improbable end.

The Battle of the River Plate: Navalwarfare drama. Good.

Between Heaven and Hell: War. Fair.

Everything But the Truth: Romantic comedy. Poor.

The Power and the Prize: Drama of 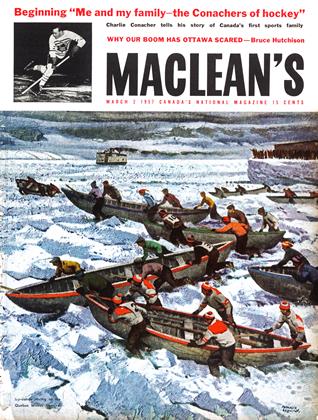