^ Will Canadian culture come with age?

Your editorial condemnation of the

* Do Russian women outmatch our “sexy” Canadian girls? How long does it take to cure the TV bug?

Social Credit party (Social Credit Too Owes Us Sanity, March 30) was a trifle unfair . . . Before judging SC cultural policies immature you might consider the youth of both party and provinces involved. Culture is not an overnight deal. Are we any farther behind in culture than our western neighbors across the BORDER?-RAYMOND

** You say: “Social Credit governs two of Canada’s most dynamic provinces. In federal politics its modest strength is growing.” . . . The Tories and the Liberals who vote SC in provincial elections will go back to the old parties in dominion elections. — E. R. WAIN-

Orchids to Robert Thomas Allen for pointing out Canadians’ disgusting arrogance. (Canadians Are the Worst Loudmouths, March 30) ... I was an addict too, until a plain-speaking Maclean’s editorial knocked it out of

me . . . We dearly delight in pointing to anti-Negro feeling in the South, and smirk as we inform Americans we can’t accept their money without discount.

American arrogance, at its worst, was only pro-American, never antiCanadian. — BARBARA REDGRAVE, VANCOUVER.

^ After reading Allen I looked at his “1947 octagonal Canadian nickel” and found that it has twelve sides, not

In your article glamorizing maple syrup (Why Don’t We Brag about Maple Syrup? March 16), Frank Croft says: “To the Canadian farmer it

means a gross income of thirteen million dollars. For this the farmer does next to nothing.” Consumers paying a stiff price must think somebody is robbing them . . . But consider this: operators with 1,500 trees have an investment of about fifteen thousand dollars in wood, land and equipment . . .

Also, cordwood does not just pile itself up beside the sugar house for nothing. And if Croft has ever waded knee-deep in snow through a sugar bush, he should know it’s not fun . . . GILBERT

Snow is so deep we hire a bulldozer to break roads. If we have a good season we may break EVEN.-MRS. ARTHUR W. GOGGIN, ELGIN, N.B.

The words “grubby and sexless as a colony of worker ants” describing Russian women in Blair Fraser’s Report from Moscow (March 30) . . .

are insulting. Also, I doubt their truth. In (he accompanying picture they look the same as hard-working women the world over—far better than the sexy creatures who seem to be the epitome of Canadian WOMANHOOD.-DORCAS W.

They kept their TV set

So Vivien and Earl Kimber threw out their TV set (March 30). Why bother? Our family left the set in its corner and it took the five of us only about three months to get over our addiction. Why all the fuss? . . . MRS.

* Poor Mrs. Kimber! No wonder she’s relieved that TV doesn’t come on until 4 p.m.—with nothing but CBC programs to WATCH.-IRENE E. WERT,

Are diplomats henchmen too?

serving for personal advantage. If this is so then are not Selwyn Lloyd and Lester Pearson also the henchmen of Macmillan and St. LAURENT?-LEO W. DASHENSKY, MARATHON, ONT.

We have been reading Charlie Conacher’s story, Me and My Family. Why are people like him so fond of boasting of their poverty-stricken past? Lots of people have had the same experience; they did more than play games. — N.

Beverley, old boy, you are a poor prophet. You told us China was unfriendly to Russia when Chou was starting on a friendly visit to the Kremlin. Next Eden would not resign—and he did. Now (Feb. 16) you try to scare us by asserting “the Soviet position is desperate—so desperate we should be prepared for anything.” Do you suggest that New York may become a second Pearl Flarbor?

Throw your prophecies to the dogs, Beverley; I’ll have none of them. —

Your article, The Changing Face of Canada (March 16), pointed up graphically the effect artists and architects can have upon the community . . . The artist must make public use of his talents, over and above the intimate expression more usual to his work . . . Some credit is due to the architects. If it were not for them the face of our cities would have changed but little, and certainly painters like myself would have had small chance to do what we have done. I am thinking of architects like Ned Pratt, who has done more than anyone I know around here to change architectural THINKING.-B. C.

In the Story of the Conachers (March 2) you show Charlie Conacher giving Chicago Black Hawks a pep talk. Could you give us their NAMES?-HEC MCCON-

The article, Is Our Case in the East Hopeless? by Blair Fraser (Feb. 16), is one of the most accurate I have read. 1 returned only a few months ago after almost five years in the Far East and know the conditions of which he writes.

The lack of consumer credit is one of the main reasons for our standard of living today. In practically all cases of low' living standards it is not a case of no money but lack of money at a low rate of interest.

I wonder what would happen to our standard of living if all credit were cut off and people had to pay about one hundred and twenty percent interest on loans.—E. W. GIBSON, HAZELTON, B.C.

Who’s to blame for inflation?

In his article. Why Our Boom Has the Experts Scared (March 2). Bruce Hutchison reminded us that Canada’s precarious financial position was due at least in part to the selfish and short-sighted course pursued by the public in general. One group ol businesses, however, is conspicuously exempt from criticism—the group that deals in monies, credits, stocks. Admittedly, one such business is mentioned — the chartered banks — but they are tucked conveniently behind the government and the Bank of Canada.

In fairness it must be conceded that these financial interests can only operate to our disadvantage to the extent that we insist upon being suckers; but at the same time their influence is much too great to be IGNORED.-R. NORMAN BUTT, NAKUSP, B.C.

I want to express my appreciation of Dr. W. E. Mann's article, The Church Should Meddle in Politics (March 16). His likening of the political field to “a foreign land to be missionized for Christ” inspires the thought that perhaps churches should train laymen in the practical application of Christianity to the political and business spheres, before sending them in as “missionaries.” Most of us would be in great need of help and instruction.

* Jesus commands that Christians be concerned with humanity; it is the second greatest commandment. How can a Christian keep this commandment and not meddle in POLITICS?-MRS. S. B. 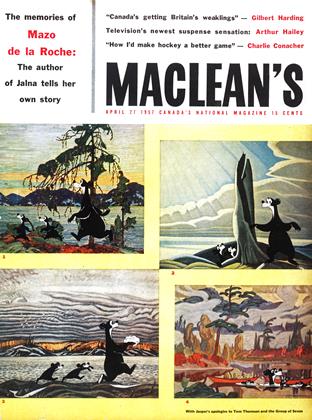