IN THE EDITOR'S CONFIDENCE

Click to View Article Pages
IN THE EDITOR'S CONFIDENCE

IN THE EDITOR'S CONFIDENCE

There’s no doubt that the art of

the composite photograph reached its ultimate perfection in the work of William Notman of Montreal, as a glance at pages 21 through 27 will confirm. But there's a sort of footnote to this curious phase of photography that we can’t pass by. In the Roaring Twenties the composite re-appeared, this time in the pages of Bernarr Macfadden’s incredible tabloid, the New York Graphic. These “composographs,” as they were called, re-created scenes the Graphic’s photographers couldn’t photograph. By Notman’s standards they were pretty crude, but they helped boom the paper’s circulation.

The first composograph sprang from a notorious divorce case. Kip Rhinelander, wealthy socialite, was suing his new bride on grounds that she’d concealed her Negro blood. To prove it hadn’t been a

secret, she stripped to the waist in court. The judge barred cameras, but Harry Grogin, the Graphic’s art editor, hired a showgirl and had her pose similarly attired in front of a group of Graphic reporters. He then superimposed heads of the jurors and the job was done.

Other composographs followed: Lindbergh landing in Paris; Valentino dying on the operating table; Valentino in Heaven; Joyce Hawley bathing in Earl Carroll’s bathtub of champagne; a murderer hanging; a woman shooting her husband; and the endless shenanigans of “Daddy” and “Peaches” Browning. Enough to make old William Notman turn in his grave, egad! Alas, the Graphic went under following the stock-market crash. The composograph, like its forerunner, the composite, has become a thing of the past, it 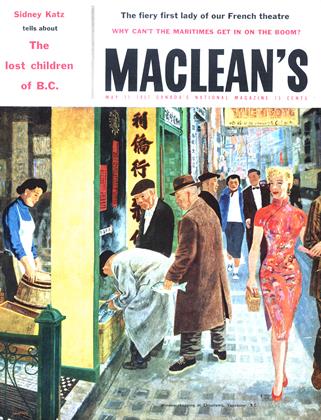