12 Angry Men: One of Hollywood’s more notable borrowings from television is this Reginald Rose drama about the soul-searchings of a murder-trial jury, with Henry Fonda (centre) as a stubborn holdout who insists on re-examining the evidence without bias or passion. A TV-trained director, Sidney Lumet, has drawn superbly realistic performances from a cast of virtual unknowns, including Jack Warden (left) as a cynical salesman and Joseph Sweeney as an alert oldster with a photographic memory.

Bachelor Party: Another TV luminary, Paddy Chayefsky, has written a worthy successor to his famous Marty, although it doesn’t pack as much emotional appeal as its predecessor. Some debt-ridden office workers embark on an all-night “stag” to celebrate an approaching wedding. Their rueful self-discoveries arc both sad and funny to behold.

Brothers in Law: Several of the amusing blokes who were in Private’s Progress (Ian Carmichael, Richard Attenborough, Terry-Thomas) are back in action in an enjoyable British comedy about a bumbling young barrister’s first misadventures at the bar.

Funny Face: There is an agreeable springtime-in-Paris flavor to this handsome Hollywood musical co-starring the aging but agile Fred Astaire as a society photographer and Audrey Hepburn as an intellectual chick from Greenwich Village who becomes the toast of the Left Bank. Kay Thompson, hitherto of the nightclubs, briskly portrays an imperious editor with a raucous sense of humor.

Spirit of St. Louis: Thirty years after Charles A. Lindbergh’s nonstop flight from New York to Paris officially ushered in the Air Age, Hollywood has come up with a solid movie about the exploit, with James Stewart plausibly depicting the Lone Eagle. A lengthy colloquy with a stowaway horsefly is one of the very few false notes in a basically honest and stirring narrative.

The Wings of Eagles: Drama. Poor. 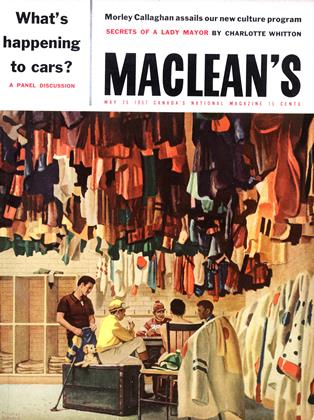