Yangtse Incident: The true story of the Royal Navy frigate Amethyst, which was attacked and crippled by Chinese Communist shore batteries in April 1949 while peacefully steaming up the Yangtse River toward Nanking, from the book by Larry Earl, a well-known Canadian journalist and Maclean’s contributor. There are some remarkably realistic scenes of naval warfare, with Richard Todd as the embattled British commander. Also memorable is a cat-and-mouse conference between this officer and a crafty Chinese colonel (Akim Tamiroff), although the latter’s Slavic accent is mildly disconcerting.

Doctor at Large: No. 3 in the British series of slaphappy medical farces has several slow or dullish episodes but enough lively bits to qualify it as a recommendable item. A novice physician (Dirk Bogarde) encounters all sorts of bizarre characters—doctors as well as patients—before getting his chance at surgery. With Donald Sinden, James Robertson Justice, Muriel Pavlow.

The Gold of Naples: A five-story package deal from Italy, overlong and at limes difficult to follow. Its best moments, however, prove that director Vittorio de Sica (Shoe Shine, The Bicycle Thief) is still a master of his craft. With Sophia Loren, Silvana Mangano.

The Strange One: Fascinating in the way that a killer cobra is fascinating, this is a nasty story about life in a Southern military academy, written for the screen by Calder Willingham from his own novel and play. End as a Man. The central role of a cadet who is a monstrous sadist is skillfully played by Ben Gazzara.

Town on Trial: Likeable though he is, John Mills seems implausible as a Scotland Yard superintendent who comports himself like an American “private eye” while investigating a pair of sex murders in a quiet English town.

Boy on a Dolphin: Treasure-hunting

Last of the Badmen: Western. Fair. 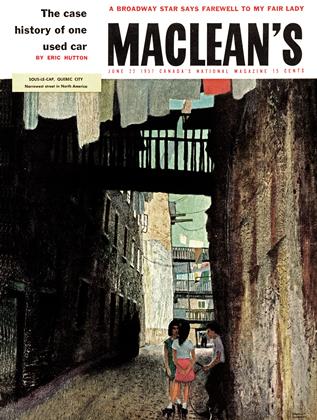