The chief reference librarian for a radio-TV network (Katharine Hepburn) tangles amiably with a “methods engineer” (Spencer Tracy) who installs an electronic brain to improve efficiency in her department. The Broadway comedy of two seasons ago has been turned into a somewhat draggy but pleasant movie.

The two leading players, a bit weatherbeaten but still deft and charming, work engagingly together.

HIGH TIDE AT NOON: Nova Scotia is again the setting for a British film by the writer (Neil Paterson) and the director (Philip L.eacock) who helped make 1954’s The Kidnappers so memorable. But their new effort is not nearly so impressive. It tries awkwardly to deal with the hard facts of lobster fishing and to dramatize a soap-operatic romantic triangle. With Alexander Knox, Betta St. John, Michael Craig, Flora Robson.

THE MAN WHO TURNED TO STONE: There haven’t been many worthwhile science-fiction thrillers in recent months, The Incredible Shrinking Man being the best of the crop. The present specimen is a silly, halfhearted fantasy about some eighteenth-century scientists who keep postponing death by draining off the “biolectrical energy” of the young women prisoners they kill.

THIS COULD BE THE NIGHT: Although heavily in debt to the late Damon Runyon for its world of warmhearted hoodlums, this is a brisk and beguiling comedy. It tells of a sweet little schoolteacher (Jean Simmons) who takes a spare-time job as the boss’s secretary in a raucous night club. Paul Douglas and an interesting young newcomer, Anthony Franciosa, arc the partners who fall under her spell.

THE WAY TO THE GOLD: The old, old story about an ex-convict (Jeffrey Hunter) who knows where a stolen fortune is hidden. In this case the tediousness of the narrative is occasionally relieved by a gallery of interesting minor characters.

Edge of the City: Drama. Good. 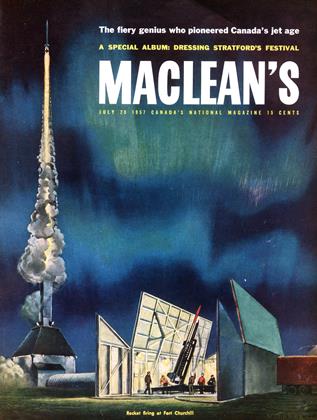