Late one recent Saturday evening, after a ceremonial dinner at the new Stationers’ Hall, I walked down Ludgate Hill and into Fleet Street—the Street of Ink, centre of London’s newspapers.

The presses of the Daily Express were roaring like Niagara Falls, belching out tens of thousands of copies for London and the south of England. In Manchester the Daily Express plant there was pouring out its quota and, in Glasgow, Express presses were doing the same. The next morning more than four million copies would be on breakfast tables across an entire nation.

Never have facilities for printing and distribution been so skillfully organized—yet never have British newspaper publishers been so worried.

Probably by the time you read this the Labor Daily Herald and the Liberal News-Chronicle will have amalgamated. Already the News-Chronicle embodies the former Daily News and the Daily Chronicle. If the projected amalgamation goes through it will be a case of a single newspaper instead of three.

One would have thought that there would be room for the Daily Herald as the official socialist newspaper, because even though its soul is socialist its body is owned by the powerful capitalist enterprise of Odham’s. Surely the vast membership of the Trades Union

Congress and the co-operative societies could sustain a single national newspaper, but it does not seem so. The party newspaper is a thing of the past. People do not want a newspaper that is blindly committed to one political party. That is why the Communist Daily Worker has to beg for pennies from faithful Reds to keep the poor little sheet going at all.

But there is another reason why even the successful newspapers, such as The Times, the Daily Mirror, the Express, the Telegraph and the Daily Sketch, are troubled. Increasingly, newspapers and magazines are feeling the challenge of television.

The most recent casualty on the magazine front is Sir Edward Hulton’s Picture Post. Well, what does it

“Its mounting victory over newspapers is not enough for TV; it has to know why it's winning”

matter whether there is one magazine less? In answer I would ask you to summon your imagination and see what happens to the staff turning out the last issue of their publication.

Proofs, placed before the editor and sub-editors, will be corrected and passed by men who, next week, will be looking for work in an ever-diminishing field. The editor has given his last okay. The signal is flashed to the machine room; the presses begin to roar as the copies pour down the chutes to the waiting lorries outside.

“Not a bad issue,” says the assistant editor as he looks with the pride of a professional at a copy fresh from the presses. Next week? Ah well, it will be fun to take the wife for a holiday at a small seaside hotel.

These are the men who are falling in TV’s mounting victory over Britain's press. But victory alone is not enough for TV; it has to know why it’s winning. With an almost ghoulish sense of topicality, distance runner Chris Chataway, who combines athletics with televised commentaries, questioned a panel of journal-

ists, including staff members of the stricken Picture Post.

Some of the comments were pretty tough and some of the punches were pretty low, but no one can deny the charge made by one of the panelists that the rise of the dominating proprietor has tended to reduce the editor to a secondary importance. In fact, it might be

said that now the order of seniority in the newspaper and magazine world is: 1, the proprietor; 2, the general manager; 3, the editor.

The explanation would be that competition has become so severe that the editor must come under the restraint of those who have to supply the finance. But the danger appears when restraint becomes authority over the editor and the general policy of the publication.

Yet there is one anachronism that deserves the consideration of all of us who live by means of the printed word. The sale of books is on the upgrade. No longer do book publishers gather at the wailing wall. It would seem that what the more intelligent level of the British public wants is to read something that deals with the eternal human values and not merely with the affairs of the moment.

These were the thoughts that crowded my mind as I left the ceremonies at Stationers’ Hall and wandered into Fleet Street. I had come to the hall as a Sta-

tioner and, therefore, a Freeman of the City of London—a distinction that permits me to wear a bayonet, and protects me from arrest for drunkenness. I had savored the quiet humor and dignity of a speech by a fellow Stationer. Prime Minister Harold Macmillan, whose family publishing house is an international institution which, incidentally, relieves him from any financial worries.

But it was the memory of a pageant we saw that evening that lingered with me. Apprentice printers, dressed in seventeenth-century costumes, had leaped to the centre of the hall and were there confronted by no less a person than Charles II.

“What is the enterprise of Stationer?" demanded the Merry Monarch who. on this occasion, was in a serious mood.

Proudly the senior apprentice answered, “Shakespeare, Milton and King James's Bible are our choice. Only thus can this balding rubbish be kept down.”

It may well be, I thought as I strolled along Fleet Street, that the words were more topical than they had at first seemed. ★ 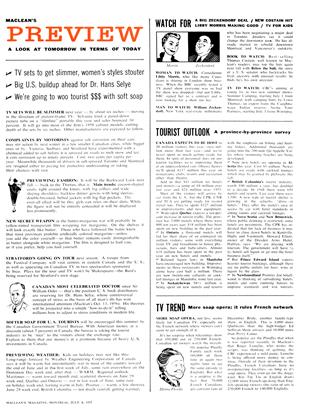